It’s the End of Libraryland as We Know It (and I Feel Fine) Matthew Chase, 2017 Showcase 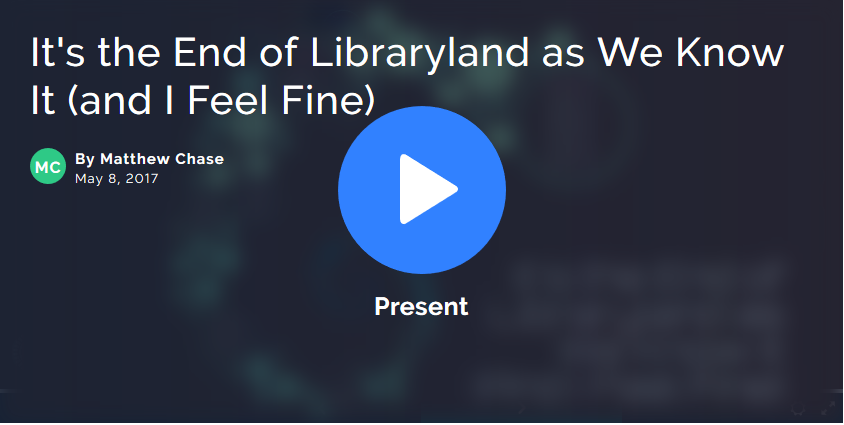 It’s the End of Libraryland as We Know It (and I Feel Fine): This multimedia presentation explores the possible futures of the Singularity and how libraries can dynamically interact with them. While there are many postulated definitions for the phenomenon, the Singularity essentially refers to a future period in which technological advancement is so rapid that human existence will be readically and irreversibly transformed. The inherent uncertainty of the Singularity raises critical discussion among proponents and critics of when and how this transformation may impact human life as we understand it. It also introduces visions of libraries in a post-Singularity future through cyborg librarians, library commonwealths, and the emergence of deep information literacy. The presentation shows how libraries are already working toward the Singularity in theory and practice in the way of maker spaces, citizen science, and early adoption of virtual reality and robotic technologies.

Inevitable Futures of Connectivity: A Comparative Book Review: This essay critically examines Kevin Kelly’s The Inevitable: Understanding the 12 Technological Forces that will Shape Our Future and Parag Khanna’s Connectography: Mapping the Future Global Civilization. While Kelly addresses the major forces spurring digital change for the next several decades and how we can shape emerging technologies, Khanna delves into the forces that will prompt collaboration among political and economic powers in a globalized society. Although Kelly and Khanna each have very distinct professional backgrounds and their work is grounded in different methodologies, the authors nonetheless share a common underlying goal: connectivity. This central theme of connectivity allows for a blended application of their insights. The authors convey signficant implications for the information professions, opening a key role in directing the future of an increasingly borderless and interconnected information culture.

Matthew Chase is the circulation manager at an academic library in Southern California. With several years of experience working in public and academic libraries, he is expected to graduate with a MLIS at San Jose State University in December 2017. He also holds an MA in Sociological Practice from California State University, San Marcos. His research interests include the emerging roles of librarianship in social justice, mass media representations of monsters, the development of digital folklore, and public discourses in the digital borderlands.