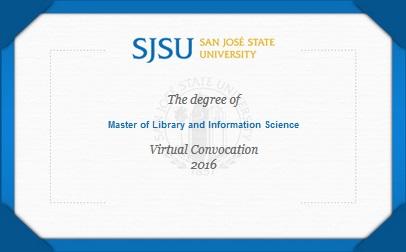 Community building, innovation, intellectual inquiry, and promotion of diversity are just a few of the traits recognized by the Director’s Awards for Excellence, given in honor of students graduating from the Master of Library and Information Science (MLIS) and Master of Archives and Records Administration (MARA) online degree programs at the San José State University (SJSU) School of Information (iSchool).

According to Dr. Cheryl Stenstrom, chair of the Student Scholarships and Student and Alumni Networking Committee, awards for graduating students are designed to showcase the variety of professional skills students learn at the iSchool. “The committee was very impressed with the high caliber of the applications,” she noted. “All the winners are great representatives of top new professionals entering the field.”

Figard is the winner of the Ken Haycock Award for Exceptional Professional Promise, and she has already been making a difference by developing innovative programming for teens at the San Mateo County Libraries. Recognized earlier this year as an American Library Association (ALA) Emerging Leader, she was highly gratified by her selection for the Haycock Award. “It is an incredible honor to be chosen as this year’s Ken Haycock Award winner,” she said. Figard was also quick to compliment her fellow classmates. “Many of my peers deserve this award just as much as I do!”

Figard further commented on how her studies at SJSU have prepared her for a career in information services. “I have learned so much as a part of this program and have grown immensely since I started. I can’t wait to see where my iSchool experience will take me next!” Currently working as a community specialist at the Belmont branch of the San Mateo County Libraries, Figard is also interested in finding ways to improve service to underserved populations, such as adults with disabilities.

Like Figard, Crawford, who is the winner of the Director’s Award for Excellence in Diversity and Inclusion, is also committed to improving access to library services. “Social justice has always been a big part of who I am, and I will continue to strive to ensure that ease of use and access to information are available to all persons,” she stated. “I’m honored to receive this year’s Award for Excellence in Diversity and Inclusion.”

Cheby, the winner of the Director’s Award for Excellence in Innovation, stated that her work as a teacher librarian has been profoundly influenced by her experience at the iSchool “I started in this position about four years ago and had no idea the opportunities it would present,” she explained. “It was through the work for the MLIS that I deepened my sense of efficacy and my belief that we need to uphold the highest expectations for information and technological literacy for our students. Whenever I doubted that, the research and class discussions reminded me why the work librarians do is so important, particularly for K-12 students.”

For Cheby, being recognized for her work is especially meaningful. “It is beyond flattering to be honored for innovation by the faculty whose innovation in librarianship and education inspired me to attempt to bring the same level of rigor to my position as a teacher librarian,” she said.

Anderson, winner of the Director’s Award for Excellence in Intellectual Inquiry, also noted the inspiration provided by iSchool courses. “Every class I’ve taken, from INFO 203 to the e-portfolio, has opened the door to new things I want to learn,” she stated. “I feel honored that the iSchool faculty recognized me for this award, and it encourages me to go further in LIS research.”

Anderson also stated that extracurricular exploration has also played an important role in her experience at the iSchool. “I’ve learned a lot being a content editor on the iSchool’s Student Research Journal and have found working with Anthony Bernier and the journal’s editorial team very rewarding,” she explained. “I think that doing things like working on or publishing in the journal and joining student groups really enriches the already first-class education students receive at the iSchool.”

Delawska-Elliott also had advice for continuing students at the iSchool “I think student group engagement greatly enhances the graduate school experience and is especially important in the virtual environment, where we rarely get to meet other students in person,” she remarked. “I would encourage all students to get involved!”

As winner of the Ken Haycock Award for Exceptional Professional Promise, Figard will be the student speaker for the SJSU iSchool Virtual Convocation ceremony on Saturday, May 21, 2016. She will also receive a citation and $1,000. Winners of the Director’s Awards for Excellence receive a gift certificate and a citation.

More information about the awards for graduating students is available on the iSchool Awards for Excellence web page. Congratulations, graduates!