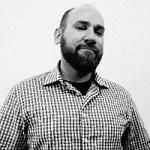 Recognized as one of the “New Leaders” by the Association for Information Science and Technology (ASIS&T), graduate student Jeremy McLaughlin is excited to get more involved with the professional association and develop his leadership skills.

McLaughlin began the exclusively online Master of Library and Information Science (MLIS) degree program at the San José State University (SJSU) School of Library and Information Science in 2014, and joined the SJSU ASIS&T Student Chapter right away. He was recently elected executive chair of the SJSU ASIS&T Student Chapter for 2014-2015.

The international association established the New Leaders Award in 2010, in order to “recruit, engage, and retain new members and to identify potential for new leadership.” As one of the 2014 New Leaders Award recipients, McLaughlin will receive conference registrations, up to $1,000 in travel expenses for two annual meetings, and professional mentoring in a Special Interest Group (SIG).

“I applied for the award because I thought it would be a great way to get involved with ASIS&T on a more formal note,” said McLaughlin. “We’re a very active student chapter, and I wanted to extend that in a focused way to a SIG and through more general involvement and networking at the conference.”

“I am really excited about this new opportunity and look forward to working with the Arts and Humanities SIG and representing SJSU at the ASIS&T Annual Conference—along with several other members of the SJSU ASIS&T Student Chapter—later this year,” said McLaughlin.

Eight awards are bestowed each year on ASIS&T members who are in their first three years of membership. According to the SJSU ASIS&T Student Chapter’s news release, this year’s awards were highly competitive, since the association received more applications than it has in the past.

The SJSU information school congratulates McLaughlin and the SJSU ASIS&T Student Chapter on this distinguished honor.