Cultural Memory and National Archives on the African Continent

Between September 2016 and November 2017, 46 students and alumni of the iSchool participated in a research project that resulted in the publication of the first ever International Directory of National Archives.

The Directory presents the findings organized into 4 sections: Introduction, History of the Archives, The Archives Today, and Current Focus. All but the introduction contains sub-sections such as Organizational Structure and Physical Infrastructure.

While the Directory makes a worthwhile reference work, the data gathered can be viewed through various lenses.  This blog post describes the relationship between cultural memory and national archives as it relates to the 54 nations of the African continent.

Memories of individuals fade with the passage of time, unless the individual has made a significant and lasting impact on the world stage.  But the collective stories of individuals can live on within the context of cultural memories—“those transformative historical experiences that define a culture, even as time passes and it adapts to new influences” (Rodriguez and Fortier, 2007).

Jan Assmann, a German Egyptologist, introduced the concept of cultural memory to the archeological disciplines to describe “the way a society ensures cultural continuity by preserving, with the help of cultural mnemonics, its collective knowledge from one generation to the next, rendering it possible for later generations to reconstruct their cultural identity” (Holtorf, 1998).

One may wonder how rich cultural memories can be transmitted from one generation to the next without losing much of their flavor.  Some early cultures engraved symbols and writings on cave walls, clay tokens, and stone tablets—informative and lasting but pale in comparison to the memories of other early cultures that relied on an oral tradition where events were passed on by one generation to the next in the form of tales, poems, song, and dance.  Today’s “memory keepers,” archivists and records keepers, are tasked with not only preserving evidence of events and actions taking place today but also gathering, protecting, and preserving evidence of events and actions that took place in the past.

In the 14th century, formal institutions for preserving the cultural memory began to appear, including the first office of the clerk of the rolls, register, and council, later known as the Lord Clerk Register, responsible for the national archives of Scotland. During the 16th century, Jacob von Rammingen, the father of archival science, wrote a manuscript to provide guidance for others responsible for “keeping” valuable records that would serve to memorialize actions taken. In 1790, as the result of the French Revolution, the Archives Nationales of France was established. Four years later the French National Convention passed a law setting out their role and creating a central depository for the national archives. The law set out the three main principles, which still apply today not only in France but in countries that have emulated this model:

In 1796, the law of 5 Brumaire Year V completed the French archival system, by setting up an archival service in each département’s chef-lieu. (Archives Nationales website, 2018)

Countries like Great Britain and France influenced the archival programs of the African nations they acquired as colonies. Although archival materials had been produced and preserved in some manner in African nations before the 19th Century, the establishment of the first formal archival institution in Africa occurred in 1815 when the British Governor of Mauritius appointed a colonial archivist.  Three additional national archives were established in the 19th Century: Egypt, Tunisia and Togo.

Djibouti, a tiny African Nation that serves as a gateway to the Suez Canal, is the most recent nation to establish a formal National Archives as the result of 2011 legislation. The Vision statement of the National Archives of Djibouti recognizes the role the archives plays in “the assertion of national identity, citizenship, collective memory, and national culture, as well as a testimony to the different periods of national history” (Vision, Law No. 132). Four additional African nations established national archives in the 21st century: Uganda, South Sudan, Morocco and Equatorial Guinea. The national archives of the remaining 45 countries took place during the 20th Century, between 1913 and 1996.

Despite the best efforts of citizens and professional archivists to protect their national heritage, political upheaval, struggles for independence, and warfare wreaked havoc on archival materials across the continent. In addition, when occupied countries gained independence, many of their records were transferred to colonial powers, leaving gaps in their cultural memory many are still attempting to fill.  Those records that remained after independence were often lost or damaged due to neglect, lack of trained personnel, and unforgiving environmental conditions.

Specific examples of events that impacted archival materials are:

Why Do Archives Matter?

One may wonder why there is such a strong desire to gather, manage, protect and preserve archival materials. The value of the archives (records) to nations can be conveyed through the mission statements adopted, for example:

Establish an integrated information management system in Eritrea so that the protection of the national memory is secure and that the documentary heritage of the nation is made readily available for consultation.

Acquire, preserve and provide public access to Zimbabwean documentation in whatever format, in an efficient and economic manner.

The BNARS exists to provide professional archives and records management service to all its customers in compliance with best practices globally.

Archives provide evidence of events and actions for practical reasons for those living on the continent, such as verifying land rights.  But stories from the past can also instill pride in the descendants of the African Nations whether living at home or abroad.  Have you seen the advertisement of a young woman citing the results of her DNA test showing that she is the descendant of a female African ruler?  The DNA results may point to ethnicity with a certain degree of accuracy, but it does not tell us the complete story about the lives of our ancestors. For some of us, the national archives may.

Colonization has been mentioned from the point of view of the colonial powers—the political and administrative value of the records created. But if we look at the same records from the perspective of the country colonialized, they may take on a different meaning.  The account of the exploits of the Angolan warrior queen, Nzinga Mbandi, is a prime example. 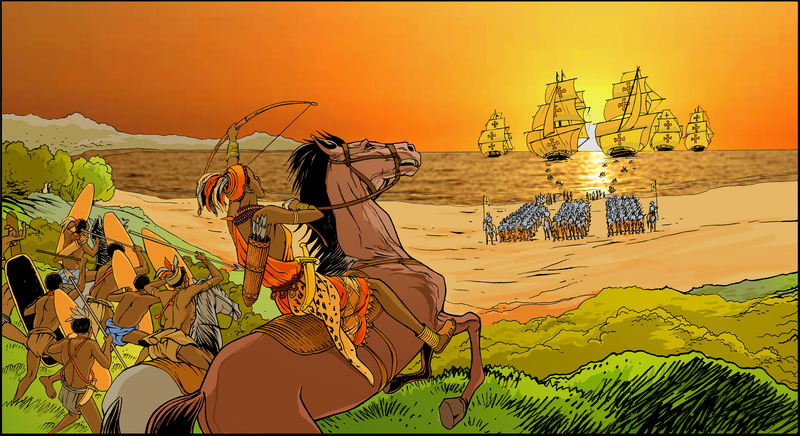 Born in 1583 to the king of Ndongo, a kingdom in modern-day Angola, Nzinga was fortunate to have a father who allowed both his son and daughter to witness his governance of the kingdom, including the guerrilla raids against Portuguese invaders.  Her brother became ruler upon the death of the King, and in 1622 he appointed Nzinga as his emissary to the Portuguese. Within two years, her brother died and she, facing stiff opposition as a female attempting to assume the throne, successfully took the reins of power. Nzinga’s courage was demonstrated by her willingness to lead her warriors into battle. By 1657, at the age of 74, having suffered severe losses due to decades of colonial and slave raiding attacks, she entered into peace talks with the Portuguese. Upon her death in 1663, the Portuguese were able to accelerate their colonial occupation (Banerji, 2016).

Of particular importance are the slave trade documents (with information about ships, numbers of slaves, costs, and process of transactions); administrative documents on health, education, agriculture; economics and finance data, colonial affairs; reports about occupation of the Angola, resistance of local leaders; relations between colonial authorities and local chiefs. (Personal communication, December 1, 2017).

The first International Council on Archives conference held on the African Continent took place in Cameroon in November 2018. The Prime Minister was in attendance to greet the participants and acknowledge the importance of the national archives and the value of the work of archivists. Leaders from all 54 nations and visitors from other countries attended to learn from one another. The host country shared their cultural heritage through song, dance, displays from the National Archives, and a reception at the National Museum.

For many of the national archives, progress is being made in the areas of legislation, physical environments, and training of archival staff; for example:

In spite of these examples, each of the countries face continuing challenges.

All countries would benefit by economic assistance, additional staff, and archival and records management training (including in the area of digitization of fragile documents). Other needs include:

It was my privilege to present a report on the findings of this research related to the 54 African Nations at the ICA Conference in Cameroon in November 2018. A blog article with additional information and images is posted to the IDNAproject blog.

The biggest lesson I learned in reviewing the data gathered for all 54 African countries is that in each either government employees or citizens were dedicated to gathering, preserving, and making available documents that are important for the study of the history of their nation.

It was exciting to speak with many of the individuals who had contributed to this project by providing information and reviewing entries about their national archives. They were eager to learn how their archival efforts compared to those of other African nations. They were energized by their interactions with their peers at the conference, and they were committed to working together to ensure the rich cultural heritage of the people of all African nations will be preserved.

It was both interesting and gratifying to hear the message received by some of the participants who attended my presentation and quoted my main message in subsequent meetings:  much work is yet to be done!

Holtorf, C. 2000-2008. Monumental Past: The Life-histories of Megalithic Monuments in Mecklenburg-Vorpommern (Germany). Electronic monograph. University of Toronto: Centre for Instructional Technology Development. Now available at http://wayback.archive-it.org/6473/20160819140755/https://tspace.library.utoronto.ca/citd/holtorf/index.html The page in question on Assmann is at http://wayback.archive-it.org/6473/20160819144418/https://tspace.library.utoronto.ca/citd/holtorf/2.0.html

Note: The source for all facts not accompanied by a citation is the International Directory of National Archives.