“The education you get from SJSU is all about what you put into it. Everyone that I know that dove in and got involved has only succeeded in life or in their career afterwards.”

Whitni Watkins never had any intention of working in a library. To her young self, the library was just a means to an end: the place to go for summer programs that handed out tickets to a sporting event. Then during her last semester in college as an undergraduate, Watkins got a job in the library,

“That’s when I realized that I really enjoyed the environment of the library,” Watkins says. “I was learning that libraries are cool.”

Life in Academic Libraries
Working in the university library creating research guides made Watkins realize that she loved working in academic library reference environments. As colleagues returned from the American Library Association (ALA) annual conference, she made the connection to the value of the MLIS degree. In short order, Watkins moved to California, got a job as library director at West Coast Ultrasound Institute, and a few months later started her first semester at the iSchool.

But she had mixed feelings about her job. She was elated to be working in an academic library but overwhelmed by her duties as a director in an institution that was not tech-forward. “To be honest I don’t know how or where I learned to do some of the things I did on that job!” Watkins admits. “I think I was too naive to really know what was on my plate. But it gave me a playing field I could do things with, and I had enough ambition to go forward.”

Things got better once she started iSchool classes, taking a sampling of courses to decide what she was really interested in. “I was a solo librarian at the trade school, and I did the job side-by-side with the degree program,” she explains. “I was able to take what I was learning in the classroom and apply it immediately.”

One of the things she tackled first was a complete automation of the library resources, and using skills from INFO 240, built the library’s website. That’s when Watkins realized where her passion lay. “Everything about it was problem solving…so the courses I took after that were really focused on [library] technology: coding, user experience, and social media. That’s where my ah-ha moment was.”

Watkins next applied for and got an integrated library systems (ILS) administrator job at the University of California at Riverside (UCR). “I went to a U.C. campus with 22,000 students, and within the library there were over 140 people working—and this was in a downsize!” Watkins recalls.

Watkins was supporting at least 120 UCR staff with hardware and software, back-end maintenance in all areas of library systems: circulation, cataloging, OPAC. She also conducted research on hardware to propose upgrades, and was up at four in the morning checking systems status. “Basically [I supported] anything that related to the ILS. It was busy, but awesome.” 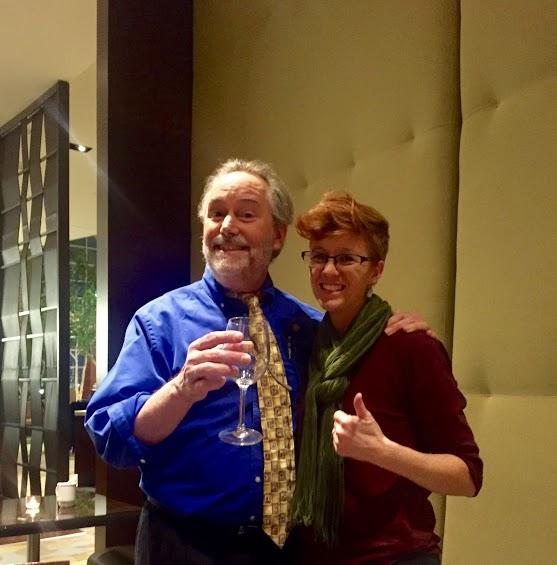 “The education you get from SJSU is all about what you put into it,” Watkins, pictured right with iSchool associate professor Anthony Bernier, says of her busy schedule. “Everyone that I know that dove in and got involved has only succeeded in life or in their career afterwards.”

Other iSchool courses that Watkins was immediately able to apply to her job included cataloging, which helped her get acquainted with MARC records for the record maintenance part of her job, and online searching. “It taught me to think and troubleshoot a problem, and to process it,” she explains. “Here’s the problem, here are the parts of it, now break up the question, and begin searching-how you narrow things down to get the answer you need for the question.”

“[Online searching] was completely transferrable in the sense that it taught me to think and troubleshoot a problem, and to process issues. Learning that thought process helped me transfer it into systems librarianship and maintenance.”

After a year at UCR, Watkins was laid off, and decided it was time to look for a job with a better work/life balance. “I started applying for systems librarian jobs because that’s where my career was projecting me,” she says. “I’ve never been one to say I’ll only apply for jobs in this area: if the job sounds cool, and I wouldn’t mind living somewhere, I’ll explore the opportunity.”

Opportunity came in the form of a job at St. Lawrence University in New York, where Watkins worked for a year as technical services and systems librarian. The library and central IT had just merged into the same division, and Watkins was kept busy.

“As a systems librarian you’re the liaison between IT and libraries,” she explains. “You have to be able to communicate IT needs and wants in a way that librarians can understand, and vice versa…I learned a lot of management skills [at St. Lawrence] and got to be involved with other projects I was interested in, like social media, and teaching coding workshops in the library, inspired by the hour of code. I was able to do a ton.”

Watkins had worked in academic libraries throughout her career, but one day realized she was no longer being professionally challenged. 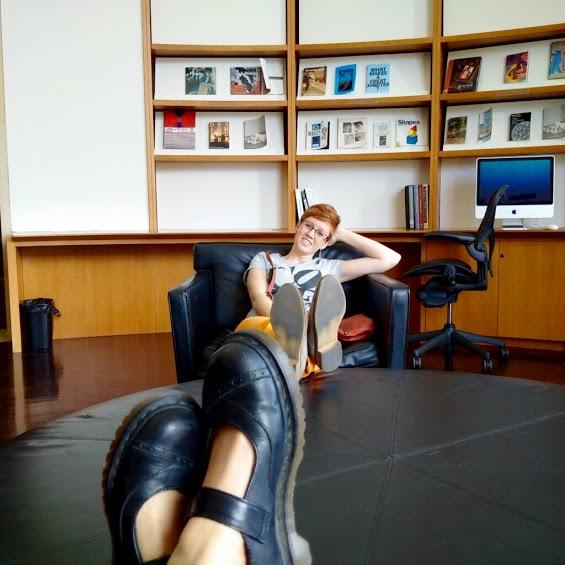 “I was getting burnt out…I’d pushed myself as far as I could,” she explains. “So I started looking outside of academics.”

She found Analog Devices, an integrated circuits processor whose motto is: ahead of what’s possible. “Now I’m a systems librarian in the Technical Marketing and Information Services group which is their internal research library, which involves front and back-end development, and I still get to deal with and enjoy the organization and thought process of libraries and information,” Watkins says.

And the company’s library is all virtual, an aspect that Watkins particularly appreciates.

“San Jose has prepared me for dealing with virtual anything. My [graduate] assistant work had me teaching faculty virtually all over the world in all aspects of technology, and that skill was 100% transferable. I work with all open source software in my job now, and if there’s something I’d like to change, I can do that, or learn how.”

Transferring to work in a corporate library setting has made all the difference for Watkins. “The expectation is to do big things, and I like that because it helps me to be motivated. It’s a big change from academics,” she explains. “There’s not enough talk about corporate librarianship and there needs to be more.”

“I get to use the skills I learned in school, do something I enjoy, and I get paid pretty well for it. It’s great!”