“iSchool taught me great skills that I can apply to work, and made me more confident in the work I do. I would recommend the iSchool to anyone.”

Vanessa Holm took the San José State University School of Information by storm. Diving into the MLIS program headfirst in 2014, Holm graduated in 2015, and during her whirlwind tour de force managed to participate in an internship, served as a peer mentor, and earned the Jean Wichers Award for Professional Practice, given to the student who “exhibits the most outstanding knowledge and ability in professional practice.”

Not only does Holm exhibit outstanding knowledge, she puts it to good use in her new role as CEO of West Lincoln Public Library in Ontario, Canada.

Sustainable Development From a Community Perspective
Before entering the library as a professional, Holm, who has a lifelong love of libraries a strong interest in community development, completed a Master’s degree in Sociology and worked at Community Futures, a nonprofit organization providing services to help rural communities “expand their economies.” “That’s where I organized and presented workshops on community, economic and skills development,” Holm explains, noting that the skills she picked up transferred nicely to libraries.

“Libraries are in a unique position to foster economic development in communities through skills development,” Holm says, “and through forming partnerships amongst people and organizations.”

Her first library position, as head of Ontario’s Bancroft Public Library, made Holm realize she needed a professional library degree in order to do her job more effectively. Holm oversaw every aspect of the library, and was working full-time at Bancroft while a full-time iSchool student, a courageous adventure in multitasking and concentration. “It was intense,” she admits. “It was like two full-time jobs, but I wanted to get it done quickly, so I decided to work hard.”

“I’m a huge fan of Ken Haycock,” Holm reveals. “One of the things he discusses has to do with having courageous conversations: being upfront and letting others know what you need. Part of being successful is being able to communicate, whether it’s with your work, library stakeholders, or with your family, and say: I have these responsibilities, I need to focus here, here’s where I need assistance.”

iSchool Outside the Box
Another aspect of the iSchool that Holm took advantage of were opportunities outside the typical classroom experience. By participating and interacting with students and LIS professionals in different areas, Holm was able to enhance her communication and management skills, both immediately beneficial to her everyday work.

As a peer mentor for core course Info 203 with director of online learning Debbie Faires, Holm supported new students coming into the program. “Being able to initially help students through that course and encourage them, that was nice,” she says. “For anyone who wants to do mentoring, or management of younger employees, it would be very useful to be a peer mentor.”

During an iSchool virtual internship with Librarians Without Borders (LWB), the Canadian nonprofit and iSchool partner, Holm worked to develop library programs to support LWB’s partner library in Chajul, Guatemala, and continued working after her internship as project lead for professional development for the organization.

Another passion project is working with the Ontario Public Library Association as editor of HoOpLA, the quarterly publication providing news to all of Ontario’s library staff and supporters. Holm is currently working on HoOpLA’s glossy print edition, which will be handed out at next year’s OLA Super Conference, fostering even more support and involvement in her library system. “It has been a fantastic opportunity to meet colleagues at other libraries in Ontario,” she says, “as well as keep up to date with library trends and best practices.” 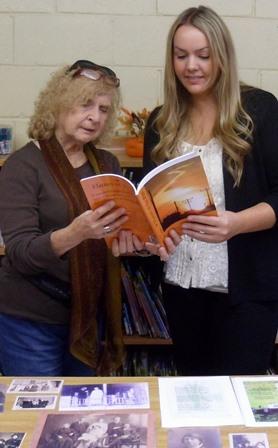 Award-Winning Library CEO
With her studies almost completed and helping her really engage her community and better the services at the Bancroft library, Holm realized that the iSchool truly enabled her to develop her professional librarian skills. So she took all of her experiences into account and applied for the Jean Wichers Award.

“I decided to apply for the award because I was able to see how putting the skills I gained while going to the iSchool into practice allowed me to transform Bancroft Public Library,” she says. “Better programming, better organization, more cardholders—I was getting such wonderful feedback from the community, I thought that I’d apply for the award.” The award and degree then encouraged her to expand her horizons and apply for a new CEO role at the West Lincoln Public Library in Ontario.

“Getting the library degree allowed me to transfer to a larger library system with more branches,” Holm says. In her new CEO role Holm oversees three libraries in the bustling Ontario community. “West Lincoln is one of the fastest growing municipalities in the area,” she adds. “It’s very exciting, and will lead to more opportunities for the library.”

Holm laughs that although the degree program went by quickly, overall she had a fantastic iSchool experience. “It taught me great skills that I can apply to work,” she confirms, “and made me more confident in the work I do. I would recommend the iSchool to anyone. I’m really glad I decided to go there and pursue my professional library degree.”