Anna-Carin U’Ren’s Adventures at ALA Annual 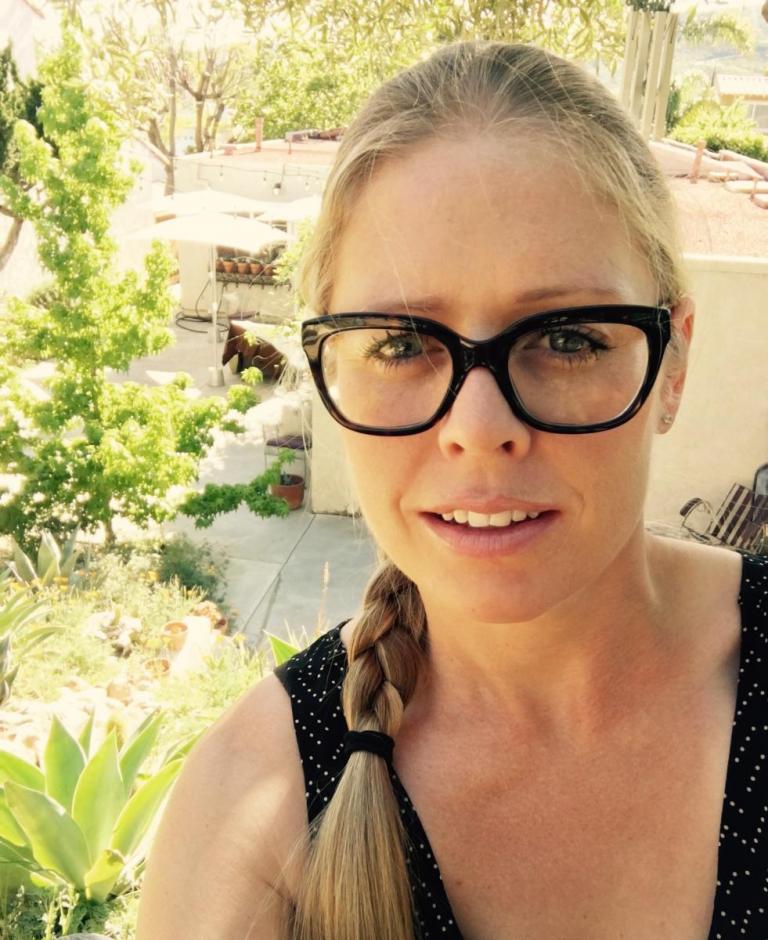 Anna-Carin U’Ren won a REFORMA grant to attend ALA Annual 2016 in Orlando, FL, and had the time of her life meeting her librarian and student peers.

Anna-Carin U’Ren was in her second year of the San José State University School of Information Master of Library and Information Science (MLIS) program when instructor Anthony Bernier let his class know about a REFORMA travel grant to attend the 2016 American Library Association (ALA) annual conference in Orlando, Florida. The grant application was that very day, but so great was her desire to go to the conference that U’Ren rushed home, wrote the essay and submitted the application. She was notified a few weeks later that she’d won the REFORMA grant – $250 to cover the conference experience.

“Everyone said it’s so worth it, you’ll meet all kinds of people!” U’Ren says. “I don’t work in libraries, I don’t have any experience, I’m a pharmacy technician. It was great to meet so many other librarians.”

U’Ren (pictured, right) started taking classes at the iSchool in Spring 2015, motivated by her interest in working with people and her love of books.

“As I’ve been studying and finding out how broad the field is my perspective has changed ao much. I’ve been trying to get myself out of the comfort zone and challenge myself [by] using new technology and trying new things.”

One of those new things was the ALA conference.

REFORMA, the national association to promote library and information services to Latinos and the Spanish speaking, was established as an ALA affiliate organization in 1971. With 19 chapters across the country, the group works with local library systems and state associations to recruit bilingual and multicultural library personnel, advocate on behalf of the information needs of the Latino community and develop Spanish-language and Latino library programming, among other concerns. One of their biggest programs is their annual scholarship drive, where “the association awards a number of scholarships to library school students that express interest in working with Latinos.”

U’Ren wasn’t aware of the group before her introduction to the grant, but once she learned about it, she became dedicated to REFORMA’s mission. Being in the group isn’t a requirement, neither is being Latina. Students simply express their need for funds to attend the conference, and write a statement about what they hope to gain from the experience.

“I wrote about taking a Materials for Children class where we did a group blog on white privilege,” U’Ren explains.” I’m a [white] parent and it made me think [while] buying books for my kids, or going to the library, about parents of color [who] can’t find books that reflect their kids experience or books they can relate to.”

U’Ren wrote about understanding the issue from the other side of the spectrum, what she learned from it and why she wanted to go to the conference. “It’s important to have friends and allies of different backgrounds who are friends of the cause, sympathetic and helping out,” she says.

Prior to attending ALA, U’Ren went to the REFORMA awards luncheon held in the East Los Angeles Library, which she notes has a rich history with the Spanish-speaking population, and not always a friendly one. There she met iSchool classmate Anita Martinez, who won the Elizabeth Martinez Scholarship given in honor of one of REFORMA’s founding members. Martinez and U’Ren arranged to meet up in Orlando at ALA.

“It was a learning experience being at the luncheon,” U’Ren says. “We got to hear Elizabeth Martinez talk. All the scholarships and grants are a benefit of people donating for the cause – I felt very fortunate to be chosen.” 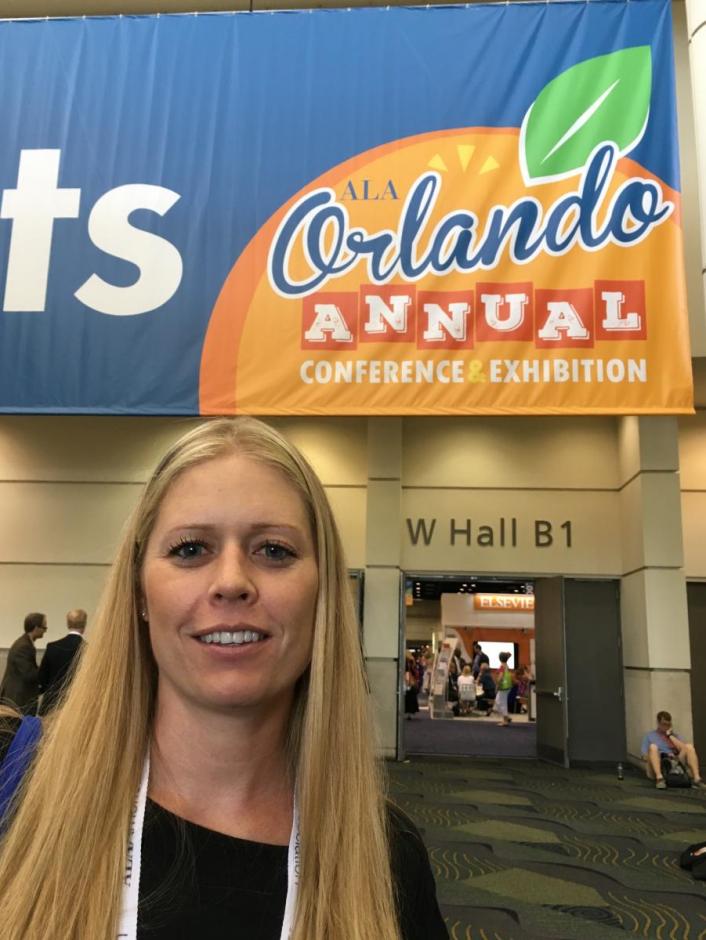 U’Ren went to the conference bolstered by the REFORMA scholarship luncheon, plans to meet up with Martinez, and armed with business cards to exchange with fellow librarians. For the first day of the conference she just walked around the exhibit hall taking everything in. She was saving herself up for the iSchool reception that night, where she got the chance to mingle with students, instructors and alumni.

“Meeting people from school was definitely a highlight,” she says. “I really enjoyed having that face to face contact.”

At the reception U’Ren met iSchool instructor Dr. Anthony Bernier, the one who introduced her to REFORMA. She was also happy to meet instructor Michael Stephens, after taking his course on the hyperlinked library and writing a guest blog on his website. U’Ren about her “Thoughts on Participatory Culture,” and her revelation, shortly after attending library school, of libraries as “participatory centers in their communities.” “I hadn’t realized that libraries are about so much more than just books,” U’Ren says.”They are community centers and active learning environments… the blog was about my changing and expanding perception of libraries.”

“I also got to meet [iSchool director] Sandy Hirsh,” U’Ren gushes, “and another alumna, Jennifer Chapman, who works at Concordia International School in Shanghai. We hung out going to booth to booth and I learned a lot hearing about [international librarianship], ordering supplies for her school, building the collection, working in China…it was a great learning experience.”

U’Ren (pictured, right, in the exhibition hall) “kept it general” at the conference, attending different events, picking up books and speaking to authors and illustrators. One of her favorite parts was when she stumbled into a panel of YA authors addressing how to depict sexuality or romance in YA literature; something of special interest to her because of Dr. Bernier’s class (among others), and her enjoyment of working with young people and children.

On the lighter side, U’Ren signed up for a comedy session featuring author, comedian and United for Libraries spokesperson Paula Poundstone. “There was wine, cheese and comedy writers talking about their books. I met all kinds of people and had a great time.”

After having a fantastic time at her first library conference, U’Ren is comfortable passing along advice to future student attendees.

“I went by myself and I was very nervous at first,” she admits. “Ask lots of questions and talk to everyone. The best thing I got out of it was meeting all the people, talking to them about what they do and meeting everyone from around the country. I learned a lot.”

U’Ren gained invaluable experiences from her time at ALA Orlando that she’ll bring back with her to her studies and library career outlook. She’s already considering the California Library Association (CLA) annual meeting in November, and can’t wait for the next ALA Annual.

“Everywhere I went I felt like I was involved with something bigger- that I was with my people. I’ve felt isolated sometimes, being at home and a student online. The best part was meeting all of my peers – they all descended on one place, and I felt like belong with these people, I’m part of the group. It made me excited to start looking for that job and get that experience. It was fun to be a part of something that big.”