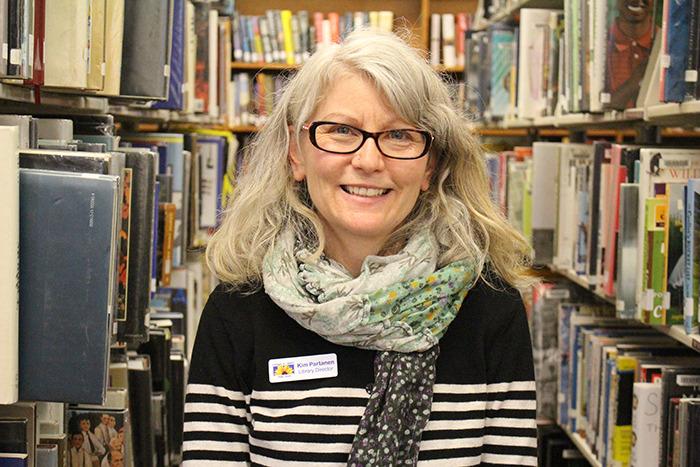 “Working in the library and information science field is a wonderful mix of learning new things every day and serving the community.”

Newly minted director of Castlegar & District Public Library Kimberly Partanen has a deep affinity for the library as a community gathering place. “I’ve had the opportunity to work in both academic and public libraries,” she says, “and I like seeing how people gravitate to a library and hold it dear to them.” On a more personal level, Partanen finds satisfaction in connecting people to the information whether that is something to read for leisure, or researching a term paper. Says Partanen, “Working in the LIS field is a wonderful mix of learning new things every day and serving the community.” This affinity led Partanen to a long career in libraries and, eventually, to seeking a MLIS at the San José State University School of Information.

Like for many prospective LIS professionals, obtaining an MLIS was a way for Partanen to advance in her career. “I really just had a long-term goal of being a librarian,” says Partanen. After working at libraries in various positions for 19 years while raising a family, Partanen was able to go back and finish her undergrad degree in 2012, followed by her MLIS in 2015. As a family-oriented individual, Partanen needed flexible programs that would allow her to be present at home and in class. “I was originally interested in San José State because it offered a fully online MLIS program,” she says. After digging into the wide variety of offered courses, however, Partanen found that the School of Information would offer her much more than just a flexible schedule.

Partanen began her LIS career as a public library volunteer in 1994 simply because books were so special to her and her family. “Then I met the library director,” remembers Partanen. “She had tattoos, wore combat boots and had a tongue ring. She completely broke every librarian stereotype, plus she was incredibly smart.” This meeting, coupled with her volunteer work, helped clear the path forward for Partanen. She continues, “So it was a combination of enjoying my work, visiting the library with my young daughter and the mentorship of this ‘unique’ librarian that put the idea of a MLIS in my head.” Time didn’t weaken this idea, and after taking a broad swath of classes for her undergrad degree, Partenan immediately enrolled at SJSU.

Now, as the director of a small public library in Castlegar, British Columbia, Partenan has a very hands-on job, and she wouldn’t trade it for the world. “I am responsible for the bigger picture things,” she says, “such as keeping the strategic plan on track and reporting activities to the provincial government for funding.” She also works the service desk, though, which puts her face to face with the community she serves. SJSU’s MLIS program helped prepare Partenan for such a range of responsibilities. Skills she learned in her course work in records management, information marketing and information literacy and learning have proven to be especially helpful in her role. Says Partenan, “[The iSchool] has such a wide variety of classes to choose from, which I liked. I could choose them very carefully.”

For those current, graduated or prospective students on the hunt for work in the LIS field, Partenan has a few measured tips. “I bookmarked all the libraries I was interested in working at and checked their websites continuously,” she says. “If I did get a job interview, I would take note of the questions asked so I could develop my answers at home [in case another library asked similar ones].” She continues, “I would also suggest knowing your work stories by heart. Memorize your challenges, successes, interpersonal ups and downs, greatest accomplishments, the things that didn’t go quite as you had planned, etc., so they’re all fresh for an interview.” These methods worked well for Partenan over her 19-year career in libraries.

As for Partenan’s professional future, having worked in libraries since 1994, Partenan sees herself staying put at the Castlegar & District Public Library. “I’m already late in my career,” she says. “Now that I’ve found my way back to a public library, I plan to stay.” Indeed, that affinity of hers for the community-centered focus of public libraries has stayed with her throughout her career. She feels most at home building outreach programs, partnerships and ties with her community.