“I had really strong professors. They were always there when I had a question for them, and they provided challenging work for me to do. Most of them had actually worked in libraries before or were currently working in libraries, so they were able to give everyone real-world applications for everything.”

Erin Berman has always had a passion for the work that public librarians perform in their communities, even though it took her awhile to identify her own path to public librarianship while pursuing her MLIS at the San José State University School of Information. “When I initially started [at the iSchool], I wasn’t sure which librarianship path I wanted to go down, so I started taking coding and database classes. All of a sudden it clicked and I wanted to be a public librarian.” Being submerged in the MLIS program and seeing the true breadth of the information profession allowed her to see where exactly she would like to position herself. Berman continues, “Since I was interning at a library at the time, I had the opportunity to take some of the practices that I was learning in class and actually implement them in real-time.” Having that opportunity to take theory from her all-online courses and practice it in the real world assured Berman that she had made the right decision.

Today, Berman serves as innovations manager at the San Jose Public Library, a position that allows her to serve marginalized and underserved people with such innovation projects as the Maker Spaceship, a state-of-the-art mobile maker’s space (shuttle). As part of the School of Information’s video series MLIS Alumni at Work, which highlights iSchool graduates in their workplaces, Berman shared with the community her experiences, responsibilities and information on her project:

Since the recording of this video, the Maker Spaceship (pictured below) has been completed. “Overall,” Berman reflects on the first big project in her current role, “[the project] went really smoothly. It took us almost exactly two to finish. One year of development and almost one year to build it out.” The community itself has reacted favorably to the project, according to Berman. “We’ve only done about six or seven events so far, but all of them have been well 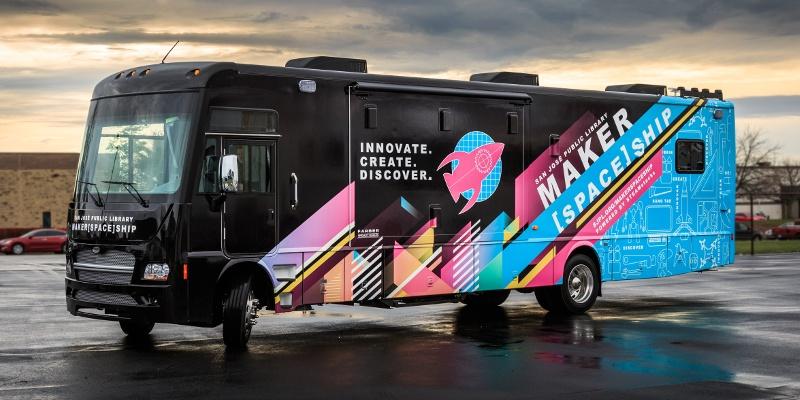 received.” Berman has also been the recipient of a couple awards since participating in the video series. She was named as one of Library Journal’s Movers and Shakers in 2016, which celebrates up-and-coming individuals who are innovative, creative and making a difference. Also, she received the Zoia Horn Intellectual Freedom Award with other members of the San Jose Public Library staff for their commitment to intellectual freedom and opportunity.

As for Berman’s future, she sees herself remaining in the public library field, even if she moves on from the San Jose Public Library to other career challenges. “I think it’s the curse of my generation,” Berman laughs, “that we like to move around and be challenged and try new things.” Berman continues, “But right now I have an amazing position where I get to try new things and serve the public in non-traditional ways. While I’m still early in my career, I don’t anticipate ever leaving the public library field.” She does, of course, see herself moving up into higher management roles where she can make larger decisions with more far-reaching results.

Berman credits her course work at the iSchool with giving her the skills needed to succeed, assuring potential and current students that SJSU knows it takes more than just base information professional skills to truly succeed in the field. “The key to my success,” Berman says, “was the real‐world application. It’s that need for having the theory put into a real‐world application because you need to be able to take those lessons and go see if they work in the real world.” After receiving her MLIS, Berman went abroad to teach English in Georgia. “I was living in a tiny little village in rural Georgia,” Berman recalls, “where I was the only person who spoke English. But I got to great things, like a library project with a local public library where we provided books to children who couldn’t afford any of their own.” It was during projects like these that Berman truly knew that she had taken the right path.

For more about life after the MLIS, check out Senior Museum Coordinator’s Career Path Began Right at the iSchool featuring Beth Atlas from this series.