“I selected SJSU because of its flexibility, because I wanted to be at a California school, and because once I made the decision to transition out of practicing law, I wanted to get started fast and jump on the next stage of my career. The convenience of online education – I could stay in LA, where I’d been living for quite a while, I could travel some, I could do internships where I wanted, etc. – was a big factor.”

When San José State University School of Information alumna and academic law librarian Elyse Meyers (MLIS,13) was practicing as an attorney after obtaining her law degree, she knew she loved three things about her job. I knew I loved research, client service and using my brain, says Meyers. I have also always loved teaching, academia and school. So, when Meyers realized that academic law librarians get to do all those things (and wear jeans to work), her path was clear. I also get to work with motivated students and faculty, and get to be on a campus, so I quickly realized that this was the career for me.

Since Meyers already had the Juris Doctor (JD), all she needed was the MLIS to transition to the research and reference side of academic law librarianship. Says Meyers,I selected SJSU’s iSchool because of its flexibility, because I wanted to be at a California school, and because once I made the decision to transition out of practicing law, I wanted to get started fast and jump on the next stage of my career. The iSchool provided the opportunity to do just that, as well as to become the law librarian she knew she was meant to be.

Lifelong Learning
Today, Meyers works at the Hugh & Hazel Darling Law Library at UCLA School of Law. “I am the Assistant Director [of the] Research Assistant Program,” says Meyers (pictured right with 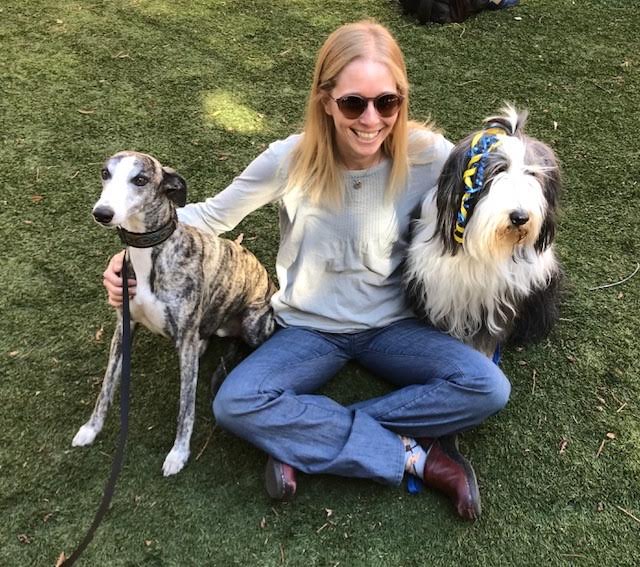 therapy dogs brought in to help students relax). “When I was last profiled, I was splitting my time between two libraries, but in May 2014, I started in a newly created full-time librarian position at UCLA: Research Services Librarian.” Meyers’s title only changed recently, but her duties remain similar. Explains Meyers, “I co-direct a program that hires, trains and supervises law students who we hire as research assistants for the law faculty.” She continues, “my boss and I match RAs with the professors and we teach the RAs research and professionalism skills.” Meyers also co-teaches an upper division law school course called Advanced Legal Research. In addition, sometimes she finds herself at the reference desk or doing faculty research projects.

Meyers’s course work while in the MLIS program at the School of Information still influences her work today. “I still recommend INFO 244: Online Searching class to anyone thinking about the program,” Meyers enthuses. “The foundational skills I learned in that class underpin a lot of what I now do and teach!” Meyers also singles out working with iSchool professor Dr. Anthony Bernier on the Student Research Journal as perfect preparation for the wide-ranging responsibilities she has today. “I support faculty in doing their own writing,” she says, “so understanding something about academic journals really helps. Working closely with a professor, then, was great experience for doing it in my current job.” Although Meyers sadly notes she doesn’t talk to Dr. Bernier as often as she should or would like to, she says she thinks about him and his lessons a lot.

Internships: The Way Forward
The advice that Meyers gave those looking to follow a path like hers back in 2013 remains as true and relevant as ever. “Internships were the key to my success,” she says, “partly because I came into librarianship with just a law background and no library experience.” Meyers interned with USC and UCLA’s law libraries, and both of them became jobs while also building lasting professional relationships. “I also believe,” Meyers says, “that the law librarians’ professional associations are a good way to meet people doing all different kinds of law librarianship, to build connections and to learn more about this field.” Meyers is a part of the Southern California chapter (SCALL) of the nation-wide American Association of Law Libraries (AALL), and the Western Pacific chapter (WestPac).

As for Meyers’s future, one thing she knows for sure is that she will grow in her current career. “As I do,” she says, “I am excited to keep getting better at research, to take on more teaching and to learn more about instructional design and pedagogy, and to continue to be of service to academia and big ideas.”