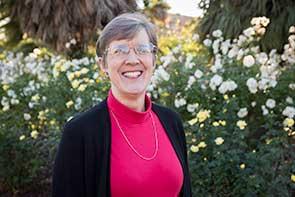 “To those of you second-career people…it isn’t easy, but it CAN BE DONE…and it is worth doing!”

Ann Agee is a native of the Bay Area and a current resident of San José and, by her own admission, has found her calling in librarianship. Ann’s love of libraries started early as she recalls making the exciting journey downtown to the main branch of the Oakland library where she would marvel at the banks of library card catalogs. With a cherished memory like that, Ann’s career was written in the cards.

Before beginning her career as a librarian, Ann completed a BA in English at the University of California at Davis and built a career in the field of textbook publishing. Ann worked in marketing for West Publishing, which specializes in legal textbooks and also the academic publishing company, Wadsworth.

After years in the publishing industry, Ann happily took the opportunity to step out of the workforce to stay at home and raise her children. This career ‘interlude’ (which stay-at-home parents everywhere would agree actually constitutes an entire career in and of itself), ended up serving as an entry into the field of librarianship when helping out in her children’s classroom opened up the opportunity for her to take a position as a school librarian. “I just fell in love with it,” says Ann,” and decided THIS is what I want to do!” That decision brought her to the San José State University iSchool, where she earned her MLIS at the age of 48. Regarding this second career path, Ann says, “It’s not easy…but it CAN be done…and it is worth doing!”

Ann began her librarianship career as an intern for the King Library while attending the iSchool. That internship opened up the opportunity to be hired as a part-time librarian at the library, and she eventually applied for and became a full-time librarian. She says she “imprinted on SJSU and never left!” Ann further commented that working at SJSU and the King Library specifically is wonderful because it is “such an unusual and fascinating place” due to its joint library status which it shares with its municipal counterpart, the San José Public Library System.

As Ann explains, “San José should be proud of itself” for managing this unique partnership between city and state entities as it is rare for libraries of King’s size—let alone all libraries in general—to be joint libraries (only 2% of libraries overall have this joint status, according to Ann).

Part of Ann’s current job, which she “jumped up and down and waved her arms” to be considered for, is as the iSchool’s subject specialist librarian for the King Library. She also serves as the subject specialist librarian for the Lucas College and Graduate School of Business. Her dual role on the King Library staff is especially labor-intensive because these two areas of specialty are strongly research-related (the iSchool) and, as she puts it “oddly specialized” (the Lucas School).

For the School of Business, her job involves relying less on journal articles and more on current-day news reports. In order to stay on top of current trends in information and business news, Ann relies heavily on listservs (“librarians,” she says, “are crazy about listservs”) to keep her quickly and efficiently updated. She follows Buslib-L for her Business Librarian needs and ILI listserv for her iSchool topics. Ann recommends that iSchool students take a look at the American Library Association Listserv page in order to explore the many library interest groups that exist. She also keeps current by following RSS feeds. She manages her sources through the news reader service feedly.com, which she also recommends for use to iSchool students.

Ann’s job is so busy and varied that when asked for a typical “day in the life” scenario she is unable to provide one. Her work flow is very much tied to the academic calendar, and while a day during the school year might involve responding to an online student’s request sent from China at 2 a.m. (no, she did not respond in real time!), summers are for catching up on academic housekeeping and pursuing her many research interests (past research topics include using rubrics to assess information literacy skills and how to combat the rapidly increasing prices of textbooks). Ann’s complete and impressive list of research can be found here.

Ann is happy to conduct research interviews or help with any library or information questions via email or Zoom with her iSchool students. Her warm and friendly manner make her a welcoming resource, and she encourages students to reach out to her with research and information questions at any time (although she may not respond immediately to a middle-of-the-night call!). For students looking to explore the King Library resources, Ann also has created libguides and tutorials that will be very helpful in guiding your search. We are lucky to have Ann Agee here at SJSU.