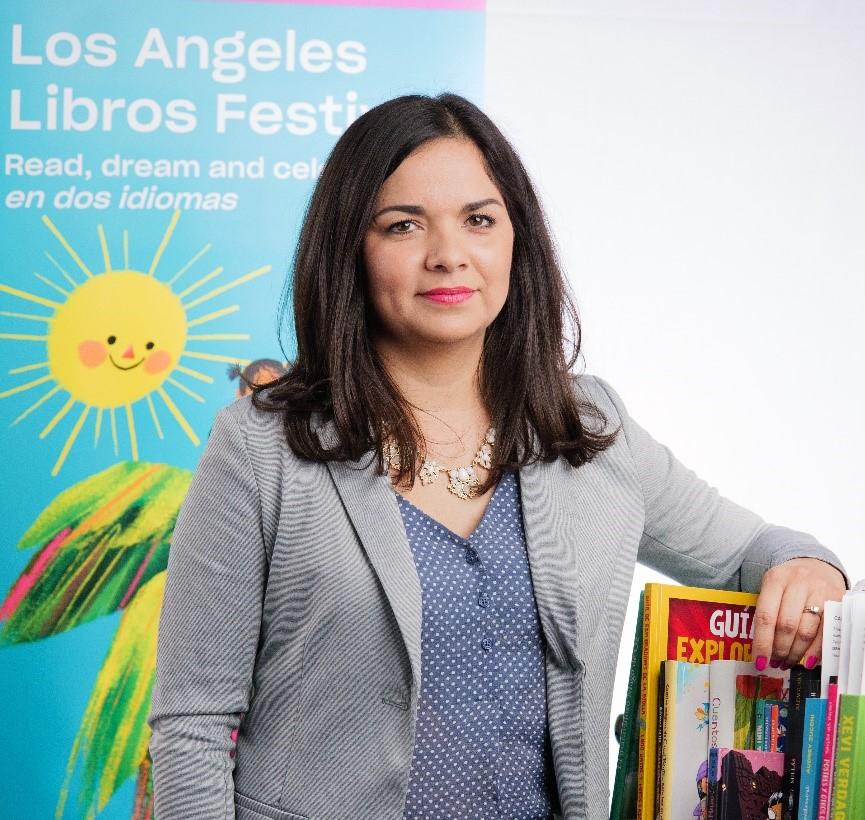 “Being the Multilingual Collections manager allows me to continue to raise awareness about the library that connects, engages and resonates with diverse Angelenos.”

iSchool alumna, Anna Avalos was recently named one of Library Journal’s 2020 Movers & Shakers. She says she is “proud to represent the entire hard-working staff of the Los Angeles Public Library,” with this honor. Anna’s work with multilingual communities, particularly the Spanish speaking community, makes it easy to see why she was chosen by the Library Journal for this recognition.

Through her work as the multilingual collections manager of the Los Angeles Public Library (LAPL), Anna has done much to expand the various language collections across all 73 LAPL branches, and to increase access to materials for the Spanish speaking members of the community.

One of the things that Anna did to help to increase access to materials was forming the Spanish Language Translations (SLT) team. The team was officially created in 2018, though the individuals in the group had been doing translations for the library for years. Made up of seven LAPL librarians, Anna explains that the SLT team works to translate “policies, flyers, forms, brochures, web pages and more for the entire LAPL system” as well as creating original Spanish content.

With the COVID-19 closure, the library and the SLT team had to “quickly change gears,” but Anna reinforces that the goal “to inform patrons about different services that they can take advantage of” remains. In this vein, she has been concentrating on promoting and increasing the Spanish digital collections.

Although the library already had a Twitter account, the decision was made to start an Instagram as well. Anna states that this has allowed them “to further promote our online services and to be able to inform our Spanish speakers about what’s going on in the library.” Additionally, Anna has been contributing to the LAPL’s weekly Facebook “Pregúntale a tu bibliotecari @ en vivo” sessions, which serves to “inform and teach Spanish speakers how to use different resources from learning a new language, new craft, to how to help their children with schoolwork using the library database.”

In September 2019 the LAPL and several other organizations held a hugely successful bilingual book festival, Los Angeles Libros Festival. While Anna states that undertaking this project was “a little scary,” she was greatly helped by having a team “very knowledgeable in different aspects of the planning stages.” Working together, the team was able to produce an amazingly successful event.

The idea for this festival originated with book fairs organized by REFORMA, but the planning team decided that they wanted something more than a traditional book fair. Anna describes what they ended up creating as an event full of “performances, storytime’s, workshops, book signings and more” all aimed at bilingual and bicultural families to “promote literacy, reading and a deeper understanding of library services.”

When they began planning the event, they had started with the idea that they’d “be happy if 500 people came.” But, as planning happened and word of the festival began to spread, they realized that they had to start preparing for a larger crowd. They ended up seeing more than 5,000 individuals at LA Libros Festival. Much to Anna’s excitement, even the city mayor and his daughter came and enjoyed the festival.

Plans for the “second edition of LA Libros” are underway, though due to COVID it will have to be a virtual event.

Helping People in Their Language

Anna got her first job in a library when she was in 9th grade. That was just a summer job, she explained, and it wasn’t until she was working in the same library in a part-time job while getting her bachelor’s degree that the idea of librarianship as a career path started to take hold. Anna soon became aware that she was the one the Spanish speaking patrons always approached with questions. “They were always happy to find out that I spoke Spanish and that we had a Spanish collection,” she recalls, and helping them “reminded me of my family.” She loved being able to help. “That’s when I decided to become a librarian,” she exclaims, “a Spanish speaking librarian to help people like me, like my family.”

From the start of her time in libraries, Anna has had a specific interest in “expanding Spanish collections and resources for Spanish speakers.” Anna explains that her job as Multilingual Collections Manager has allowed her to “continue to raise awareness about the library that connects, engages and resonates with diverse Angelenos.” She enjoys being able to reinforce relationships between the community and the library and states the importance of working to “encourage as many patron visits in person and online as possible.”