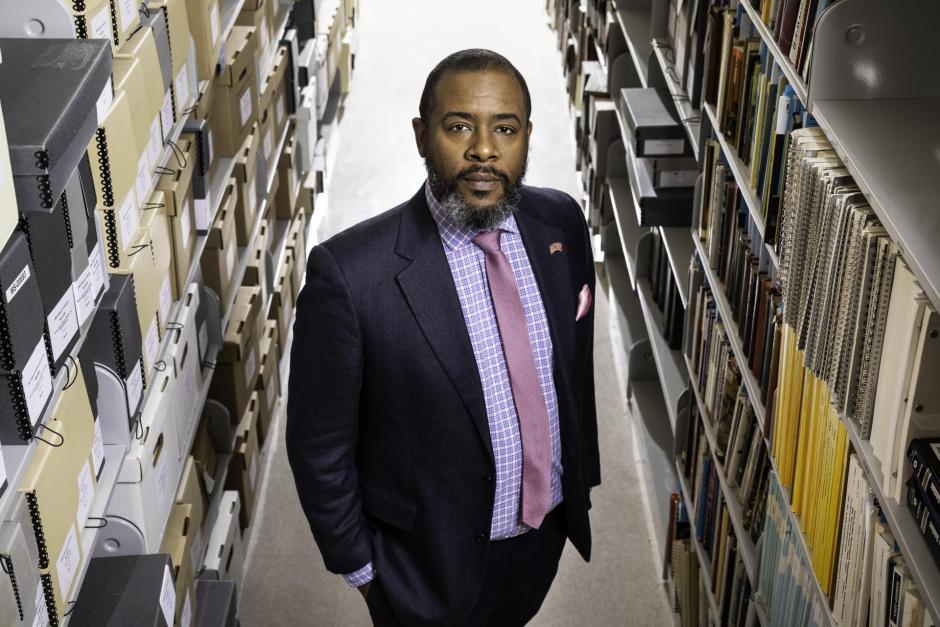 “If you want it, you can get it. If I can get it, you can do it. I’m the least likely person; I have a background in audio. An audio engineer became a metadata person, a linked-data professional. It’s not a long jump, but it is a jump. You can do it.”

Working at the University of Nevada, Las Vegas (UNLV) as the Special Collections and Archives Metadata Librarian, Darnelle Melvin has been heavily involved in implementing linked data “as a way to reconcile large legacy collection metadata.” A self-proclaimed “linked data nerd,” he and a team of other librarians and library technologists put together a book, Linked Data for the Perplexed Librarian. The book aims to demonstrate to librarians that linked data is not inapproachable and to provide some basic understanding.

From Audio Engineer to Metadata Librarian via Library School

Darnelle came to library sciences out of a career as an audio engineer. Born and raised in Southern California, he worked “on the technical and managerial side of things in the music business.”

What he did not realize at the time was that much of what he was doing was metadata and preservation work, such as keeping detailed notes of the highly technical work involved with recording sessions. That work evolved into ”doing digitization of legacy analog formats,” because Darnelle was “one of the few people who still had the old hardware.” After a client approached him about mold issues on some analog tapes, Darnelle found himself doing research on preservation. His research opened up new ideas about his work, leading to a decision to pursue an MLIS degree with a focus on preservation and audiovisual archives.

Already in his forties and with no experience working or even volunteering at a library, Darnelle was nervous about being able to get a job after finishing his degree. Balancing a full-time job and a family, he embarked on the MLIS program with the intention to use his time well and really listen to his mentors and professors. The iSchool at San José State University is completely online which Darnelle saw as a great advantage. “You literally have the experts,” he states, “every class, you have the expert in that sector of librarianship.”

Not knowing exactly what area of librarianship he was going to end up in, he became very strategic in his course selection so he could compete for any position in the job market. His first cataloging class turned into an “aha” moment. I really liked it,” he exclaimed, “and I learned that I was pretty good at cataloging.” Towards the end of his time at the iSchool, he got an internship that quickly turned into a job as a contract cataloger.

Darnelle, “as a metadata transformation expert at UNLV,” has taken the conversation of digital collections and linked data to the next level. “My job,” he explains, “has been moving from string text-based systems to entity-based system which is the basis of the linked data [work]. It’s exciting work; it’s hard work. It’s very challenging but it’s wonderful. I love it.”

One of the challenges in his current job is that they are “a mass digitization lab that supports the teaching and digitization efforts of special collections and archives.” Between internal projects, scan on demand, grant projects and partnerships, there is a lot of digitization activity, which means the scope of the work has expanded beyond what their system can support. Darnelle emphasizes that the lab needs a system that not only does administrative metadata, administrative management, preservation work, born-digital and digitized, accession workflows, but that can also support linked data.

While the education he got is invaluable and highly important, “it’s not just about being a great metadata librarian or being a great cataloguer. There’s a bigger picture.” His work involves large scale planning which includes management, working with linked data, data remediation and integration, in support of large-scale system migration. “There’s all this activity in linked data. It’s challenging, and a lot of us are trying to implement it – that’s the cool thing. My workflow happens to be metadata management, but you could be applying the same principles in a different part of the org chart.”

Darnelle emphasizes the importance of staying connected with the people who are working in the field and getting involved “as early as possible. There’s been a lot of change happening in the profession [and] within the American Library Association (ALA).” The ALA has a variety of special interest groups, which he encourages students to investigate and get involved in as one of the multiple ways to connect with the community at large. He also recommends social media as a means to connect professionally: “Library Twitter is real… if I get depressed in this current isolation state I turn to Library Twitter, that stuff’s hilarious.”

Darnelle further recommends MLIS students “study hard, get the experience, seek mentorships and have fun.” He highlights how he stumbled into his new career and found a new calling in life. “For me, I want to serve people, and [being a metadata librarian] is like me giving back. Luckily, I was blessed that I had some really good professors who gave me some really good advice.”