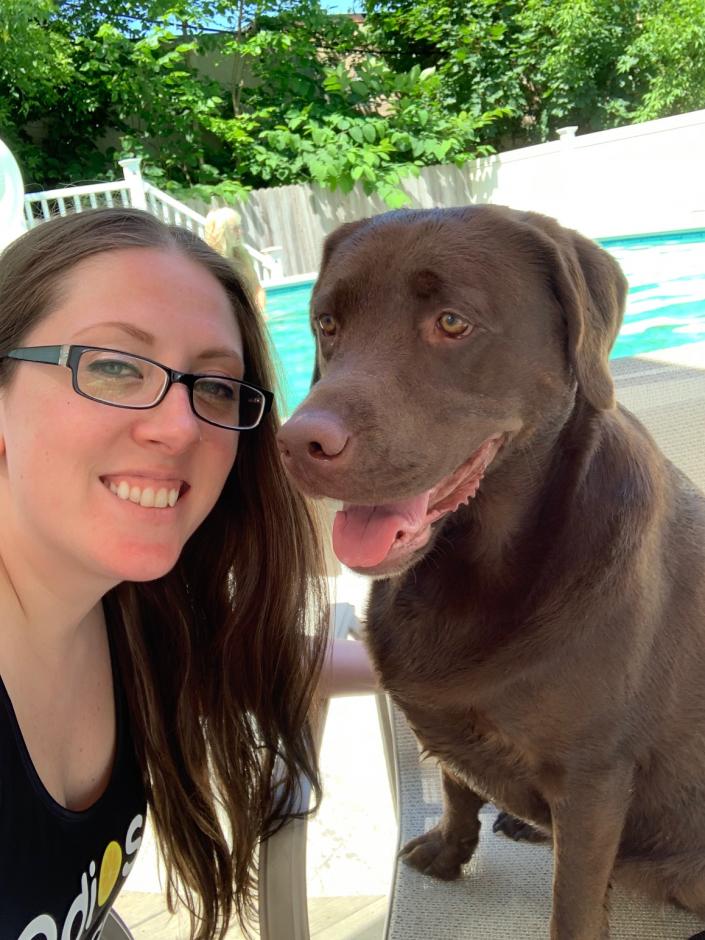 “My iSchool education opened my eyes to what is possible in the library field.”

Discovering one’s career calling often involves a process that plays out over the course of many years. Jenny Shonk would definitely agree that her choice of librarianship as a career involved such a process. As far as timing goes, however, she really is the exception as, unbeknownst to her, Jenny’s career path in librarianship was actually set while she was still in high school!

Jenny was born in raised in Cortland, New York and happily spent her high school years working as a library page for the Cortland Free Library. She left her library work behind, however, when she went on to pursue her undergraduate studies at SUNY Cortland to pursue a degree in early childhood education. She recently shared that she had “never really thought libraries could be a career option” in the same way that teaching would be. Her library background came to the rescue, however, when she graduated at the height of the recession and realized that she would need to get creative in order to find a job in the difficult hiring climate. Jenny appealed to her former employer and was able to rejoin the Cortland library staff on a part-time basis. Shortly after she was hired, a New York State grant brought the library a new computer lab which permitted Jenny to expand her part-time role at Cortland to run the lab in addition to her library staff duties.

Three Times a Charm For a Career in Librarianship

During this time, Jenny also earned a Master’s degree in Literacy Education from her undergraduate alma mater, SUNY Cortland. With this additional degree, Jenny left her library work to take a job as a teacher’s assistant at an elementary school. After just a year away from her library work, however, Jenny realized that despite what she had thought when formulating her initial career plans, the library field held the job opportunities she had been seeking all along. With this realization, she again returned to her library roots and in 2013 interviewed for a job as the assistant to the Cortland Free Library Director. Not only did Jenny get the job, but she also found a “mentor and idol” in library director Kay Zaharas and a new career path.

With her mentor’s counsel, Jenny turned her sights on advancing her library career with a library and information science master’s degree. For Jenny, there was only one choice: San José State University’s iSchool. Jenny knew about the iSchool through the outstanding work done by faculty members, including Michael Stephens, Meredith Farkas and Patty Wong.

While Jenny had experience working in the library field, she quickly realized that there was much to learn about the profession in her role as an MLIS student. As Jenny describes it, “Working at a public library, you are busy every day and don’t have time to think about the profession. Studying at the iSchool opened my eyes to what the library field has to offer and helped me to look at how to do my job differently.”

To help with her education, Jenny shares that it was a dream come true to learn from the professors who attracted her to the iSchool and names Dr. Stephens’s INFO 287 – The Hyperlinked Library: Emerging Trends, Emerging Technologies as one of her most valuable learning experiences.

A second class, Patty Wong’s INFO 282 Seminar on Grant Writing opened up the opportunity to use the course content to create her most successful training program, a grant-writing webinar, for the librarians she trains in her library system. Jenny highlights that “the SJSU faculty includes a number of rock stars from the library world and I am so grateful that I was able to take their classes!”

Jenny further cites the program’s affordability and the flexibility of the 100% online format as reasons for choosing the iSchool. Jenny laughs saying that she “wouldn’t recommend” her version of life-event scheduling to other iSchool students, but it was this flexibility that allowed Jenny to complete her MLIS while simultaneously buying a house, getting married and securing the library position of technology trainer with her current employer, the Finger Lakes Library System.

While her iSchool career certainly meant a busy two years for Jenny, her hard work paid off. She received her MLIS in the summer of 2016 and once she received her Librarian Certification from the state of New York, Jenny’s employer promptly offered her a job as the Finger Lakes Library System’s Continuing Education and Outreach Librarian, a position created just for her. In this current role, she is responsible for supporting the librarians at each of the system’s 33 member libraries by providing them with training and educational resources on a variety of topics including cataloging, grant writing and Jenny’s passion—adult programming.

Most recently, Jenny participated in the Association of Rural and Small Libraries’ 2019 Annual Conference. Her presentation on “Adult Programming: Beg, Borrow and Steal” provided a guide and resource list for librarians who are creating adult programs working with a small budget. Jenny’s goal with this presentation was based on her own experience in the adult programming trenches while working at a small library. She hopes that it will support her system’s librarians, as well as any other librarians who can find it useful, in creating engaging adult programs that can easily fit into a busy public librarian’s schedule and budget. Jenny’s persistence and dedication to providing support to her fellow librarians follow in the tradition of the iSchool faculty members who she so admires.