“It was an honor to be considered among the 12 nominees. It matters when your peers sit down to write a letter about you. I’m very humbled by it.”

Hadiya Evans can’t recall a time she didn’t feel a sense of belonging in libraries. “I’ve always worked in libraries – volunteering, shelving as a page – from the time I was in college,” she reflected. While volunteering as a student at the Metropolitan State University of Denver, a clerk suggested she apply for a paid position. She landed a part-time job, which accorded sufficient flexibility for Evans to continue her college coursework in African American studies and anthropology while also participating in two separate study abroad programs in Ghana and Kenya. “I was still shelving after grad school,” she recalls.

Between college and her first master’s degree, Evans encountered a community service opportunity with the Denver, Colorado, Library Friends Foundation. Until she became involved with the foundation, she acknowledges she had no idea about the multi-faceted behind-the-scenes development operations that support a library’s public face. Evans was fascinated and captivated by the significant role a library foundation plays in advocacy, fundraising, donor relations, planned giving, and grant writing to support programs and outreach.

“I worked [at the foundation] for four years, while earning a Master’s degree in School Libraries – Information Technology at University of Colorado, Denver.” It seemed clear to Evans where her future lay. “I went back to school to become a school librarian.” Beyond her commitment to library work, Evans had realized she “had a good rapport with children,” and delved into elementary school practicum. “Immediately, however, I discovered developing curriculum for younger kids was not where my talents lie. My passion was for teens.”

She finished the degree and returned to the library, this time as an employee responsible for adult and children’s programming. Evans’ mentors encouraged her to pursue a Master’s degree in Library and Information Science from an American Libraries Association-accredited school.

Her web search brought Evans to the San José State University School of Information. “I love the program at San Jose Staté,” she said. “There are so many options,” Evans points out. “Besides the regular library classes, there were options in web-based technology, archiving and museum materials preservation at San José State. I started in the spring semester 2015.”

Today, Evans feels fortunate to have found her niche, both at the School of Information and as program planner for the Blair-Caldwell African American Research Library, part of the Denver Public Library System. The library’s collection focuses on the American West and the African-American experience from Canada to Mexico, she notes. While responsibility for preserving, displaying and making available relevant materials is a significant aspect of the library’s work, Evans explains the library also reflects the interests, needs and hopes of its surrounding community.

“It started out as a neighborhood branch library, and has been completely repurposed to address the needs of the community, incorporating gallery, meeting room and archives spaces.” Evans emphasizes the Blair-Caldwell center is considered a trailblazer, nationally known, attracting people from all over the world to Denver’s historically African-American Five-Points neighborhood.” Largely segregated from greater Denver, over the last century the Five-Points area developed a rich history of its own. “The library tells the neighborhood’s story.” she says. 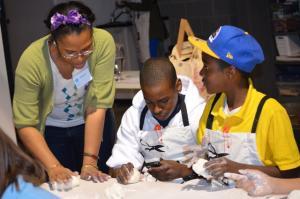 In her role as program planner, Evans is constantly mindful about “who the customers are. We have unique programming – beyond the public circulation library on the first floor. We partner with other libraries in the Denver Public Library System, too.” Evans has planned film and author series events, the Annual Toy and Book Giveaway, and a Poetry and Pancakes workshop. A highlight, she says, was helping develop a recent exhibit on the history of African Americans in comics. “It is important to be open to the community, to listen, collaborate and partner with our constituents” and reflect their interests, Evans says.

Evans delights in the diversity of her job responsibilities. Hadiya (featured above) plans programs and workshops for Denver’s Blair-Caldwell African American Research Library. She works with local artists and coordinates gallery shows, plans and implements outreach – including acting as library spokesperson at a wide range of Denver events, writes a monthly newsletter, manages the library’s website and social media presence, and handles PR and promotion. “There’s never a dull moment,” she quips. “And I’m uber organized.”

Employee of the Year

Evan’s dedication to her community – both inside and outside the library – has been noticed by Blair Caldwell patrons, and honored by her colleagues. At the library’s October 2016 Staff Day, Evans garnered three awards – “Teamiest Team,” “Flexible Flyer,” and the culminating “Employee of the Year.”

For the team honor, Evans was recognized for providing the training piece in a project in which the library worked with Harwood, a non-profit organization seeking to change how it engaged with the community. “I was nominated with three other ladies. The project and training award demonstrated the library’s desire to turn outward. Our team conducted community conversations. It was based on a lot of listening.” The Flexible Flyer “does it all!” Evans laughed. 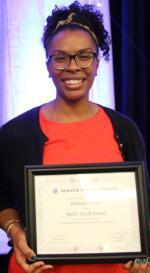 As for the peer-nominated Employee of the Year distinction, Evans (featured on the left with her award) says she never saw it coming. She voted for other colleagues, and was overwhelmed by their recognition for her contributions to the library. “Seven different people came together and each wrote a nominating letter,” she recalls. “It was an honor to be considered among the 12 nominees. It matters when your peers sit down to write a letter about you. I’m very humbled by it.”

Commendations of Evans were glowing. “Hadiya’s influential leadership and community outreach has opened up numerous doors in the Denver community with artists, lecturers, teachers, public figures, individuals, students, businesses, government and the private sector, to foster the engagement of the BCL with diverse communities,” wrote one colleague.  Another said, “Hadiya continues to go above and beyond providing support for a variety of programs throughout the system – Kwanzaa, RADA book club, adult programming at BCL, Juneteenth and Black Arts Festival Outreach – she has created processes that are streamlined and inclusive of staff.”

Taking a Leap, Landing with Panache

Since her “Teamiest Team” experience with Harwood, Evans says she’s discovered a new side of herself. “I’m a naturally introverted person. Now I’m trying to step outside my comfort zone – I realize [I] have to step out and be more visible, especially if I want to get a job as a librarian.”

She’s found just such an opportunity providing technology support for Professor Debbie Faires’s INFO 203 course, the iSchool’s introduction to online learning, required of every incoming MLIS student. Blackboard Collaborate is the iSchool’s interactive virtual sharing platform, used by the majority of courses in the school’s all online curriculum. “It’s enabled me to take ownership, become empowered. I help people new to the program; I’m responsible for [students’ success during] the entire hour” of the Collaborate discussion. “It was terrifying at first. But it’s really brought out those qualities I’ve been trying to develop in myself.”

Evans says her experience in the iSchool has opened a world of career possibilities, from professor of information and library science to library leader. “It has given me cause to consider what else I could do as a librarian. I’d never thought about teaching adults,” she reflects. “I can see myself in an academic setting – I’m especially drawn to teaching in community college. Hands-on interaction with adult students really speaks to me.” At the same time, Evans acknowledges, “I would gladly stay in the public library system. Working with immigrants has great appeal, too.”

No matter which way she turns, Evans’ concedes her future remains rooted in her first career – library and information science. “It’s really the only job I’ve ever done,” she concludes.