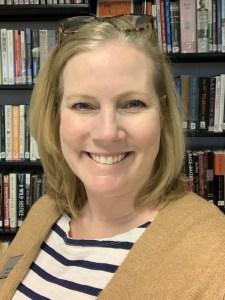 “I thought I had to work in a library in order to honor my MLIS degree. Now, I am working for libraries, which is even better!”

How does an aspiring photojournalist end up as a leader in the emerging profession of media literacy education? Let’s ask MLIS iSchool graduate Donnell Probst, the new Associate Director for the National Association for Media Literacy Education.

Donnell began her undergraduate career with the idea of studying photojournalism in order to combine her love of photography with her interest in research and social issues. Marriage and parenthood had her putting her studies on pause, however, and when it came time to return to school to complete her degree, Donnell had a different focus.

Based on her experiences raising her daughter, who has been diagnosed with autism, Donnell became a special education advocate. She finished her undergraduate career with a degree in media studies after her advocacy work made her aware of the power that media had in shaping narratives regarding people with disabilities.

She chose the San José State University iSchool MLIS program because she believes in the efficacy of online programs. “I got my undergraduate degree online, and I always tell people that online classes are so much more demanding than in-person classes. You can’t hide in the back of the classroom in online school!”

Donnell’s choice of the iSchool was immediately reinforced as she found herself “completely prepared for my first library job after coming out of the iSchool program. The amount of accountability and the quality of work that goes into this program gave me a better education than other job candidates who had attended the nearby in-residence library science program.”

Donnell’s media literacy focus led her to serve on the board of Gateway Media Literacy Partners as well as to conduct contract work with the National Association of Media Literacy Education (NAMLE). NAMLE’s vision to see media literacy be highly valued by all and widely practiced as an essential life skill for the 21st century fits perfectly with Donnell’s dedication to increasing media literacy through her work.

Despite this fit, she still felt conflicted when her connection with the group led to the full-time job offer as NAMLE’s associate director. According to Donnell, “I thought that I had to work in a library in order to honor my MLIS degree,” so she initially hesitated to give up her newly acquired job as a part-time reference librarian at Jefferson College. After examining her career goals, however, Donnell realized that “working for all libraries was even better than working in one library” and she joined NAMLE as their associate director in April 2019.

Since becoming the associate director, Donnell has continued with her work on National Media Literacy Week and as the program co-chair for the group’s annual national conference. This year’s conference, A Path Forward: Elevating Conversation, Unifying Voices, was held in Washington, D.C. It was billed as an opportunity to bridge voices, platforms and possibilities for moving the conversation of media literacy education forward. The conference hosted over 300 attendees and nearly 50 organizational partners.

In her new position, Donnell is excited about the intersection of information and media literacy and sees the growing number of librarians involved in the study of media literacy education as essential “boots on the ground” players in her work. She has found that her MLIS degree and library work experience have helped her in developing valuable partnerships in the library field.

In her interactions with the American Library Association, for example, Donnell could “see them sitting up and taking notice when they discovered that someone at NAMLE ‘could speak library’ to them!” To Donnell, “media literacy is just like regular literacy. Being media illiterate has the same damaging effects that general reading illiteracy has.”

Through her work with NAMLE and in her partnerships with her fellow library professionals, Donnell is already shaping a new approach to media literacy education, and we look forward to following—and supporting—her continuing work to foster media literacy skills among all of us.