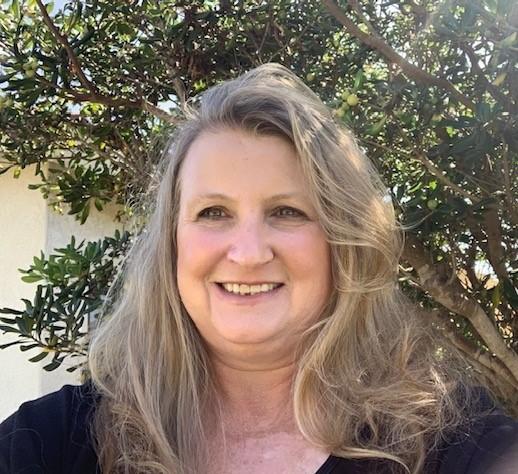 “Volunteering counts, too! You don’t need to rely only on internships to gain library work experience.”

Jerry Limberg is a long way from her childhood home of Conway, Arkansas, but after committing the time, education and passion toward her career path, she found her true home in librarianship.

Jerry describes herself as someone who is “always willing to pick up and go” to new places. Originally leaving her childhood home to obtain an undergraduate degree in American Studies at Utah State University, she then moved to Sacramento to pursue her interest in state politics. Jerry laughs as she recalls how she packed up her car with only a dream and no job, but her daring move turned out to be the right one. While California does not have a Governor Limberg (not yet, anyway!), Jerry found her place in the Golden State when she met her Bay Area native husband and moved with him to the San Diego area. The pair decided to pursue careers in the legal field and supported each other through their respective programs at the University of San Diego—her husband pursued law school while she pursued the paralegal program. Jerry’s traveling days appeared to be over when she earned her paralegal certificate in General Litigation and settled into a career working for a private law firm. After 10 years, however, Jerry again got bitten by the travel bug and she found herself ready to explore new career territory.

Jerry knew that she wanted to find work that combined her love for research with her academic background in American Studies. This search led her to a master’s degree program at the California State University-San Marcos. In 2012 she supplemented her newly-obtained master’s degree with a certificate from the San Diego/Imperial County Community College Association that allowed her to begin teaching history at Palomar Community College. From this experience, Jerry discovered that she “loved providing instruction, teaching and watching students learn,” but she did not love the lecturing aspect of her job. It was then that Jerry remembered that one of her fellow graduate school colleagues had also been earning a MLIS at San José State University. This gave Jerry the inspiration to set librarianship as the next stop on her career journey.

With all roads leading to SJSU and librarianship, Jerry enrolled at the iSchool in 2015. In order to “get a sense of where I enjoyed being the most” in the library field, Jerry seized the opportunity to volunteer at the San Diego Public Law Library. “I can’t express how valuable this experience was for me,” Jerry says. This volunteer experience involved serving a diverse community while also learning basic library functions while working at the reference desk. Jerry went on to gain further library experience by completing two internships—one in research services at San Diego State University and one in the Digital Library Development program at the University of California, San Diego.

Jerry’s internships helped guide her curriculum choices as she supplemented her work experience with classes in Legal Resources (INFO 220) and Archival Photography (INFO 284). Jerry did not limit herself to classes that reflected her interests. She purposely enrolled in INFO 246 Information Tools and Technology Advanced XML because, even though it “scared her to death,” she knew that it would provide her with computer language skills to help her in future work. She ended up loving the coursework, and counts her professor, Raymond Dean, as one of her favorite instructors during her time at the iSchool. Jerry’s recommendation to current iSchool students is to “take classes outside of your comfort zone!”

As graduation neared and it came time to expand her library job search, Jerry’s vast amount of work experience was, of course, an asset. However, Jerry still found herself struggling to put together a resume that would effectively convey her professional story to employers. As Jerry relates, “I was a transitional student struggling with marrying my old skills with my new skills.” Fortunately, she sought help from the iSchool Career Center. With career counselor Jill Klee’s guidance, she was able to bring her “1993 resumé into the present day.” This provided a great success as she promptly netted a position filling in for the Reference and Research Librarian at the USD Legal Research Center.

Jerry’s career travels have brought her to the realization that in order to get where you want to go, you “must use the skills that you have.” She would advise iSchool students to develop their skills through all possible avenues whether they be temporary positions, volunteer work or internships. In Jerry’s experience, “hiring teams are looking for work skills, and volunteer positions, like internships, count as work!” Jerry’s career journey, guided by her own volunteer and internship experience, certainly proves her point. She has arrived at her career destination in the library field doing what she loves—teaching and researching for the students and faculty whom she serves.