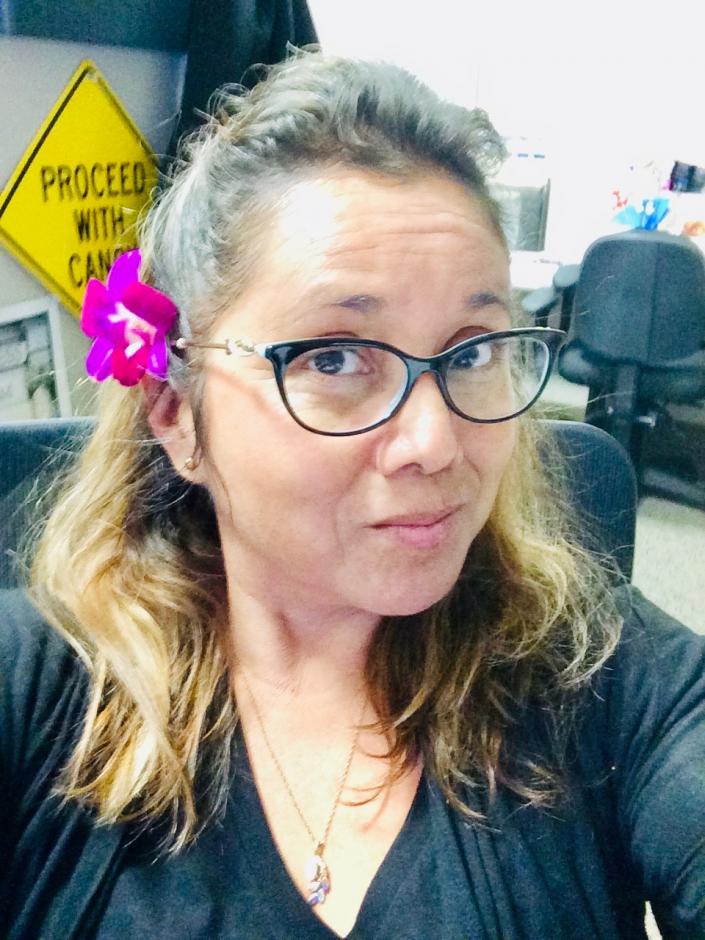 “The fact that I can stay ahead of the undergraduate students who walk through my library’s doors says so much about the quality of what the iSchool is teaching us.”

Native Southern Californian Rosa Conrad may have come to the world of undergraduate and graduate studies a bit later in life, but now that she has arrived, she has no plans to stop learning, and her accomplishments—both in school and in her library career—just keep piling up.

Rosa embarked on her college career in 2008 determined to continue her education despite being a busy mother of two. She began her studies at MiraCosta Community College, eventually obtaining her B.A. (2013) in Social Sciences (with an emphasis on Sociology, History and Political Science) at California State University, San Marcos. She started her graduate work right away and earned a Master’s degree in Sociological Practice from the same university in 2015. During this time, Rosa got her first taste of library work when she held a job as a professor’s assistant in the school’s library while completing her graduate studies.

Rosa’s interest in the study of communities pointed her straight to a career in sociology. In order to pursue her intended focus on community outreach, Rosa joined the Parks and Recreation Department with the city of Oceanside. Working for the city enabled her to also see job listings for other departments and while looking for an additional part-time job, she saw a job posting for the Oceanside Public Library. She knew her former library experience would make her a good fit for the position, and she was soon hired on staff at the library where her duties included driving the library’s bookmobile.

Rosa’s library work led her to the realization that the library field offered many opportunities to use her community outreach skills. She was happy to shift her career path to librarianship without having to give up her focus on community outreach, and she spent the next three years at the Oceanside Public Library before returning to the world of academic librarianship by taking a full-time position back at CSU San Marcos as a library services specialist.

In order to move her library career forward, Rosa next decided to pursue a graduate degree in the field of library science. For Rosa, the San José State University iSchool was the best choice for a number of reasons. One, she had heard wonderful things about the iSchool MLIS program from her library colleagues who had attended, and two, the iSchool’s completely online format worked for her as she was firmly rooted in the Southern California area. Finally, being able to attend school part time allowed her to carve out time for herself and her family. For more on how Rosa accomplishes this balance between work, family and school, please check out a “Day In [Her] Life” here.

Rosa credits the iSchool and its focus on emerging technologies with the reason that she is able to help her students today. As she says, “The fact that I can stay ahead of the undergraduate students who walk through my library’s doors says so much about the quality of what the iSchool is teaching us.”

In addition to her studies, Rosa recently participated in the 2019 iSchool Student Poster Session at the ALA Annual Conference in Washington, D.C. She recommends the experience to her fellow students because it is a great way to practice presenting research in public.

Rosa also enjoys connecting with other people in the library field and thinks that attending a variety of conferences is a helpful way to do that. In particular, she recommends that students consider attending Seguimos Creando Enlaces, a free conference that brings together librarians from the US and Mexico to further their professional knowledge and exchange ideas. As she says, “You don’t know what’s out there until you talk to other librarians.”

Rosa’s role as a part-time iSchool student also allows her to devote the time and attention to her work career that her love of community outreach and dedication to her students demand. In her work as CSU San Marcos’ library services specialist, Rosa has been able to channel her interactive displays into a thriving form of outreach—both for the campus and for the wider community.

She uses her monthly library displays to engage students through participatory practices (the displays are often equipped with forms for students to fill in answers on the display’s topical questions). Rosa also encourages her students to think of the library as more than just a source of academic information by highlighting collections that speak to students’ interests outside of their studies. She uses these same displays to partner with other campus and community groups so that students can be exposed to what is going on in the community around them.

An example of how Rosa was able to engage students, other campus groups and the broader community with the interactive library displays she designs come from her Día de los Muertos display. Rosa worked with both on- and off-campus groups such as the CSU San Marcos Latino of Faculty and Staff’s LowRider Experience Event, the Latin@ Center, the University Police Department and the local car enthusiast group Slow Lane Familias Inland Empire Car Club to create a community event that showcased the library and its collection on low-rider material, as well as the school’s support of Latino culture in conjunction with her holiday-themed display. The event ended up bringing more than 400 students and outside community members into the library as a result.

Ultimately, Rosa is looking to “make a difference and contribute to making a library welcoming and engaging” to both students and community members alike. Rosa’s community-outreach orientation and desire to get people engaged and involved are reflected in her words of encouragement to students contemplating a return to school. According to Rosa, “It is never too late to go back.” All of us, she says, regardless of age, “are just walking through that same door.”