A Mother and Daughter’s MLIS Journey 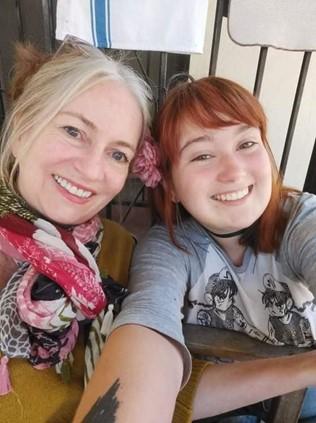 “You start with a love of books and go down to questions of who is the keeper of the information, and how do we keep it safe, and how do we organize it in such a way that future generations can find it, and all that stuff… It’s very cool.”

Though worlds apart, LA-based Julie Tilsner and Brighton, UK-based Annie Howitt are both Master of Library and Information Science students at the SJSU School of Information, each working to better their understanding of information science and adding to their career portfolio. They exemplify a cohort empowered by the program’s online and largely asynchronous delivery method, and yet what connects these two women and makes their story unique is that they are mother and daughter.

All In The Family

Julie is an editor and writer at the USC Marshall School of Business. Prior to working in higher education she wrote and edited for newspapers, magazines and online platforms for more than 30 years. While she’s always held a special interest in libraries, her editorial career took center stage.

“Library science was always Plan B, but I never had the opportunity to explore it until now,” she said. “I heard about the strength of SJSU’s MLIS program back in 2006 from our local librarian, and I should have acted upon it then when the kids were small.” Fast forward 15 years and her daughter Annie was graduating from USC with a degree in East Asian Languages and Culture (emphasis in Japanese). “She was adamant she didn’t want to work for a corporation such as Honda or Netflix,” said Julie. “So I introduced her to career options with an MLIS. She’s a voracious reader, committed to working with her community, adept technically like most of her generation…and she’d already worked in a library setting as a student worker and loved it.”

Like many people over the last few years, Annie’s post-graduation trajectory was interrupted due to the COVID-19 pandemic. Annie had planned to return to Japan through the JET program to teach English for a few years. But Japan closed its borders and she had to reconsider her options.

Luckily, Julie’s suggestion toward librarianship led them to attend the iSchool’s MLIS Open House together, and Annie made her decision to apply, and enroll. The flexibility of the program enabled her to take classes from anywhere she found herself.

One year later, Annie’s choice inspired her mother, and Julie, although working full-time, decided to apply herself. She began as an MLIS student this spring.

“It’s a fascinating profession for a number of reasons,” Julie says. “You start with a love of books and go down to questions of who is the keeper of the information, and how do we keep it safe, and how do we organize it in such a way that future generations can find it, and all that stuff… It’s very cool.”

As a dual citizen through her father, Annie is able to live and work in the United Kingdom — and attends the iSchool from abroad.

Throughout her MLIS program, Annie says that she is hoping to learn more about how information works: “how it’s stored, how different people process it differently, etc. I want to understand information ecosystems, and how they can be made accessible for everyone that wants to access it. My overall goal is one that fits in with the ALA’s Bill of Rights — to ensure that libraries provide information and enlightenment to the people that need it most.”

Even before she knew she would pursue an MLIS, Annie found herself working in libraries and museums, including 18 months in USC’s library system as a student worker.  “I later also worked briefly at the USC Pacific Asia Museum in Fall 2020 as an assistant, and I found it to be fascinating! I could certainly see myself working in an archive or a museum, especially one where I could utilize my knowledge of Japanese language.”

And her special interest? Folklore. Like her mother, Annie has a deep love of stories and has studied their significance for cultures worldwide. Ensuring those stories are preserved and handed down is an important role, and something she is particularly interested in, in part thanks to a USC folklore professor and mentor who studied at Trinity College in Dublin, and who told her about the massive Irish folklore collection there.

That’s a dream job for Annie, who would love to find a similar position, though perhaps somewhere in Japan or back in the United States, to preserve cultural stories for future generations.

“You know,” Julie interjects. “There’s a Library of Congress website for folklore collection and archiving, and they’ve got all kinds of internships and opportunities. You should check it out.”

Not too surprisingly, Julie and Annie share many interests.

“Libraries (and okay, bookstores too) were my favorite places as a child,” Julie says. “I still get goosebumps walking into the LA City Library downtown. I’ll be honest, the moment I started reading Susan Orleans’, The Library Book, I realized I had missed my calling.”

Julie feels she became a story-teller because she read so much growing up writing came easily to her, and as the academic and professional accolades kept opening doors, she simply went where opportunity took her. She earned a master’s degree in journalism from Columbia University back in 1992.

“I don’t know that I’ll stop writing…and I don’t know exactly what I’ll do with my MLIS at this point in my career. But the skills it teaches dovetails nicely with a lot of things I do in my current role: I need to be able to uncover information, for example. Understanding information-seeking behavior is very helpful in a marketing role. And there’s also a digital asset management (DAM) element to my job that I quite enjoy and would like to learn more about.”

Regardless of where she takes her librarianship career in the future, she is enjoying the ride.” I can live vicariously through Annie as she pursues her career,” she said. “And I’ll have insights into what she’s up to because I will have studied it as well.”

Though they live approximately 5,000 miles from one another at the moment, Julie and Annie are close. Annie grew up surrounded by her parents’ books, their graphic novels, their comics. She wrote her share of fan fiction online as a teenager. Mother and daughter share a love of a well-turned phrase, fantasy novels, and bookstore cats.  Their similarities make the prospect of being in grad school together that much more delightful.

“It’s been really cool!” Annie says. “I’ve been telling all of my friends about how awesome it is to be in the same school program as my mom. We haven’t taken any classes together yet, but I think it would be super funny if we did.”

As the daughter, Annie naturally expresses a little more bemusement about the idea of ending up in a class together where they might have to work together or comment on each other’s discussion posts. “I’m not going to be like, ‘Hi, that’s Annie, my daughter,’ Julie says, before amending, “although… maybe I would be, I can’t help myself.” \

Looking Toward The Future

Knowing that she is pursuing the degree out of personal interest instead of as a definite career choice, Julie has a different perspective on her MLIS degree than the average student. “I can report there is something invigorating about dipping your toes back into graduate school, regardless of career outcome. I’ve met some really interesting people and may even meet up with some of those in my area,” Julie says.

And for other hopeful nontraditional students, she adds, “I am being exposed to new ideas and skills that keep my mind sharp. Those are just three of the many worthwhile elements of starting grad school at a late date. I recommend it.”

For Annie, her goal is to finish the MLIS program and then see what’s next. “I can see myself moving back to America if only to promote information literacy, because I know that’s a huge issue. We’re so swamped with misinformation, we can’t tell what information is reliable and unbiased, and that’s something I’d really like to advocate for.” And as for her dream of archiving folklore, Annie thinks the Southern U.S. holds untapped potential for collecting stories, especially in the Appalachians.

When asked about her advice for future students, Annie expressed how she did not feel like she knew her own path until she arrived at the iSchool, and warns against pigeon-holing yourself in one path.

“I think that’s what’s good about this program. There’s a lot of options —  and I think people should definitely explore all of the options they have and see what works for them. There are many ways you can use this [degree], and not everyone wants to be a public librarian. So I’d recommend spreading out, seeing what’s out there.”

Neither Julie nor Annie know for sure where their MLIS program will lead them, but they’re happy to be moving forward together.