Public Libraries and the Community

2010 San José State University School of Information alumnus Chris Brown went through the MLIS program with the understanding that his educational experience would be the foundation that would enable him to practice LIS work—but that the real learning process would take place by just jumping into the workplace and being a librarian. “I found that if I learned something in class but wasn’t actually practicing it, I’d lose the skill, or forget my learning altogether,” Brown says. The culmination of the degree program and his work experience is War Ink.

War Ink debuted on Veteran’s Day 2014 to public acclaim and praise. It is a virtual art exhibit that tells the story of a specific part of the community, war veterans, through their tattoos. It is an example of masterful storytelling, stunning visuals, and volunteer effort lovingly created to give back to the community.

The Public Library Promise
Brown, showing his skills as a reference librarian in the Contra Costa Public Library system, strived to get to know his library patron population, to understand the community’s challenges and needs, and try to find out what the library could do for them. “How,” he asked himself, “do you develop programs that aren’t just a diversion for the community, but something they can actually participate in and learn from?” He learned that Contra Costa County has a 10% veteran population, and observed that the media stories on veterans focused on the difficult process of returning to home, acclimating back into a community that is disconnected from the war. And that the local veterans often don’t know about the support offered to help ease that transition.

“We’re a public agency,” Brown notes of the California public library system. “Other public agencies can take care of operational needs of a community—where to get medical assistance, therapy, medication. But in terms of agencies addressing social needs, community narratives, shared experiences—who’s out there looking at delivering services that impact the public good?”

The Journey to War Ink
As a librarian, Brown knew he had to address information needs first and foremost, so he started by bringing in benefits specialists and job placement agencies. It was only through working with the community so closely, Brown stresses, through informal dinners with vets, being friends with this group, he was able to get to the heart of their experiences and needs. But he wanted to do more.

An exhibit showcasing Vietnam-era Zippo lighters helped Brown put the pieces together: He was taken by its dark humor and candid depiction of the wartime environment. What could he do that was so candid? Tattoos, veterans, stories. The lightbulb went off.

Libraries capture the stories of a society. War Ink is a partnership with the Contra Costa County Libraries. Working through the library, Brown got to know Jason Deitch, an Afghanistan/Iraq Army Special Forces medic, who became his co-partner on the project. Deitch had tattoos of his own, and helped Brown understand that the wartime inspired tattoo designs weren’t just common tropes. Wartime tattoos are very personal, containing unit symbols and narratives of individual experiences and stories. But you’d never see the tattoos if you weren’t connected to the community on a personal basis, to see them when the suits and ties came off. So Brown and Deitch traveled the state, one veteran’s center and tattoo shop at a time, to recruit veterans to interview for the project. 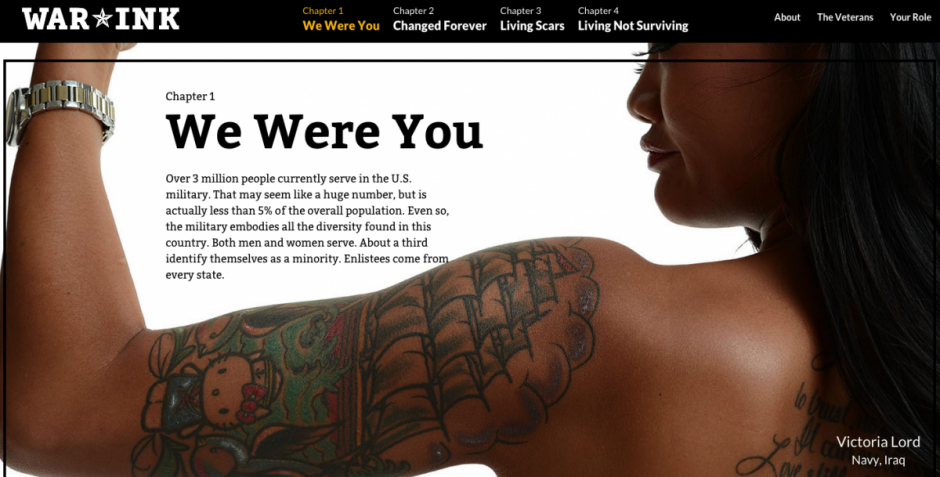 To Get a Grant
The project took eleven months from conception to completion. To get there, Brown wrote and won a series of grants, and was able to secure professionals to record the project.

“I took a Patty Wong grant-writing seminar [INFO 282]” Brown says, “and then got a lot of experience through working with the country librarian, who was good about letting junior staff write grants just to get the experience.”

Brown wrote around five grants through the county, and then, as a 2011 Eureka Fellow, gained even more experience by writing an LSTA grant, awarded to California libraries to promote “improvements in services to all types of libraries.” The LSTA grant process got Brown to focus on project purpose and benefits to the community. Will it change people? “That was instrumental in helping me get here with War Ink. My grant writing skills literally developed through trial and error.”

As project director, grant writer and co-curator, Brown worked till 4 am in the last weeks of the project, sleeping on Deitch’s couch at night. All while maintaining his regular full-time job managing two public libraries, graduating with his MLIS and returning to school for an MBA in public administration. “It was insanity!” Brown is able to admit with a laugh, now that it’s all over. But it was worth it.

War Ink In Action
Larry Millam, a veteran from the Army National Guard, recorded his War Ink interview while his wife listened. As he was talking, Brown watched Millam’s wife relive each wartime experience through her husband’s stories. “It was exactly the experience that I was hoping the War Ink audience would have,” Brown marvels, “and watching it firsthand was incredible. Now she understands more about her husband, and she got there through War Ink.”

“War Ink wasn’t to make money,“ Brown says. “It was just to make sure an issue was raised, and that we were talking about it.” And that’s what it did.