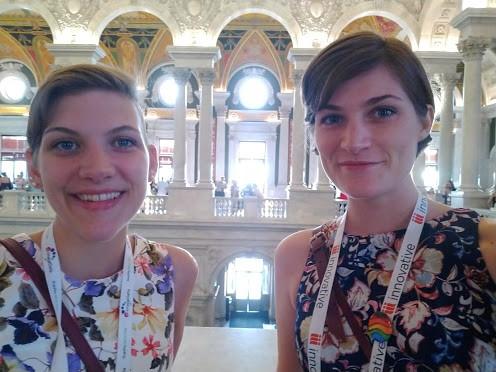 “We feel lucky to be a part of the library world. Librarians are such a loving group of people, and our iSchool experience has been great so far!”

Sisters Kelsey and Korey Flynn may have the same love for librarianship, but they are enthusiastically embracing very different paths within the career field they share.

Kelsey and Korey grew up in the Chicago suburb of Orland Park and attended Montana State University. Kelsey embarked on the field of library work first by getting a job at the school’s library and managed to convince a somewhat reluctant Korey to follow suit two years later. Korey was soon won over by the work, however, and remembers after her first few weeks at the library saying to herself, “Oh. Wait. I LOVE this!”

At the same time that Korey was discovering her love of library work, Kelsey was back at home finding her own career path. Tired of working at jobs where she felt “out of place reading in the lunchroom,” Kelsey came to the same realization that Korey had, and decided that taking a part-time library job and loving it was better than working a full-time job anyplace else. Starting in the circulation department in her hometown library of Orland Park, Kelsey eventually expanded her library work to include two more libraries—the Joliet Public Library and her current employer, the Lockport branch of the White Oak Library District.

Kelsey currently serves in the position of adult services specialist for Lockport, but her innovative approach to library programming has afforded her an additional title, as well. In a plan to get free prizes for one of her programs, Kelsey hit on a program idea—“Save Libby from illiteracy!” and asked library vendor and Libby app creator OverDrive to donate prizes for the program. Not only did the vendor happily comply, but they also feature Kelsey and her program in their presentations. Kelsey now has librarians at conferences coming up to her saying, “You’re the Libby Girl!”

Korey also continued her career journey into librarianship after her graduation from Montana State. She took a job in adult services at the Summit Library back in Illinois and soon discovered that working for a small library with a staff of just 14 allowed her the flexibility to expand her duties to other areas. Since the library had no existing teen program, Korey identified the need for a teen services department and with help from fellow staffers built Summit’s teen program from the ground up.

In the process, Korey found her ultimate library calling and has since directed her career path toward teen librarianship. She is currently working as an adult and teen services specialist for the larger Woodridge Library where she has worked on teen programs such as After Hours at the Library and craft-and-movie-nights to celebrate the annual summertime Shark Week. “Teens are a hard population to reach,”says Korey, “but when you are able to create a library program that gets them excited about and engaged in the library, then you really know you’ve won!”

Despite working at different library locations and in different capacities, both sisters arrived at the same conclusion after just a short time in the public library sector—to continue to grow in their chosen career field they would need to get a master’s degree in library science.

While their home state of Illinois boasts two ALA-accredited MLIS programs, after extensive research, the two found that the San José State University iSchool was their best choice because of its asynchronous online program format, high-quality program offerings and the impressive backgrounds of the iSchool faculty itself.

Currently, Kelsey and Korey are one calendar year into the MLIS program and according to Kelsey, “are finding it to be a great experience so far.” Because each sister is holding down jobs at two different libraries, time management is of utmost importance. They both are figuring out a balance between work and school by taking two classes per semester in the hopes of finishing their degrees sometime later next year. As far as advice to prospective and current iSchool students, both Flynns advocate daily monitoring of classes in Canvas in order to manage the different due dates that come from taking multiple classes in a semester.

Come graduation time, expect to find both Kelsey and Korey continuing to work in the library field. Korey is looking forward to a public library future working in teen services and Kelsey, while enjoying her own public library position, is not ruling out returning to the world of academic libraries. Wherever they end up, the Flynns both express a deep appreciation for the profession. Kelsey is grateful for the welcoming attitude and generous information-sharing tendencies that she has found in her colleagues, and, as Korey observes, “librarians are a loving group of people” and she is happy to be working among them.