Alumna Ginny Mies’ skills are a perfect fit for work at TechSoup, which matches libraries with technology.

Ginny Mies made a fortunate mistake when enrolling for her first semester of courses at the San José State University School of Information. Dedicated to the Academic Librarianship career pathway after working in the University of California, Santa Cruz, McHenry Library as an undergraduate, Mies accidentally signed up for an iSchool course reviewing learning modules and online tools for children. “But I found it interesting and fun, and learned a lot from the teacher-librarians,” she says, five years later. “It was a good challenge!” The technology-embracing course inspired Mies to be forward thinking and apply new skills to her job. Best mistake ever.

The course was just the tip of the iceberg of what the iSchool taught Mies, who now uses her MLIS knowledge as senior content developer for the San Francisco–based nonprofit TechSoup, which connects nonprofits, foundations and public libraries with technology products and services.

The Road to TechSoup
Mies pursued a career in journalism prior to starting the MLIS program, and worked at PCWorld magazine covering technology products and updates. “I liked it but was still unfulfilled,” she says. “So I revisited my dream to do academic library work, and I found out about the iSchool.”

Mies was able to merge work she was doing at PCWorld with her iSchool courses: It was a time when mobile applications for libraries were making headlines, so Mies learned about the apps through the iSchool and wrote corresponding reviews for PCWorld on library and reference-related apps. “I was looking in the same areas for research,” Mies says. “It was a lot of fun, and I was able to do a lot of cool projects in the iSchool that also provided me with writing for the job.”

But TechSoup was an organization she’d long been interested in, and when Mies found out the nonprofit had an entire department devoted to working with libraries, she began keeping her eye out for jobs that matched her experience and interests. When one opened up, Mies applied—and wowed the hiring managers with her writing skills and knowledge of how libraries work.

Match Made in the Cloud
“The title of the job was content curator,” Mies says. “They wanted someone who could do research and write about technology, and particularly to write for the library audience.” The curator’s main job is to put together fact sheets and guides for all of the resources across TechSoup’s global network. “It was a nice combination of the two things I’d been doing my whole career,” Mies adds.

Now Mies writes articles for TechSoup’s monthly library newsletter, profiles of public libraries doing new things with technology, and the TechSoup for Libraries blog, “a wealth of free resources that were created specifically with libraries in mind.” TechSoup also has a strong webinar program, and wanted someone who had experience producing live courses and webinars. “Some of my iSchool work with online courses and virtual learning really appealed to them,” Mies says. She now attends library-related conferences to stay up on new technology and innovation, and produces webinars on relevant technology products. A recent webinar explained the importance of Pinterest for libraries.

The Tech Future for Public Libraries…
Mies has found that the main issue for most libraries, particularly in rural areas, is getting funding for technology. “A lot of what I do is outreach and marketing,” she says. “The people who need us the most are small and rural libraries, and that’s opened up a whole new world for me. I had no idea how much these libraries struggle to get funding, so being able to get technology for them is a huge win for us.”

While a global operation, Mies’ work at TechSoup focuses on organizations in the United States, working with libraries listed in the Institute of Museum and Library Services (IMLS) database. TechSoup has a few Canadian partners, and is concentrating on reaching out to other types of libraries, like tribal and special libraries.

To start the donation process, librarians go online to check their eligibility, then register for TechSoup, providing information on their library, its 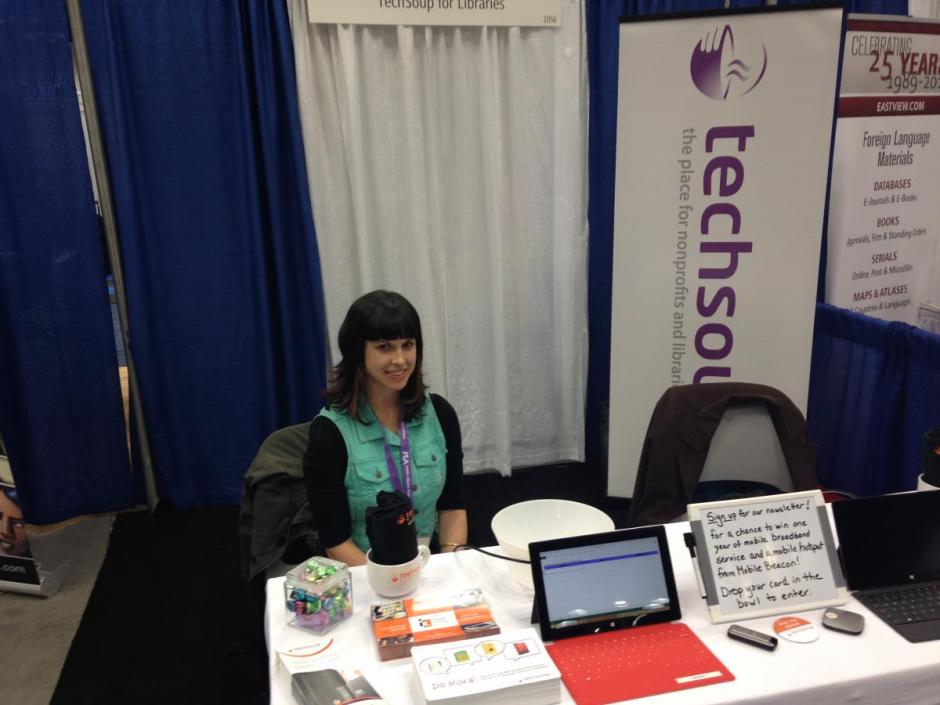 technology needs, and their wishlist. Mies also does outreach through events: she’s pictured, right, at the 2014 Public Library Association conference, where TechSoup set up a booth to help libraries find out what tech donations they were eligible for. That can be anything from word processing and online learning software at discounted rates, to refurbished monitors, servers, iPads, tablets, laptops, and desktops.

“I love doing the research and finding librarians who have done a really amazing project at their library that’s either broadened the library’s access or gotten them media attention. I love finding them, giving them the platform to tell their story, supplementing libraries with all of the resources we can, and allowing other libraries to find their story and get help for themselves.”

…And How the iSchool Prepares You
“TechSoup exposed me to the world of public libraries,” Mies notes. “And I was on such an academic track!”

While at the iSchool, Mies took an online searching course that she’s found particularly relevant to her current role, and she was surprised to realize that her information resources and services class, where she worked on a project evaluating government agencies’ social media presence, transferred quite well to duties at TechSoup. “I do that same evaluation a lot with nonprofits,” she explains. “You’re trying to pass on information that’s important to a specific community, through social media, so I research the best practices for doing that.”

“I really do feel like the iSchool program is so beneficial for helping you prepare for the real world and jobs,” Mies adds. “Embracing new technology, getting you to use it in new and creative ways, and in the context of the library world. More and more libraries are moving toward technology-related programs, and that’s something iSchool does well.”