In Times of Crisis, Student Naomi Fuhrman Deploys with the Standby Task Force

“There’s no better moment to look at all of humanity than a conflict, [which] brings out the best and worst in people. When it comes down to it, the idea that I’d get to work with people doing the best of things was a pretty nice idea.”

Through the course, and a follow-up independent study semester with Hagar, Fuhrman learned of the Standby Task Force (SBTF), an online group that “provides humanitarian organizations with real-time crisis mapping and situational awareness support.”

For SBTF, crisis mapping is a crowdsourced project. SBTF volunteers collect raw data from online sources like Twitter, news reports and humanitarian aide websites; analyze the information and check it for accuracy; and then upload it to spreadsheets that are often turned into maps.

The resulting “crisis map” gives the activating agencies the information that they need to maximize the positive impact of their disaster response. It enables them to see the big picture of what’s going on in the crisis area: where help is needed, and who is already on the ground. So recently, when Nepal was hit by its worst earthquake in 80 years, it was the call to action for Fuhrman. 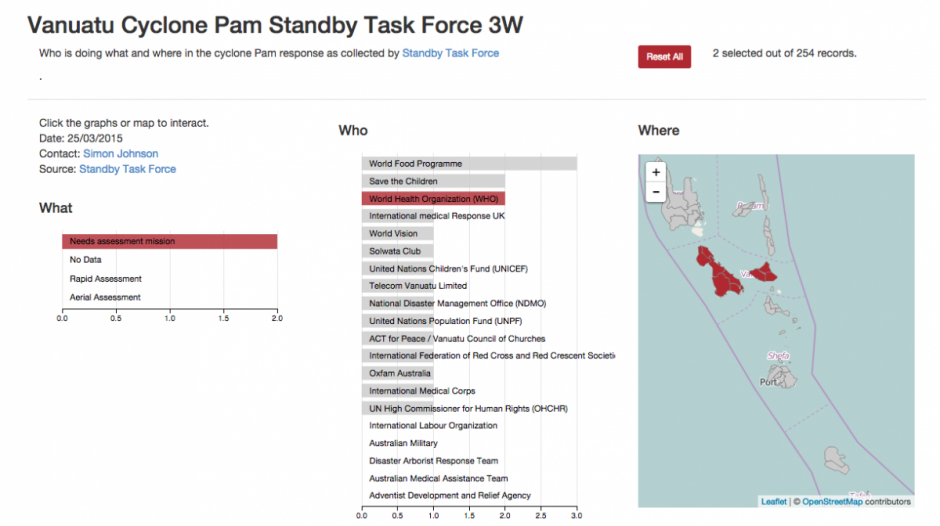 Virtual Deployment with the SBTF
“SBTF is not an organization that self-deploys,” Fuhrman explains. “It is a collection of volunteers from around the world who participate in online digital responses to humanitarian crisis. They’re activated by responding organizations like NetHope and the Red Cross, and each deployment is different based on the needs of the organization and the circumstances of the crisis. It’s an information link between victims and rescue and response agencies.”

For Nepal, one of the largest deployments in SBTF’s history, Fuhrman worked to provide data to 3W Reports: humanitarian response coordination tools, she explains, that volunteers populate by gathering data on Who is doing What, Where? “It was a matter of just searching, employing all those skills we’ve learned [as iSchool students] about finding information, verifying information, and transforming it into a usable, accessible format.” (See the image above for an example of a completed 3W map.)

“When it comes down to it, SBTF is a lot of volunteers doing lot of things that we, in an information society, have experience with,” Fuhrman says. “It doesn’t take a library degree to do internet searching, crisis mapping, geolocating. But it’s a good set of skills, because learning how to judge information, to search effectively and efficiently, to evaluate whether or not the information is valuable in a given circumstance, we do have additional training for, which is nice.”

Data Gathering and Life Saving
Fuhrman admits there were times when studying all the data, looking at pictures of the earthquake’s devastation, monitoring events as the death toll climbed: sometimes it was overwhelming. “It’s a testament to the organization that they put as much emphasis as they do on the healthiness of their volunteers,” she says, adding that there’s always someone to talk to who deals with trauma. “Everyone involved pushes each other to take breaks—live your life, take a shower, EAT! It’s really easy to get caught up in what you are doing and then not take care of yourself.”

But she also remembers key moments, breakthroughs that made all of the hard work and emotional toll worth her time and effort. “There was a bunch of about 40 kids trapped in an orphanage in who knows where,” she recalls. “They were found because a Tweet came through. There was enough information for an SBTF team to geolocate where they were, send out [the information and request for help] to the appropriate parties, and get them rescued. It’s an example of what kinds of good things happened because of this work.”

The Library’s Role in Crisis Management
Fuhrman is passionate about the role libraries can play in helping communities in times of disaster. That can start with just looking at resources libraries have on hand, to determine if they’re valuable. “Libraries frequently have maps,” she says. “Response organizations come in and need to reach people in distress. What if the roads are out, GPS [global positioning system] is out, but the library has a map with all of the little roads, including the fire roads? That might be just the tool that helps a stranded community receive urgently needed aid.”

“We as a field have a role to play in communities, in society, and that’s providing an opportunity for people to think, and feel, to put resources in their hands, to give them opportunities to expand how they see the world [and] the information they have access to.”

Hagar, Fuhrman’s Information Crisis/Disaster Health Informatics instructor, adds: “In their evolving and multiple roles, public libraries can play a critical part in building the resilience that can help the whole community recover from disasters more rapidly. As disasters are often local events, local organizations such as public libraries are critical in responding to them.”

As an example, after Hurricane Katrina, libraries in the Gulf Coast started building pop-up libraries in shelters for storm victims. “It’s really not a necessity,” Fuhrman admits, “but it makes a huge difference in terms of long-term recovery and short-term maintenance of a community. And who else is going to do that? It’s a job that rightfully belongs to the library.”

“There’s no better moment to look at all of humanity than a conflict, [which] brings out the best and worst in people,” says Fuhrman. “When it comes down to it, the idea that I’d get to work with people doing the best of things was a pretty nice idea… I was very blessed to have this opportunity.”