“Now that I’m enrolled in the program and enjoying it tremendously, I’m especially interested in the way libraries and in particular public libraries are helping to bridge the technological divide in some very genius ways.”

After years of assorted and eclectic jobs, Jakobe Illich has found his calling as an information professional and student at the San José State University School of Information.

Current iSchool MLIS student Jakobe Illich has always had a deep respect for libraries, the people that work in them and the services they provide to their communities. Says Illich, “So it was natural for me to want to learn more about the path that people in libraries take to operate successfully.” After graduating from his undergrad program at the University of Guam, Illich found himself in the working world just before the Great Recession, moving and learning from job to job. Libraries and their resources, though, were always his rock. “I always fell back on the library and the resources they provided. The staff was always friendly and helpful, and the books, CDs, and DVDs were always free and plentiful.” These experiences helped push him to the path he’s on today at the School of Information.

Now, as a library assistant at the Phoenix Public Library, Illich feels he has found his footing. “I enrolled at SJSU right after I was hired,” Illich says. “I knew this was the path I wanted to take even if it takes me twenty years to find a full-time job afterwards.” He anticipates that it won’t quite take two decades, considering how much the iSchool is preparing him. On what led him to SJSU for his MLIS, despite looking at local Arizona programs, Illich says, “after starting at the library I ran into several coworkers who spoke highly of the program.” He continues, “After doing a bit of research, I found out that not only is it well ranked with world class teachers, but it’s also one of the most inexpensive programs I could find to boot.”

A Long and Fruitful Road to the iSchool

Illich’s eclectic job history features time spent as a fast-food employee, a sign-flipper (“human directional assistant,” per Illich), a reservist in the Coast Guard, a pedicab driver (pictured below), hotel manager and more. He sees each of these roles as contributing to him finding this path in his life. However, none 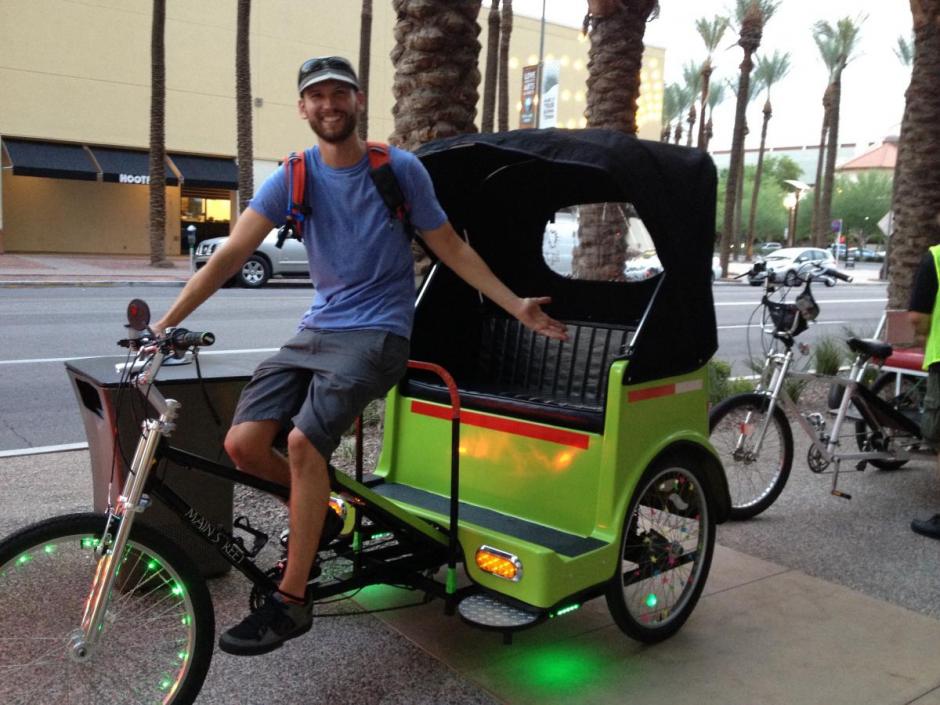 affected him more so than his role right out of undergrad in Guam, at The Guam Federation of Teachers where he helped support and assisted teachers, bus drivers, cafeteria workers, and, yes, school librarians. “I really got to know one of the members, a school librarian who is now president of the union,” says Illich. “I came to seriously value the work librarians do, and that experience sticks with me to today.”

The iSchool, in tandem with his position at the Phoenix Public Library and building off his work experiences, has shown Illich many hard truths about the communities that librarians serve. “I was surprised to learn that there are still so many children that do not have internet access at home,” says Illich. “In some school districts near me it’s almost half of all the students.” This knowledge has proven to Illich just how important libraries are even in today’s modern era. When the library isn’t open, many children are forced to go to McDonald’s or Starbuck’s for their Wi-Fi or use their parents’ subsidized cell phone plans. While these options work, none of them provide the ideal space that a library can. Says Illich, “This shows me that we still have a serious effort to make in regards to helping these kids have the same resources available to more fortunate ones.” He continues, “I did a project that looked at library bikes, which are being used in communities as Wi-Fi hotspots and offering homework help in places that need them. It works!” More than anything, Illich’s course work at the School of Information has taught him that the LIS field is an area of study that creates a real impact in communities, benefiting children and adults alike.

Illich is proof that willpower and resolve will eventually pay off. “Don’t give up!” he says when asked if he has any career advice for other students. “I think I applied for my current position at the library six times over the course of several years before finally getting hired on.” Illich also suggests volunteering as a great step in the right direction, though he knows that it can be difficult to spend time volunteering when you need to make ends meet. Still, he couldn’t set up an interview until he started volunteering and learning the ropes and people of the institution. In the end, though, he says, “it really takes dedication.”

As for Illich’s future after graduating in a year or so, he’s keeping his options open and varied. “I want to work full-time in a library and have health care,” he says. “It seems simple enough, but it’s also complicated.” He continues, “I might have to move to a vacant position outside Arizona, and I’m fine with that.” He’s also not picky as to what kind of library work he does, though he’d be more than happy to continue serving adults at a public library. “I will be happy to work at any library, be it medical, law, academic, a prison or anything else.” So, while Illich doesn’t know where or what type of library he’ll be in, he is certain that libraries are where he belongs, helping to provide a future for not only himself but his wife and soon-to-be born child as well.