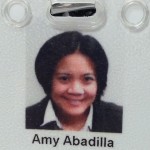 A member of the second MARA cohort, 2012 alumna Amy Abadilla now works as a Records Coordinator for Sound Transit’s Procurement & Contracts division, based in Seattle, Washington.

Amy initially came to the field of Records Management because of an interest in managing her own photography archive as well as her friends’ music archives, especially describing and preserving them. In later professional positions, what interested Amy was an opportunity to build a records management program from the ground-up. To be able to guide a division in file naming conventions, storage, retention and disposition scheduling, and security particularly appealed to her.

Amy chose the MARA program at SJSU because of its online format. It allowed her to pursue a degree while working full-time at a library. She especially enjoyed being able do work for class anywhere. In fact, Amy recommends taking schoolwork along when you travel, so that you can sneak in some studying whenever you find a free minute.

At her current position with Sound Transit, Amy serves as a Records Coordinator for the Procurement and Contracts Division. She manages the Division’s library of contracts (comprising a range of 12 aisles of high-density shelving) and is working toward implementing a cohesive file share between departments. Amy also compiles a publicly accessible bi-monthly report of upcoming procurements of contract work for vendors to partner with Sound Transit.

The position is challenging because, as Amy points out, Sound Transit is expanding public transportation services to three populous counties in western Washington. The challenge for a Records Manager is that there are countless types of records throughout the organization. Each department, even each construction project, has its own document control team and methods of handling records. Amy’s goal involves working collaboratively with all Sound Transit departments to foster a cohesive records management program, which follows state and federal guidelines.

The most rewarding aspect of Amy’s work is observing the tangible results of her efforts. Records Management enables Sound Transit to function, so when she takes public transportation and sees others using this crucial service, Amy feels proud of her role in making it possible.

For up-and-coming Records Managers, Amy recommends treating internships as if they were paying jobs since they may either lead to paid positions or strong references for the job market. Regarding resumes, Amy suggests emphasizing not only your duties but also the specific, tangible results of your work, such as reducing the number of paper records in an organization by 75%, for example. For additional tips on landing a job, she recommends checking out the blog askamanager.org. Finally, Amy believes that demonstrating your passion and interest for the field is what will make an impression on potential employers.