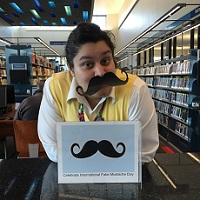 Angela Ocana, a 2014 graduate of the iSchool’s Master of Library and Information Science degree program and former grant coordinator and current branch librarian for the Santa Clara City Library, earned the honor for her planning and implementation of “outstanding, creative and innovated service for young adults in grades 6 – 12,” according to the CLA website.

Ocana said the teens she works with are “hands down” the best part of her job, and she feels fortunate to be able to spend time with them every day after school playing games like Exploding Kittens or just listening to “the latest drama of who likes who.”

“Everything else I do, from the daily programing, to the huge events, overseeing the collection, are all just icing on the cake. Additionally being an advocate for teens is amazing. Fighting for teens’ rights to be themselves, provide materials and programs that interest them can sometimes be a battle with other patrons in the library or staff, but I am honored that I get to have that privilege,” she said.

Ocana’s work has earned her other awards: the PR Excellence Award from the CLA in 2012 and the John Cotton Dana Library Public Relations Award from the American Library Association in 2013. Moreover, she received an $8,000 award for a systemwide comic book convention, and with the skills she learned in INFO 282 Grant Writing with Patty Wong, she wrote a grant proposal for urban homesteading for Santa Clara residents. That resulted in a $50,000 grant through the federal Library Services and Technology Act.

Yet it was Ocana’s unique programs highlighting teens’ needs and a desire to try new things such as a Teen Library Council and a Girls Who Code program that have earned her the Youth Services Award, which she is honored to receive.

“It is awesome! I would never have thought that someone would be giving me an award for the job that I do because my job is so cool and doesn’t feel like work. Plus, this award makes me feel like I am living up to all the great librarians I have had the pleasure of meeting and working with,” Ocana said.

Santa Clara City Library Branch Manager Cheryl Lee said in a news release: “When Angela blew out every circuit in the program room I knew she was either crazy or amazing. As I shoveled Tapatio Twinkies into my mouth I leaned toward crazy. Our Teen Chopped-Challenge was such a success that I couldn’t deny her the title of awesome teen librarian. Angela has a charming personality with a lovable character.”

Ocana said the iSchool prepared her for youth services librarianship through YA classes, particularly a course on censorship of young adult materials and a guest talk by another MLIS graduate, Amy Sonnie, on her book Revolutionary Voices that motivated her to become a youth librarian.

“SJSU is great at giving you the foundation to build your way to becoming a librarian. A lot of the professors are doing wonderful projects at their own libraries. It’s awesome that you can bump into them at conferences and meetings and really see the work they do away from school,” she said.

Ocana feels “incredibly lucky” in her career and believes “part of the job of being an awesome librarian is to give back, take someone under your wing who you think is making a difference and who is really passionate about what they do and help them.”

She also advised aspiring librarians to connect with those already in the field. “If you don’t know any cool librarians, find them,” Ocana said. “Shoot them an email, ask them questions, get some advice, start making connections and getting to know people. It’s important.”

Ocana will be honored during the CLA conference held November 3 – 6, 2016 in Sacramento, California. For more information about the award, please visit the CLA website.