Westwood, N.J. Children’s Librarian Denise Lester was both delighted and surprised when she learned that she’d been honored by the New Jersey Library Association for an ingenious pen pal program.

A recent alumna of the School of Information at San José State University, Lester was gratified to have her hard work in organizing an international exchange recognized; however last-minute technical issues while uploading her submission had left her unsure whether or not she’d made the deadline. 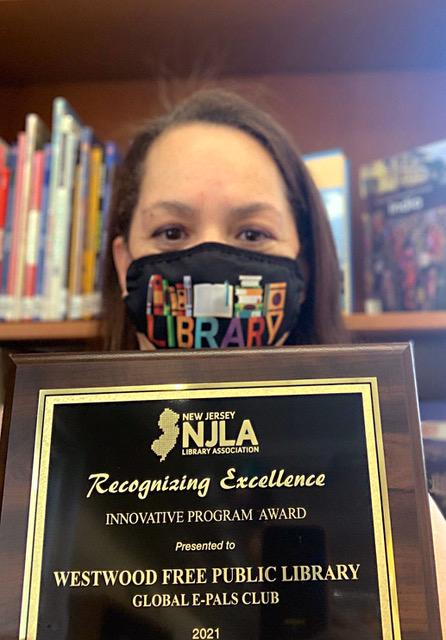 “It was a big surprise, ‘Oh there’s no way in the world I’m going to get it because now it’s so late!’ But they knew it wasn’t me,” Lester remembers. The NJLA Innovative Program Award recognizes programs that creatively engage the community and meet a community need. Lester’s Global E-Pals Club more than met the bill; it not only facilitated an exchange of letters between Westwood Free Public Library’s young patrons and children from around the world, but it also connected club members with adult immigrants in their own community.

Lester, who completed the fully online Master of Library and Information Science degree program in 2018, has learned to navigate technical glitches with aplomb. In the past year she put the library’s summer reading program online, combed the Internet for resources and juggled participants in different time zones, in order to give her young club members a virtual travel experience at a time when physical travel was at standstill.

“There’s absolutely no question that I got that from SJSU,” Lester says of her ability to adapt her programming to the virtual environment. “I was able to bounce back and forth to different platforms, I was able to share screens and pull up all kinds of stuff without any—mostly any—problems.”

For her cultural exchange program, Lester used the E-Pals online platform to contact teachers from other countries and propose an exchange of letters with their students, while also reaching out to local Westwood students through Westwood library’s social media platforms and email. She developed lesson plans for a handful of countries and curated videos that provided virtual tours of their landmarks and attractions. Her original goal was to include a Zoom meeting between the pen pals in Westwood and abroad, but time differences made that feature impossible. So Lester came up with a clever substitute.

“Westwood library is at the hub of the English as a Second Language department in Bergen County,” Lester explains. “So, I connected with the two coordinators of that department and asked them if any of their students might be interested in speaking to my group virtually.” 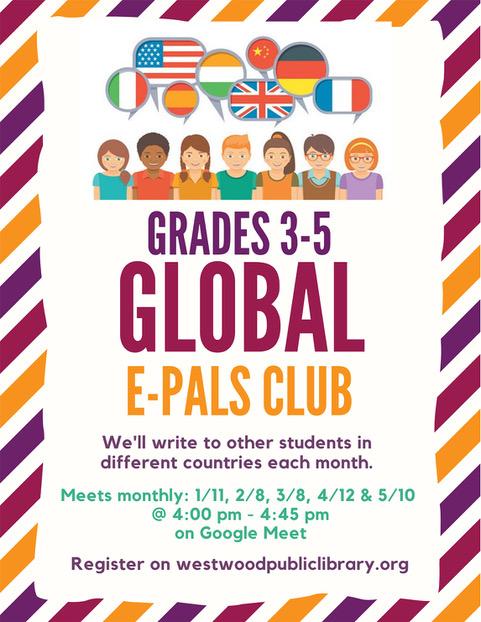 After initial hesitation, several adult learners agreed to participate. The three-way cultural exchange was an immediate success with Lester’s club members. The Westwood participants clamored to read the letters from children their own age, but also engaged with the older English language learners and were fascinated by accounts of their childhood and schooling in their countries of origin. “I was surprised, because I thought they’d be quiet,” Lester recalls. “But they really were curious about where they’re from, and they couldn’t believe their school regimens. They really see how different it is!”

Lester and her group made virtual tours of Turkey, the Ukraine, and South Korea, among others. The experience broadened her group’s understanding of the world, and Lester believes the interaction with the ESL guests in particular helped break down stereotypes about immigrants to the U.S. “We had an engineer…they had post-grad degrees,” she says of the ESL learners. “That was another benefit.”

The program was a natural fit for Lester, who found her way to libraries after stints in publishing and pre-K education, jobs she enjoyed, but which did not “check all the boxes,” she says. At a local library, however, she found her calling. “I was a page there for two years and I knew, this is for sure where I’m supposed to be.”

While enrolled in the MLIS degree program, Lester focused on public librarianship and cites several classes as being particularly useful, including one on databases that “was the bane of my existence,” she admits. “Thank goodness I had to take it, because everything makes sense when you have to apply it directly to your job!”

Additionally, Lester valued a class she took on intercultural communication, which she credits with teaching her to look outside the familiar and canonical when selecting library materials. “There are kids out there that are not reflected in the canon and you need to meet that need because that’s still one kid in your community that is important and counts,” she reflects. The philosophy both accords with her interest in other cultures and brings rewards closer to home: “That feeling of satisfaction that I reached a kid with a book, it’s just one of the greatest moments for me,” she says.