Participants in the SJSU School of Information’s Circle of Learning scholarship program recently held a virtual reunion. The close-knit alumni group shared professional milestones and how the MLIS program has positively impacted their careers.

Earning a Master’s degree in Library and Information Science (MLIS) from the San José State University (SJSU) School of Information (iSchool) has greatly benefited graduates of the Circle of Learning (COL) scholarship program, with several attaining new professional milestones. COL alumni have been putting their MLIS degrees to work writing grants, authoring articles and books, serving on boards, attending conferences, delivering workshops, and working in a diverse array of information settings ranging from tribal libraries to universities, to medical libraries.

The close-knit group recently held a virtual reunion, an idea sparked by Susan Gehr (’13 MLIS), who received the iSchool’s Outstanding Thesis Award. “One aspect of COL that I always valued was the collegial collaboration element. We’re facing many similar things as Native scholars and professionals, and I was feeling the need to tap into our community expertise,” said Gehr, who added, “I just plain missed everybody! COL really pulled together a great bunch of people working on interesting things.”

Before earning her MLIS degree, Gehr served as the Karuk Tribe’s language program director for six years. During that time she co-edited a Karuk language dictionary with linguist William Bright. Her award-winning oral history thesis focused on the Breath of Life, an organization that has long worked to revitalize some of California’s indigenous languages. She now serves as co-chair of the advisory circle of the Institute for Collaborative Research and is principal investigator of a Documenting Endangered Languages National Science Foundation (NSF)- funded grant, focusing on long term care of language collections. 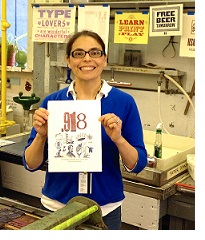 Gehr (pictured left) is also making her mark at Humboldt State University, where she works with Native languages in special collections as a reference specialist and shares her talents as an instructor. Her course, “Indigenous Identities in Film,” was accompanied by a campus-wide film festival made open to the public. Gehr will also be teaching during the summer session at the CoLang 2016: Institute on Collaborative Language Research held in Fairbanks, Alaska.

During the reunion, Gehr also shared with the group her tips for organizing her “virtual dance card,” in order to schedule her varied commitments, such a presenting at the upcoming Oral History Association meeting. In addition, her fellow COL graduates discussed their experiences with a range of career issues, such as tips on making the best impressions in a phone interview, ideas on how to approach salary negotiation, as well as their recent experiences serving or presenting with a variety of professional associations.

A member of Toastmasters International, Jerry Flanary (’14 MLIS), shared his career advice and discussed the importance of continuing to hone presentation and communication skills. Flanary made note that this is especially important in his role as an academic library professional working directly with reference clients at the Arizona University Libraries.

Professional development is also a priority for archivist Jonna Paden (’14 MLIS). She serves as the volunteer New Mexico Library Association archivist, working on arrangement, description and access to the association’s papers. She recently received a scholarship to attend this fall’s Association of Tribal Libraries Archives and Museums (ATALM) conference and looks forward to meeting up with other COL graduates who will be in attendance. In addition, Paden and COL alumna Valarie Kingsland (’14 MLIS), director of the Seward Community Library and Museum, in Seward, Alaska, will each be attending the International Federation of Library Associations and Institutions (IFLA) conference in Columbus, Ohio this August as 2016 IFLA IMLS Fellows. 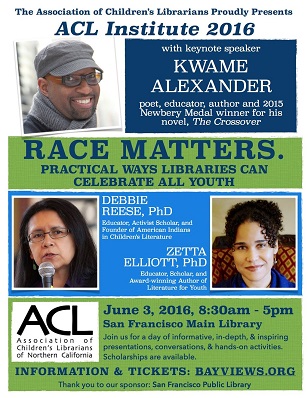 The MLIS degree has advanced consultant Debbie Reese’s career (’14 MLIS). She is the founder of the American Indians in Children’s Literature and shared that her MLIS degree has made an impact with librarians she works with in the field of children’s and young adult literature. She is a co-presenter at the upcoming Association of Children’s Librarians of Northern California Institute: Race Matters. Practical Ways Libraries can Celebrate all Youth, to be held in San Francisco this June. In July, Reese will teach an Association for Library Service to Children (ALSC) webinar, Collection Development: Children’s and Young Adult Books about Native Americans. Reese’s forthcoming article in VOYA magazine: “A Longitudinal Look at Children’s and Young Adult Books Indexed as Native American,” is part of VOYA’s June 2016 Special Issue, “Race and Culture and YA Literature.”

Several COL alumni also shared their recent news with the group by email. Mary Rogers (’14 MLIS), who works as a database and historical records manager for the Confederated Salish and Kootenai Tribal (CSKT) Historic Preservation Department in Montana, was the co-editor of the recent book, A Cowboy’s Life Is Very Dangerous Work: The Autobiography of a Flathead Reservation Indian Cowboy, 1870-1944. Rogers is working on a second project, this time about a female CSKT tribal member and her life during the depression and WWII. Rogers recently attended the Northwest Archivist conference in Seattle.

After completing the COL scholarship program, Yakama Nation Library’s administrator, Merida Kipp (’14 MLIS), went on to complete a Master of Science in Information Technology and Administrative Management (MS-ITAM) from Central Washington University, graduating with honors with a 4.0 GPA. Kipp (pictured left) has been instrumental in earning a range of grants for Yakama Nation Library since completing her MLIS degree, some of which include: an IMLS Native American Enhancement Grant, a Washington State Library Mindstorm Grant and a Washington State Library Digital Skills Grant. “I have written several successful grant applications that have helped the library to weed an outdated collection, purchase new books, host book distributions, provide access to current technology, and teach digital literacy skills. Future plans are to focus more on reading literacy,” Kipp shared with COL project staff.

Like many COL alumni who became active in the tribal library professional world through their scholarship, Kipp has continuously shared her knowledge back with the community. “I obtained a scholarship to attend Association of Tribal, Archives, Libraries and Museums (ATALM) in Washington D.C. to be a representative on a panel that discussed the value of Digital Inclusion in Tribal Libraries,” she said.

This impressive cohort of information professionals will continue to place a high value on collaboration and a commitment to the COL professional network. According to Gehr, “Several of us mentioned getting together a few times a year virtually, and planning reunions through conferences like ALA or SAA or regional conferences. We’ve talked about collaborating on a publication of some kind, but nothing has yet solidified.”

The COL program was funded by a three-year grant from the Institute of Museum and Library Services (IMLS) in partnership with the American Indian Library Association (AILA). The scholarship program supported 19 American Indians and Alaska Natives to pursue an MLIS degree, thereby increasing the number of Native librarians who understand tribal culture and are committed to addressing the challenges faced by libraries serving Native patrons.