Five students who will be enrolling in the Master of Library and Information Science program at San José State University’s School of Information in fall 2020 have received the Director’s Scholarship for Excellence, totaling $7,110 in award funding; each award is valued at $1,422.

The Director’s Scholarship for Excellence was created to recognize the potential of new students to serve as information professionals and take leading roles in shaping the profession, and to assist them as they embark on their master’s degree journey.

To apply for the scholarship, applicants created infographics and digital posters that demonstrated their passion for the information career field by highlighting their desired career paths, or what drew them to the information profession. 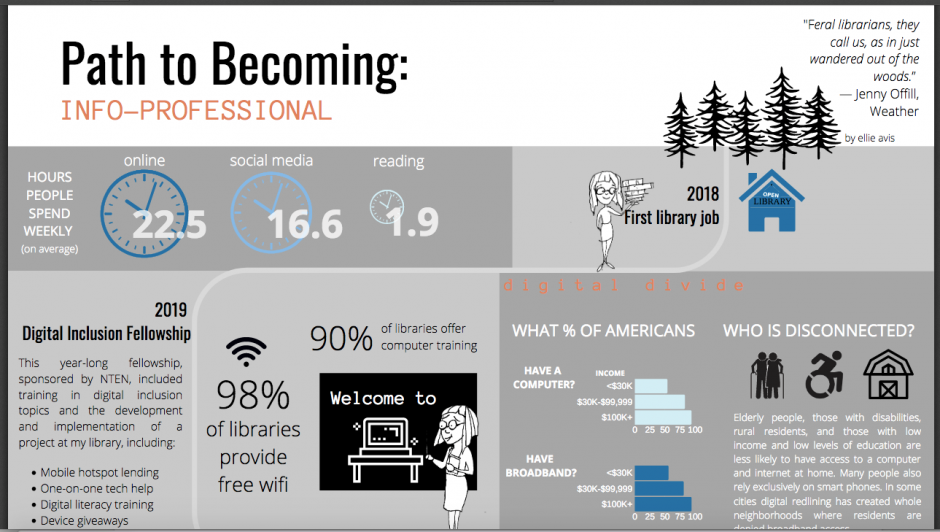 With the deadline to apply only a few days away when she learned about iSchool’s scholarships for newly admitted students, Ellie Avis had just enough time to finish making her infographic, Path to Becoming: Info-Professional, an experience she found challenging. “For me, it would have been easier to write an essay! Distilling everything I wanted to say into a coherent graphic was harder than I expected.

“I knew I wanted to include some key experiences and things I’ve learned that have directed me toward the choice of librarianship as a career. I came up with the (quite literal) idea of having a path to orient the viewer, with myself traveling along it toward the goal of getting an MLIS degree. I also knew I wanted to include hand drawn elements to give it some character.”

Avis acknowledged that she hesitated about committing to graduate school because she was nervous about taking on more debt, and said she felt “really grateful and excited” to learn that she had been selected for the scholarship. “It was also a great relief to know that I would be getting some financial support for this endeavor.” 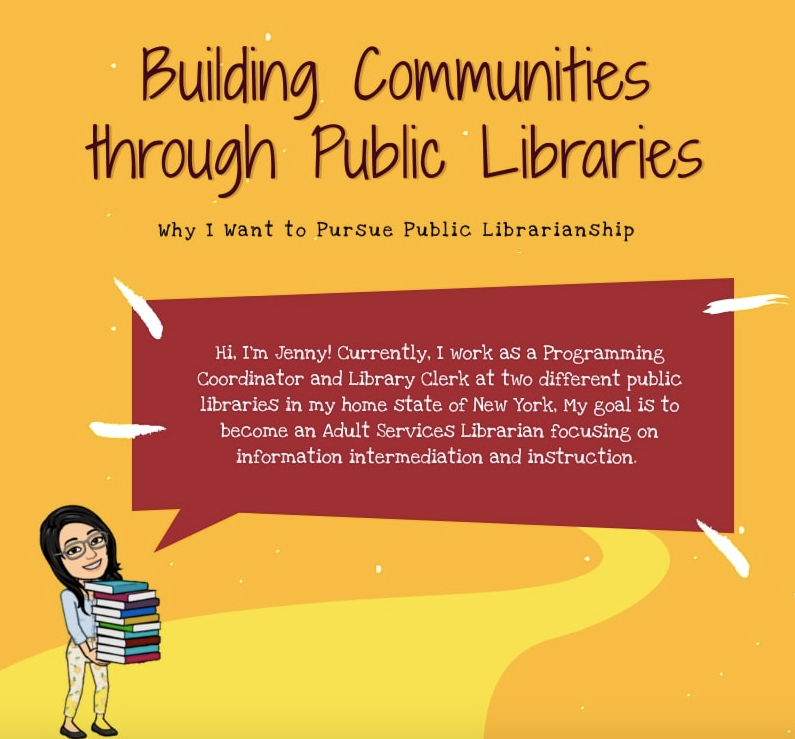 Before designing her presentation, Building Communities Through Public Libraries, in Piktochart, Jenny Chin first laid out the text elements in a Google document, and researched data online to support her points. “I also looked at winning submissions from previous years on SJSU’s Pinterest board for more guidance.”

Chin, who currently works part time as a programming coordinator and library clerk at two different public libraries in her home state of New York, intends to pay for her MLIS “completely out-of-pocket.” She said she applied for the Director’s Scholarship for Excellence because of financial need, and because she was “very intrigued” by the creative scholarship application process. “It turned out to be challenging, but fun, too,” said Chin.

Though it helped that she was familiar with using online graphic design platforms Canva and Library Aware for both of her current jobs, Chin said her initial draft looked “very different” from the final version. “There were definitely many revisions I had to make, and I learned a lot in the process, so you could say it was my first lesson attending SJSU!”

“I was ecstatic when I learned I would be a recipient of the scholarship, and it was definitely a bright moment in these trying times,” she said. “It made me excited to start my first semester at SJSU with such a positive sentiment, and I hope one day to give back to the SJSU community as I have received today.”

Megan Ward began planning her infographic, Operation Medical Librarian, by reviewing the requirements and researching the different career paths she could pursue with an MLIS degree, which served as a jumping-off point. “After that, I picked five careers that sounded interesting, and did research on the Internet. From there, I was able to narrow down my choices to one I wanted to focus on — medical librarian.”

While brainstorming ideas for her application, Ward envisioned a medical theme, and sketched a person lying among a team of medical staff. “It was then I remembered the Hasbro board game ‘Operation’ from my childhood, and thought that would make a good theme for the infographic.”

Ward decided to apply for the scholarship because, like many others, she was laid off due to the coronavirus pandemic. “My boss was unsure when she would be able to open for business again or be able to hire me back,” said Ward. “The scholarship seemed to be a good idea to help me financially down the road when school starts.”

Upon learning she had been awarded the scholarship, Ward said she “felt happy” to have been granted the support. “However, I feel that the real reward was the opportunity it gave me to learn about how I can use this degree in the workplace.

“When I applied for the MLIS program, I had no idea how many different career paths this degree can lead to. It helped me consider new options I hadn’t heard of. Every college student should consider doing a similar activity with their degree in mind and ask themselves, ‘what am I going to do with this once I have it?’”

Congratulations to all of the winners of the Director’s Scholarship for Excellence! More information about scholarships for incoming students may be found on the Scholarships web page.