Leaders in the field of information will come together online on March 16, 2016, to discuss the most pressing issues affecting privacy in the digital age at the Library 2.016 Worldwide Virtual Conference. Register for free today! 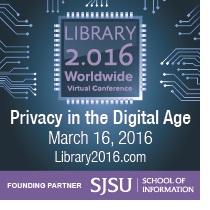 On March 16, 2016, from 12 p.m. to 3 p.m. PDT, leaders in the field of information will come together online to discuss the most pressing issues affecting privacy in the digital age at the free Library 2.016 Worldwide Virtual Conference sponsored by founding partner San José State University (SJSU) School of Information. The March mini-conference is part of a series of three topical online conferences presenting the most significant issues facing libraries and information professionals today and will take the place of the single annual conference of years past.

“By breaking up the day-long conference into three separate and focused events,” explained Dr. Sandra Hirsh, director of the SJSU School of Information, “we can facilitate deeper conversations on issues of critical importance, such as privacy, pedagogy, and the future of the library.” Hirsh also added that the new format of the conference series makes it easier for professionals all over the world to attend the three-hour events in their entirety and participate in important conversations.

The first mini-conference of the series, Library 2.016: Privacy in the Digital Age, will feature presentations by a number of information professionals, as well as five exceptional keynote speakers: Jamie Larue, director of the American Library Association’s (ALA) Office of Intellectual Freedom; Jonathan Hernández, associate researcher in the Library and Information Institute at National Autonomous University of Mexico; Deborah Caldwell-Stone, deputy director of the ALA Office of Intellectual Freedom; Alison Macrina, director of the Library Freedom Project; and Lee Rainie, director of Internet, science, and technology research at Pew Research Center.

During the March online event, sessions and speakers will discuss the roles and responsibilities of libraries regarding the protections of intellectual freedom, privacy, free speech, information access, and freedom of the press. Participants will be asking provocative questions, such as are these still core values of the library profession, and if so, how are libraries and librarians responding to the increasing complexities of data tracking and desires for data-informed services and marketing?

Keynote speaker Larue believes “this conference is important because we need to take stock every now and then about the balance between our right to know, and what is known about us,” he stated. “That thin line is the difference between liberty and tyranny. And it’s better to find the precise location of that line when we’re still on the right side of it—if indeed we are.”

Larue’s talk will address how technological developments are affecting our privacy. He explained, “At first, technology—first in the form of the PC and spreadsheet, and now in the form of the Internet and smartphones – was liberating. It freed us from the gatekeepers of information. We could get the information we wanted, 24 hours a day. But somewhere along the way, it became clear that information was being gathered about us. Credit card companies track every purchase. Advertisers know how often you visit their sites, and whether you buy anything. Your phone broadcasts your location. Security cameras capture images of who you had lunch with, or saw in the park. When used for convenience or safety, these violations of privacy seem small. But are they?”

Keynote speaker Hernández will also lend his expertise on the importance of privacy in the world today during the March mini-conference, and noted that information professionals have a particular role to play in safeguarding privacy. “As librarians, it is our duty to understand privacy issues, especially in this digital age in which our liberties are constantly threatened either by governments, companies, or individuals,” he commented. “The library must remain as a neutral and diverse place in which our freedoms are protected.”

The online conference will take place via Blackboard Collaborate, and proposals for conference presentations are being accepted now. The sessions will last for 30 minutes, and presentations should be no longer than 20 minutes. Slots are limited, and may fill before the final March 11, 2016 deadline for proposals.

The Library 2.016 Worldwide Virtual Conference series is free to attend. Registration is open for the March 16 event now. Participants in Library 2.016: Privacy in the Digital Age event are encouraged to use the hashtags #library2016 and #privacy on social media leading up to and during the event.

The Library 2.0 Worldwide Virtual Conference series was founded in 2011 by Hirsh and Steve Hargadon of Web 2.0 Labs. Hirsh and Hargadon serve as co-chairs of the open, online conferences.