The story of Annie Cipolla’s life could easily be one found on the shelves of a library. Because of her compassion and commitment to patrons, she was one of 10 2017 I Love My Librarian award winners.

The San José State University School of Information graduate’s family fled China during the Communist Revolution in the 1940s. They found themselves in New York City with only two suitcases and unable to speak English, according to a TEDxYouth talk she delivered in 2014. The presentation was produced by students from the Teen Council program at the Pacific Palisades Library where she worked as a young adult librarian at the time. 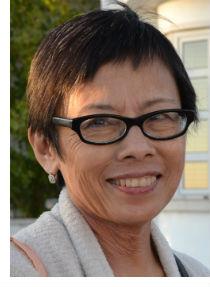 But Cipolla’s journey to earning a Master’s degree in Library and Information Science and becoming a librarian followed a long and winding road. At age 17 she created a “bucket list” of what she wanted for her future. On it she planned to go to college, have an exciting career, and travel to Japan and France. She majored in East Asian studies, art history and religions. She spent her junior year of college in Tokyo where she learned pottery and studied with Buddhist monks. Her senior year she experimented with producing multimedia presentations, which led to her becoming a broadcast journalist, managing editor and executive producer in Baltimore, San Francisco, New York City and Los Angeles. She thought that by working in journalism she could “somehow change the world,” she said during the TED talk.

But after having a daughter, the long hours of working as an entertainment reporter in Los Angeles made her reconsider her career choice. Cipolla always wanted a profession in which she helped people.

“I realized I could approach librarianship with the same creativity and passion that I had used to develop and produce television shows. I still deliver information, but instead of in a newscast, I do it in emails, in classrooms, and at the reference desk,” she said. “I still am part of a team, but instead of writers, producers and reporters, the team is comprised of other librarians and circulation staff.”

Cipolla’s passion for helping teenagers “get launched” for the rest of their lives translated into workshops and seminars that provided them with useful information on how to successfully navigate the college admission process. Her life story inspired library volunteers to produce an officially licensed TEDx talk where she shared her experiences. She has assisted a number of teenagers in finding summer jobs and internship opportunities to provide them with practical experience before launching into careers. In Cipolla’s I Love My Librarian nomination, she was praised for strengthening “the fiber” of the wider Los Angeles community.

The I Love My Librarian award is a collaborative program of Carnegie Corporation of New York, The New York Public Library, The New York Times and the American Library Association. The annual award recognizes up to 10 librarians who have had an impact on their communities and lives. In 2017 more than 1,100 librarians were nominated for the notable award, according to the ALA’s press release.

To learn more about Cipolla, read her nomination letter or watch her TEDxYouth talk. For more information about the I Love My Librarian program initiative, visit the website.