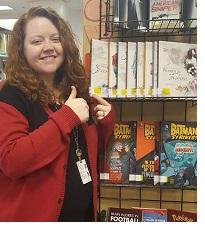 Two graduates of the San José State University School of Information were selected to participate in the American Association of School Librarians’ inaugural Induction Program.

Emily Ratica and Suzanne Sannwald are among the 10 school librarians from all over the United States chosen to assist future K – 12 school library leaders in recognizing and developing their leadership abilities. Participants will complete 12 month-long thematic units with readings, discussions and projects. Topics include community collaboration, implementing educational technology, leadership theory, and mentoring.

Ratica said the cohort meets using the American Library Association’s e-Course platform, but they also chat through other digital resources like Twitter (#aaslleaders), FlipGrid and Zoom. After completion of the program, members will meet at the AASL National Conference in Louisville, Kentucky in 2019.

“It will be fun to finally meet everyone in real time! It’s crazy to think that we are almost halfway done—it has been a really awesome opportunity to see how school librarians work outside of my district. I have been so inspired by all our guest speakers and everyone in the program,” Ratica said.

2018 marks 10 years at Arroyo Valley High School in San Bernardino, California for Ratica. She began in the English department teaching all grade levels and serving as the department chair. She became the teacher librarian three years ago.

“During those first six years, I was having four kids and working on my MLIS from the iSchool. SJSU was great preparation for my current position and even though I had already had a lot of experience working with teenagers, I didn’t feel like anything was redundant. In fact, in many of my classes, I was able to share my experiences with others and the instructors encouraged me to share what I had learned ‘in the field,’” she said.

When she first received her Master of Library and Information Science degree, Ratica didn’t pursue a school librarian credential because she didn’t think she would want to work at the high school level. She graduated from the iSchool in 2013, and her principal approached her about taking over the library in 2015.

“I have nothing but glowing praise for the iSchool and have even recommended it to a few of my former students, and one is just starting on her MLIS and is interning with me. The iSchool also worked really well with me and my district to make sure all of my paperwork was done correctly for the credentialing process,” she said.

Participating in the AASL Induction Program has been beneficial to exposing Ratica to how other school librarians and districts function.

“I started my career at this school and have only ever really known how my district works. Being a part of the Induction Program and seeing how other librarians work, how their schools function, and what their districts look like, has been eye opening. I am learning so much about how I can improve my library and myself, but also how I can improve as a collaborator, educator, and leader,” she said. 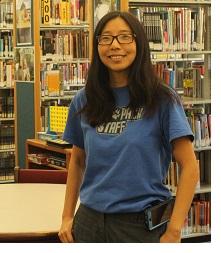 Sannwald said the AASL Induction Program is already helping in terms of her leadership capacity because it is giving her the inspiration and motivation to create a number of project proposals and implement them.

“While work is always busy just keeping up with regular daily demands, this program helps me push myself out of my comfort zone to try out new ideas. Furthermore, being part of a built-in learning community like this provides good support while doing so,” she noted.

During the five years she’s been working as a teacher librarian at West Hills High School in Santee, California, Sannwald pursued her MLIS, graduating in 2017.

“I found that the course work nicely complemented my professional work. I was able to directly apply what I learned into my daily practice at the high school, which both improved my effectiveness with students and motivated me as a student.

“Since I love learning, it’s been fun feeling like a student again by participating in the AASL Induction Program, especially since one of the leaders is Dr. Mary Ann Harlan, who was one of my influential iSchool professors,” she said.

To learn more about the AASL Induction Program, visit the ALA page.