Three MLIS students recently traveled to Guatemala to promote the importance of information literacy and access through the Librarians Without Borders volunteer program.

San José State University School of Information students traveled to Guatemala to promote the importance of information literacy and access through the Librarians Without Borders volunteer program.

Melissa Mejia, Joy Kim and Rachel Riter spent April 21 through May 1, 2017, volunteering at the Miguel Angel Asturias Academy in Quetzaltenango on projects such as cataloging, processing, and adding new items to the library’s collection; developing library programming targeting all students and levels through multiday library events; and conducting professional development workshops for teachers supporting library integration into the curriculum. 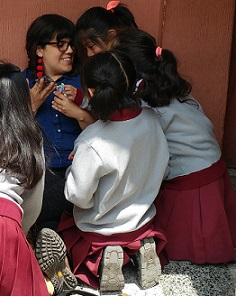 Mejia, who had never been to Guatemala prior to the trip, said she came across the LWB website a few years ago when she enrolled in the SJSU iSchool’s Master of Library and Information Science online degree program.

“I hoped to one day be in the position to be able to apply [to the LWB program] for possible consideration,” she said. “I wanted to apply because as a child I remembered traveling through parts of rural Mexico to visit my grandparents, and I was able to see the lack of educational resources available to my family there.”

While living in a small rural town in central California, she said the public library served as her window to the rest of the world.

“I learned then what I advocate for now: that libraries offer valuable access which ultimately leads to opportunity. I believe in the importance of promoting and protecting this access everywhere; my librarianship philosophy transcends borders,” Mejia said.

As a fluent Spanish speaker, she felt she had the advantage of getting to know many of the locals on the LWB trip by communicating directly with them.

“They talked to us about their goals and visions for the students of the Asturias Academy and expressed sincere gratitude for the help that LWB has provided over the last eight years,” she said. “The school library is quite impressive; it has evolved into a vibrant little gem, a unique experience in a country where libraries are traditionally closed stacks and materials are few and extremely dated/irrelevant.”

According to Mejia, LWB added more than 300 books to the library, and she and another volunteer developed a Library Day program for grades 4 through 6.

Our program entailed a dramatized oral storytelling performance based on David Wisniewski’s ‘The Rain Player,’ a Mayan folktale about the power of unity within a community. The story explores the relationship between humans, nature and wildlife all depending on one another to end the heavy drought that has threatened their existence,” she said. 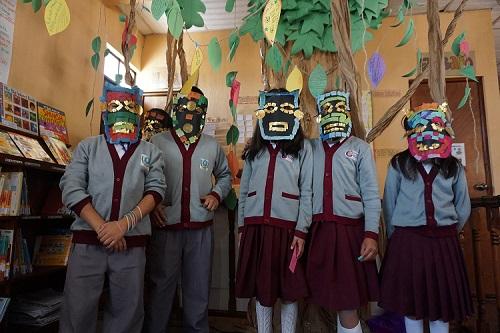 Following the performance, students were invited to create their own masks inspired by Mayan folklore. Their goal for the program was to connect literacy as a vital part of the community through Mayan folklore that depicts a positive relationship between humans, wildlife and the library.

Kim learned of the LWB Guatemala trip through an email announcement sent by the iSchool to its graduate students and was immediately drawn to LWB’s cause to promote literacy in a primarily indigenous Mayan school. She said she’d previously traveled to the country through a faith organization that worked with a local orphanage, but her participation then was “far more minimal” because she wasn’t with a professional group.

“The purposes for these trips were also quite different,” she said. “I think LWB’s strength is that it was established in 2009 in partnership with the Asturias Academy, so we went in with team leaders who had working relationships with the school leaders and the community. This was a significant difference because the expectations were in place from past teams and the communication was already established.”

The volunteers were split into two groups: Cataloging and Library Day Programming, with Kim being placed in the former, which dealt mostly with selecting books, labeling, and categorizing titles in the school library, she explained.

“For three days, we had every class come and visit us for planned activities with students after the presentation depending on the age/grade level. We spent half of the time for Library Day, which is a series of skits based on a Mayan hero Pik who defeats Chaac the rain god at a game of pok-ki-tok,” Kim said.

The rest of her time was spent cataloging the hundreds of books purchased for the library. Kim said the job proved difficult because the school had no cataloging software, so everything was organized using Microsoft Excel.

However, despite the technological difficulties, Mejia and Kim found the collaborative work with others from many backgrounds to be a rewarding experience.

“Together we experienced the reality that so many people in the world continue to live with very little to no access to institutions like a library, a truly humbling experience,” Mejia said.

Kim felt the kind of bonding they experienced “went past skin-deep conversations about the weather,” describing it as a “powerful, transformative experience resulting in a broader global perspective on librarianship with a deeper interest in information access in post-communist countries.”