The art of storytelling is on full display with support from the Noche de Cuentos Mini-Grants awarded by REFORMA. The National Association to Promote Library and Information Services to Latinos and the Spanish Speaking recently announced that two of the seven grant recipients for 2020 are from the San José State University School of Information.

Carol Lovos and Vilma Sandoval-Sall were selected from 15 eligible submissions that demonstrated originality, creativity, level of community involvement, and showcased Latinx literature and culture. Each of the winner’s organizations received $300 to support their libraries’ Noche de Cuentos programs during Hispanic Heritage Month, September 15 through October 15.

A REFORMA member, resident of California, and a former elementary school teacher, Lovos has long been focused on services for the Latinx community. “Working collaboratively with my coworkers, we had planned a series of programs for Hispanic Heritage Month,” she said. “When I heard about the Noche de Cuentos grant opportunity, I immediately thought a virtual storytelling program would be a perfect fit!” 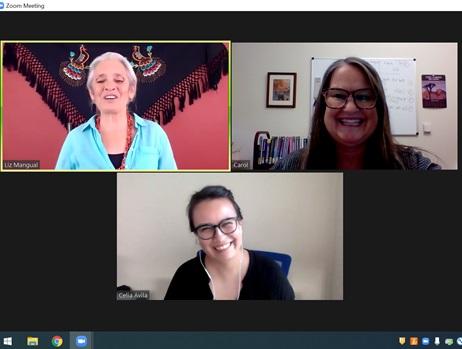 Lovos, who had already been working in libraries when she began the Master of Library and Information Science program at the iSchool, said it was her experience, plus her recently acquired MLIS degree, that made landing her current position at Tulare Public Library possible. As adult services librarian, Lovos is responsible for supervising the Adult Services Team and the Veterans Resource Center.

Tulare Public Library’s Noche de Cuentos event was the first of several virtual programs hosted on Zoom in its first annual month-long celebration, Latinx @ the Library: Honoring Hispanic Heritage Month. The bilingual event opened with a puppet show, “Rubia and the Tres Osos,” performed by library staff, and was followed by a storytelling-themed show featuring songs and stories in Spanish and English, featuring storyteller Liz Mangual.

“Storytelling is an art form that is built on tradition and culture,” the 2019 graduate noted. “The stories that Liz Mangual tells are a glimpse into her Puerto Rican heritage. Storytelling is an excellent medium for building comprehension skills without the aid of pictures.”

The program was presented by a local Maya family and members of the weaving cooperative, Weaving for the Future/Tejiendo para el futuro. Program highlights included a read aloud of Abuela’s Weave by Omar S. Castañeda, the story of a young girl and her grandmother weaving and going to market together to sell their textiles.

REFORMA began the Noche de Cuentos Mini-Grants program in 2010 to promote and preserve the art of storytelling within Latino communities in the U.S. For more information about awards, grants and scholarships offered by the national association, visit the REFORMA website.