SJSU School of Information alumnus Dr. Dennis M. Swanson (’95 MLIS) is the new dean of library services at the University of North Carolina at Pembroke. “My program at SJSU was simply amazing…” 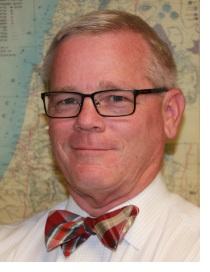 A San José State University (SJSU) Master of Library and Information Science (MLIS) alumnus has been named dean of library services at the University of North Carolina at Pembroke (UNCP).

Dr. Dennis M. Swanson (’95 MLIS) said he’s excited about the direction of UNCP, which has been ranked as the most diverse public university in the United States.

“The new chancellor and provost have an amazing plan for the university, and the vision I presented in my interviews lined up perfectly with them,” he said. “Part of my presentation to the administration and faculty is now in the new library handbook: ‘The library is a central pivot of a university education: a place of scholarship, intellectual community, growth, and freedom.’”

The library services dean said he’d always had an interest in library work before pursuing an MLIS degree and attributes his career success to his education at SJSU. Swanson said he finished the MLIS program in two semesters.

“My program at SJSU was simply amazing and provided the foundation for everything I’ve done in the profession. Dr. Debra Hansen was my adviser and was exceptionally supportive. I had been hired as head librarian at a graduate school and needed to finish the program as fast as I could,” he said.

Swanson advises MLIS students to learn as much about every aspect of library work as possible and encourages graduates to learn how to be an advocate for not just the libraries they’re employed at but for all libraries.

“San Jose State is a great university; it has a great School of Information, and I’m proud to be a graduate. It was an amazing experience, and my education there is the reason I’m here now,” he said.

Prior to accepting the library services dean position at UNCP, Swanson worked as library director and vice president at The Master’s Seminary.