Stefanie Vartabedian, Carlos Medina and Sara Brylowski will be serving on the board as president-elect, director-at-large and communications committee chair, and director-at-large and programming and tours chair, respectively. The new board members join alumna Bridget Thrasher, who transitions from president-elect to president, and alumna Valerie Sweeley, who takes on two roles as treasurer and secretary.

Vartabedian, who graduated with a Master’s degree in Library and Information Science in December 2016, said her former involvement in the American Library Association Student Chapter at the SJSU iSchool helped her gain perspective into the importance of membership engagement, event planning and social media marketing that she hopes to bring to the SLA-SV chapter.

“I wanted to take on a role that would allow me to develop leadership skills and learn from great role models in a safe environment. And I hope to see more member engagement, especially at events, as well as collaboration with the San Francisco chapter,” she said.

President-elect Vartabedian has worked in legal, tech, music, and recording arts, and shortly after graduation, she began a contract role at Pandora Music in their curation/metadata department. In April, she started working on a music metadata project for Apple.

“I have always geeked-out about music and with the advent of digital music, metadata is especially important and has a huge impact on the user experience. I’m really enjoying this work thus far and enjoy the challenges that the marriage of music and information in the digital space brings,” Vartabedian said.

Medina, who earned his MLIS degree in 2000, is employed as a content and acquisitions specialist at Exponent Inc. He became “hooked into the library world” after a stint working at his local library during high school.

Brylowski is currently enrolled in the MLIS degree program and plans to graduate in 2018. With a background in marketing and design, she is excited about her new appointment as programming chair. “I have always enjoyed planning events, and am looking forward to flexing the muscle again for SLA,” she said.

After a year of service on the board as president-elect, Thrasher, ’16 MLIS, will begin her term as president. She works as an earth and sciences librarian at the Branner Library at Stanford University.

Sweeley is a 2007 graduate of the MLIS program and put her library and information science skills to work at Applied Materials as an information specialist. As secretary for the SLA-SV chapter, she aims “to help others become more involved, especially students and new graduates.”

iSchool alumni and students have a long history of leadership in the SLA-SV chapter. Most recently, Elisa Ewing, ’11 MLIS, and Cory Laurence, ’15 MLIS, have completed their terms on the board. 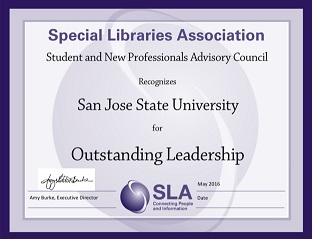 The association posted on Facebook: “A completely virtual group, SJSU student group members make it their purpose to promote special librarianship and create professional engagement and networking opportunities for student members who are widely dispersed. SLA admires their drive, efficiency, and effectiveness, and we are proud to recognize the group for their Outstanding Leadership.”

The student chapter is geared toward graduate students who are pursuing careers in special librarianship. In support of student learning and career development, the chapter organizes webinars, virtual and in-person tours of museums and libraries, social gatherings, and business meetings. All SJSU iSchool students are eligible for a free membership in the student chapter.

The SJSU iSchool SLA Student Chapter has been repeatedly recognized for leadership, programming, and technology in the past four years. For more information on the student chapter, including upcoming events and member news, visit the website.