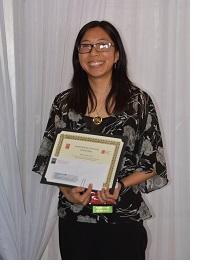 Graduate student and school librarian Suzanne Akemi Sannwald’s commitment to the needs of multicultural students is deeply rooted. When she was recently awarded the California School Library Association (CSLA) Leadership for Diversity Scholarship, she revealed a newly discovered family connection to a librarian’s social justice efforts in the 1940s. Sannwald (pictured left) is studying for her Teacher Librarian Services Credential at the San José State University (SJSU) School of Information (iSchool).

“I recently learned that my grandmother also worked in a school library, when she was in a Japanese Relocation Camp during World War II,” Sannwald explained. Sannwald’s grandmother worked with librarian Ethel Manning who wrote an article for Library Journal in 1942 about her work at Poston Relocation Camp. Sannwald discovered that Manning’s article spurred another librarian, Fern Elizabeth Stowe, to encourage librarians to use education to combat racial injustice. “Now, more than 70 years later, I am proud to be working in a profession where this goal is still valued,” said Sannwald.

According to CSLA, the $1,500 Leadership for Diversity Scholarship was created in recognition of “the need for teacher librarians who reflect the diversity of California’s multicultural, multilingual population.” The scholarship was awarded to Sannwald at the association’s February 2016 meeting, the theme of which was “Doorways to Diversity.”

Currently in her second year as a teacher librarian at West Hills High School in San Diego County, Sannwald is halfway through the Teacher Librarian Program at the SJSU iSchool. She has worked in education and with libraries and technology for 15 years as a classroom teacher, classified library technician, supervisor of district library and media services, and technology manager in higher education, and is pleased to be able to put her extensive skills to work in a school library setting. “Getting hired as a teacher librarian felt like a homecoming of sorts,” she commented, “with all of my various past experiences coming together to complement one another.”

Sannwald has continued to learn more about her personal connections to the history of school librarianship during World War II, as well. After digging deeper into the history of librarians in internment camps, she explained that she uncovered “even more details about Ethel Manning, also drawing me to connections with the much more well-known librarian Clara Breed, who also happened to work in the same library system as my husband and formerly my father-in-law.” Breed instituted a program sending books to Japanese American children relocated to internment camps during the war.

Learning about how her family’s history intersected that of educators and social justice advocates such as Manning, Stowe, and Breed has strengthened Sannwald’s own commitment to librarianship. “As I unravel more of this history, I become even more grounded in my work as a school librarian. My work carries on a legacy that I had never previously known exists,” she stated.

Leadership for Diversity Scholarship winners commit to attending the CSLA annual conference and to serving as volunteers on at least one CSLA committee. For more CSLA’s awards and scholarships, visit the CSLA website.