A San José State University School of Information graduate was recognized as a leader in her community and the profession by the American Library Association with its I Love My Librarian award. 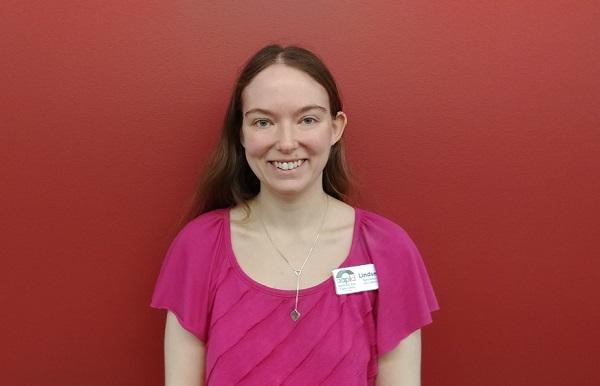 Out of more than 1,000 nominations, Lindsey Tomsu is among 10 librarians across the nation who were selected to be honored by the association. As part of the award process, library patrons are invited to nominate librarians working in public, school, college, community college and university libraries. ALA states there are 160,000 librarians working in libraries of all types throughout the country, and just 110 have received the I Love My Librarian award since 2008.

Tomsu was also named a Library Journal Mover and Shaker in 2013. She said the award was a “momentous event” at the time because never before had a patron – specifically teen patrons – nominated someone for the award. The same group of teens also wanted to nominate her for the I Love My Librarian award shortly after, but nominees must hold a Master of Library and Information Science degree. After graduating from the iSchool in 2017, Tomsu was eligible, but had since moved to Illinois. Teen advisory board members from the library in La Vista, Neb. and Algonquin, Ill. felt so strongly about her advocacy efforts that they worked collectively to nominate her.

“Together they attacked the nomination application with the angle of ‘she’s loved so much, she’s loved in two states,’” Tomsu said, continuing, “You know you’ve made a difference in their lives when they still want to get you the recognition they think you deserve, even if you aren’t their librarian anymore.”

During her eight years in La Vista, she brought in more than $20,000 in grant funds to purchase multiple life-size games, and to create a teen makerspace, a media club and a Building to Uphold Imagination and Learning Daily (BUILD) Collective, which provided tweens and teens with educational materials based around the common theme of building that fostered their imaginations and creativity.

While the teens loved getting to play the game in real life and dressing up as their characters, many said the act of making the game was the most memorable part. In fewer than four weeks, members of the teen advisory board logged almost 400 volunteer hours to make the game a reality.

“My goal with programming is to show teens that the library is more than just books,” Tomsu said.

“It might sound like blasphemy for a librarian, but I always go into reading programs and such telling them that I don’t care if they like to read or not. I just want them to be library users. I want them to see that the library is a place for them and get them to be lifelong supporters even if they don’t enjoy or have time for pleasure reading.”

Tomsu and each of the other I Love My Librarian winners received $5,000 at an award ceremony and reception cohosted by the Carnegie Corporation of New York, the New York Public Library, and The New York Times in December 2018.

The 2018 award recipients include four academic librarians, three public librarians and three school librarians. A complete list of all award winners and additional information can be found at the I Love My Librarian website.