The San José State University School of Information organized three Library 2.0 web conferences during 2020, the 10th year of the Library 2.0 Worldwide Virtual Conference series. Each of the mini-conferences focused on a specific topic addressed by experts in the information professions. The format included an opening keynote panel, concurrent crowd-sourced sessions, and a closing address. Held entirely online at no cost to participants, the 2020 conference series spanned 121 total countries with more than 5,000 registrants for each conference.

The mini-conference series kicked off on March 10 with Wholehearted Libraries: Soft Skills for 21st Century Information Professionals. Nearly 4,800 information professionals, students and educators registered for the free conference that featured 15 concurrent sessions covering the human side of 21st Century information work with a “wholehearted attitude” that nurtures a positive mindset in employees, using the power of stories to promote understanding and extend librarians’ reach into global communities. The conference was organized in partnership with Associate Professor Michael Stephens, who is a renowned speaker throughout the U.S. and internationally on topics related to creative and open uses of technology to support and drive library services and learning. 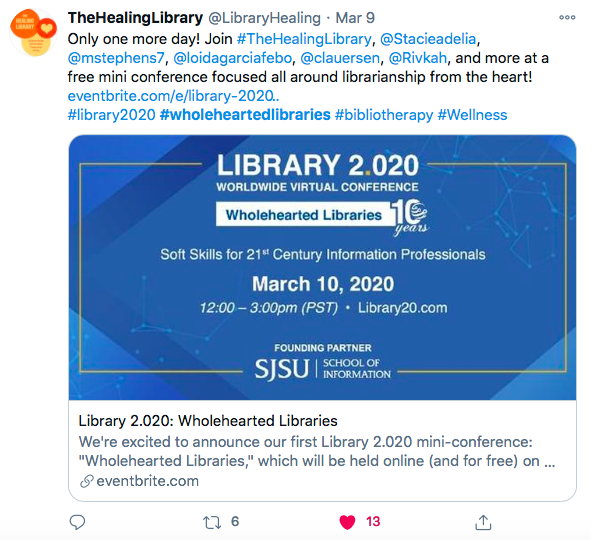 Stephens said he was “so impressed” with all of the presentations for the conference. “We had folks from all over the world presenting on the human service-focused aspects of what is possible in libraries, from meditation programs to reaching the needs of all, no matter who they are,” said Stephens. “The emphasis on soft skills made for some fascinating discussions around what this means for our profession going forward: empathy, mindfulness, taking care of each other.” He noted that feedback from participants who attended the conference had been encouraging, reinforcing the notion that “these are the conversations we should be having right now in libraries.”

The second mini-conference, Small, Rural and Independent Libraries, organized in partnership with Jim Lynch from TechSoup and Kate Laughlin from the Association for Rural and Small Libraries, was held on June 17. The conference, which attracted more than 5,800 registrants and had 10 concurrent sessions, focused on innovations to address challenges often faced by rural, independent, tribal, and other small libraries. Topics discussed included methods to provide Internet access and training to rural patrons, new ways that small libraries can offer services that big urban libraries offer, tools available to foster idea exchange among employees from small and rural libraries, and how to take community partnerships to the next level.

As senior writer and editor of TechSoup for Libraries.org, a San Francisco-headquartered high-tech nonprofit with a mission to “tech up” charities and public libraries worldwide by providing software, hardware, and the knowledge to use them, Lynch is one of TechSoup’s primary presenters at conferences in the U.S. on nonprofit, foundation and library technology.

To prepare for the conference, Lynch worked with Steve Hargadon, founder of Library 2.0; Sandra Hirsh, associate dean for academics at the SJSU College of Professional and Global Education and co-chair of the conference; and Kate Laughlin, executive director of the Association for Rural and Small Libraries. Lynch recalled that the conference was organized “very skillfully” over email and Zoom, and acknowledged that Hargadon, who had organized virtual conferences for several years prior to the COVID-19 pandemic, may be “the most expert person in the country” when it comes to organizing virtual events. “It was fun to see how organizing a complex event with many speakers is properly done,” Lynch said. “If you haven’t had a chance to see him in action, I recommend attending any one of the upcoming Library 2.0 conferences. I don’t expect that virtual conferences will go out of style any time soon.”

Along with Lynch, opening keynote panelists included Laughlin of ARSL; Jennifer Pearson, library director at Marshall County Memorial Library; Melanie S. Toledo, library manager of the Ak-Chin Indian Community; and Dianne Connery, director of Pottsboro Library, who also led a concurrent session: Connecting the Community – Digital Inclusion. Crosby Kemper, director of the Institute of Museum and Library Services, delivered the closing keynote: What Does Community Mean in the Age of the Coronavirus?

The third mini-web conference, Sustainability in Libraries, wrapped up the series on October 14. Organized in partnership with Rebekkah Smith Aldrich, executive director of the Mid-Hudson Library System and co-chair of the American Library Association’s Special Task Force on Sustainability, the conference attracted 5,600 registrants who could pick and choose from 15 sessions that explored what libraries are doing today to align their core values with the “Triple Bottom Line” of sustainability—the intersection of environmental stewardship, social equity and economic feasibility—to encourage investment and build support for their libraries in the future.

“Organizing the conference was a great experience because there is a huge and growing international community of library professionals working on programs, services, projects, and partnerships that embody a triple bottom line approach to librarianship, which meant we had a ton of session idea submissions and record-setting attendance at this Library 2.020 conference,” said Smith Aldrich, who noted that this was one of the first occasions of international cooperation on the topic of sustainability in libraries. “While ALA is in the early stages of promoting this topic and IFLA has an established reputation on this front, the cross-pollination and celebration of efforts across the globe is a very positive sign that library leaders are truly taking a leadership position in their communities, on their campuses, and in their schools on the topic of sustainability,” she remarked.

Smith Aldrich delivered the closing keynote and felt encouraged that “communities of practice within the profession are coalescing, which is how we accelerate the work that is so necessary, given the urgency of the impacts of climate change and the current economics and political theater we have experienced recently.”

Hargadon, who co-founded the Library 2.0 Worldwide Virtual Conference series with Hirsh in 2011 as a way to facilitate topical discussions among information professionals worldwide, said the soon-to-be-announced Library 2.021 mini-conference series will once again be held in March, June and October, with the March conference bringing the long-running bilingual (Spanish and English) Seguimos Creando Enlaces conference online.

“This event fosters community connections and cultural diversity in public, academic and special libraries,” said Hargadon. “In past years the event has welcomed library workers from both sides of the California-Mexico border to share best practices and work towards more inclusive library spaces for all.”

Seguimos Creando Enlaces’ partners include the U.S. Institute of Museum and Library Services under the provisions of the Library Services and Technology Act, administered in California by the State Librarian; the SERRA Library Cooperative; the Southern California Library Cooperative; and San Diego State University. With its in-person conference canceled in 2020, bringing the event online and advertising to the more than 60,000 followers of the Library 2.0 events is anticipated to draw an expanded set of speakers and attendees.

Register as a member of the Library 2.0 network to be kept informed of future events.