Kelvin Watson was named director of the Broward County Libraries in February 2017. Prior to coming to Broward, Watson was the chief operating officer, senior vice president for Queens Library in New York City, which serves 2.3 million people and circulates among the highest number of books and other library materials in the country. Watson is credited with innovative community outreach to establishments whose clientele have not been active patrons of the library such as community centers, hospitals and jails. Watson’s background in addressing the digital divide helped library customers understand how to use technology and realize how these tools can impact their lives.

At Broward County Libraries, he’s launched a number of innovative initiatives that have expanded the community’s engagement with the library. These include the Veterans Connect Hotspot Program, which provides free portable Internet service to veterans, active-duty military and the dependents; the “Your ID is Your Key” initiative that makes digital library cards available to all Broward County Public School students; and the launch of the GoChip, a device preloaded with a season of a premiere TV show that customers can check out. Broward County Libraries is the first library in Florida, the first in the Southeast, and one of the first 12 libraries nationwide currently offering the GoChip to customers. 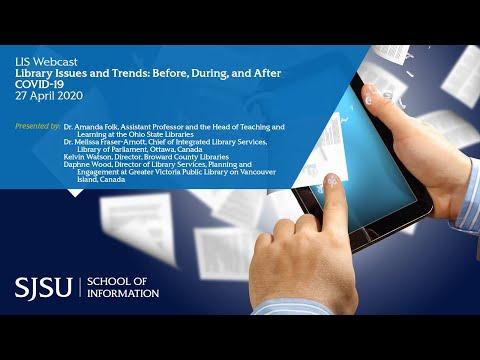 Library Issues and Trends: Before, During, and After COVID-19

Libraries are ever-evolving. As the community changes and grows, so does the library. When a pandemic hits, the library must adapt to it, too. Join us for this webcast and learn more about current library issues and trends, including how to handle a crisis like COVID-19. Guest speakers address questions, such as:

This webcast is brought to you by the SJSU School of Information’s Leadership and Management Program Advisory Committee. 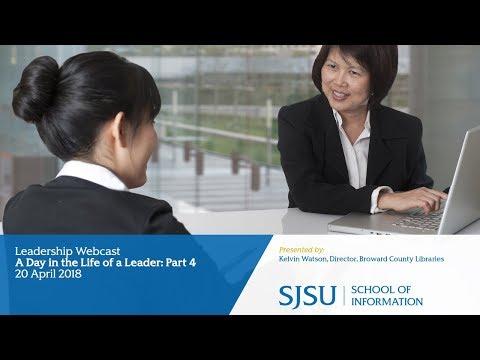 A Day in the Life of a Leader: Part 4

Please join the co-chairs of the San José State University School of Information’s Leadership and  Management Program Advisory Committee, Drs. Susan Alman and Cheryl Stenstrom, at 10:00 a.m. PDT for the final webinar in a four-part series on pursuing a career in leadership as an information professional.

Each speaker will be sharing their perspective on the most important responsibilities and attitudes for leaders, as well as ways they suggest students can practice leadership skills while they’re still in grad school, or early in their careers.

This session will feature Kelvin Watson, the director of Broward County Libraries in Florida.