A visit to the VCARA Village on iSchool Island in Second Life is an escape to a special oasis where imagination prevails and deadlines don’t exist.

Have you explored VCARA lately? You might be familiar with its better-known Grecian features where we host webcasts, hold meetings, and build exhibits. But what lies beyond the ancient, academic landscape?

If you move past the Ampitheatre, past the Dome, past the Resource Center, you will find a special oasis–an escape from studies and responsibilities where imagination prevails and deadlines don’t exist. An abandoned (or is it?) pirate ship lurks near the bank, daring passersby to enter the abode just around the corner.

Upon entering, you’re thrust through time. Quaint Colonial buildings line the stone walkways. Spread throughout the space, you’ll find hidden sights and treasures in the surrounding homes, furniture store, church, school, lighthouse, and yes–there is even a jail.

This is VCARA Village. 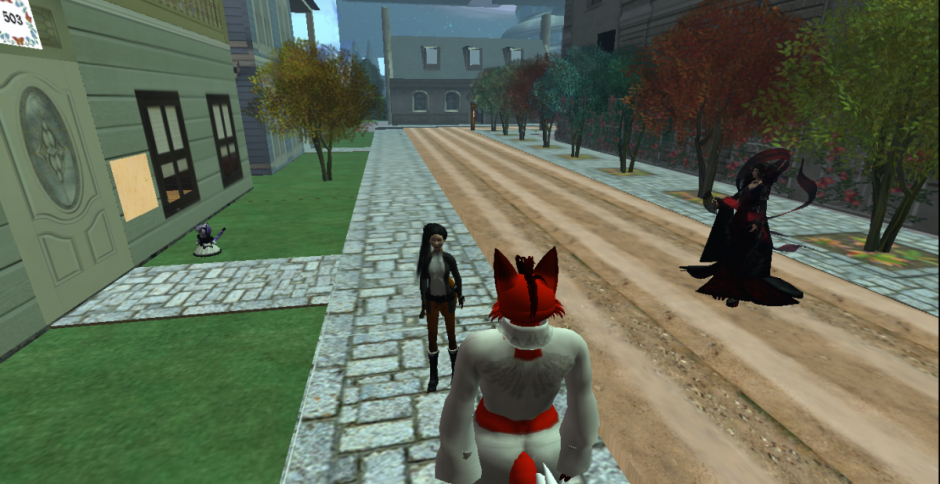 On Monday, August 29, 2016, VCARA students and alumni enjoyed a tour of VCARA Village on iSchool Island in Second Life. During the tour, new students had the opportunity to select a house of their own! We also took time to relax with tea and muffins in alumna Jeni Crummey’s virtual house.

VCARA Village began its life as the Boston Build — dreamt up for a possible iSchool class (before this editor’s time!). Unfortunately, low registration forced the class’s cancelation. What to do with this beautiful, abandoned landscape? Enter the VCARA team.

While we haven’t ruled out a Colonial Boston-based virtual worlds iSchool class in the future, we have adopted and opened the space to iSchool students, alumni, and faculty.  The buildings in VCARA Village make excellent canvases for anyone interested in designing, building, modeling, or scripting in virtual worlds. And while you’re having fun, you just might pick up valuable skills for your ARA or LIS career!

If you would like a house of your own, please contact Dr. Pat Franks. The space is free for iSchool students, alumni, and faculty.

For information about joining VCARA in Second Life, please refer to our VCARA for Newbies blog post. To request an orientation to Second Life and/or VCARA, please email Dr. Pat Franks (patricia.franks@sjsu.edu)