Mnemosyne Seminario: The Face of VCARA 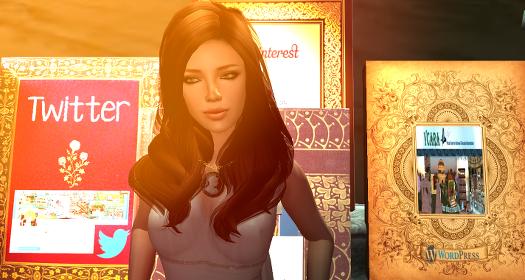 Who is this mysterious woman, and how did she come to represent VCARA?

Rather than represent one person, Mnemosyne acts as an alter ego for the entire VCARA team. She acts as our gatekeeper, the official team mascot, and holds the power to build and dissemble our lands. The VCARA team also refers to Mnemosyne as Ms. and MS.

Where did that name come from?

Though such imaginative names are not strictly necessary (my SL name is alysedunavantjones), the culture of fun, strange-sounding names in virtual worlds is so prevalent that more “normal” names often stand out!

But strange as our avatar’s name may seem at first, there is logic to our madness. The name Mnemosyne comes from the Titan Goddess of Memory and Mother of the Muses. And Seminario is Spanish for seminar, deriving from the Latin seminarium: nursery/seedplot. So you might interpret Mnemosyne Seminario as overseer of memory and caretaker of inspiration for a group of graduate students. Check out our About page and consider–is this an apt description for the Virtual Center for Archives and Records Administration (VCARA)?

If you meet Mnemosyne Seminario in Second Life or on social media, feel free to say hello, ask questions, and offer advice or suggestions for VCARA. But take note: If you meet MS regularly, you might notice she has multiple personalities with varying memories and skills!