Those who attend the March 29, 2020 reading of The Tale of the Trader and the Jinni (as translated by Richard F. Burton) as part of the Fantasy Faire LitFest in Second Life were transformed back in time not only through words but also their surroundings. 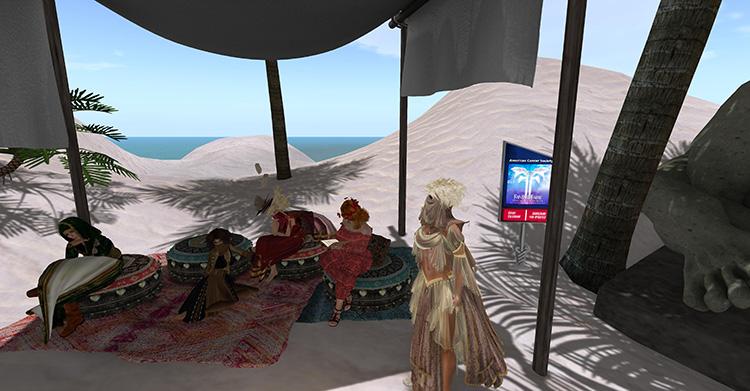 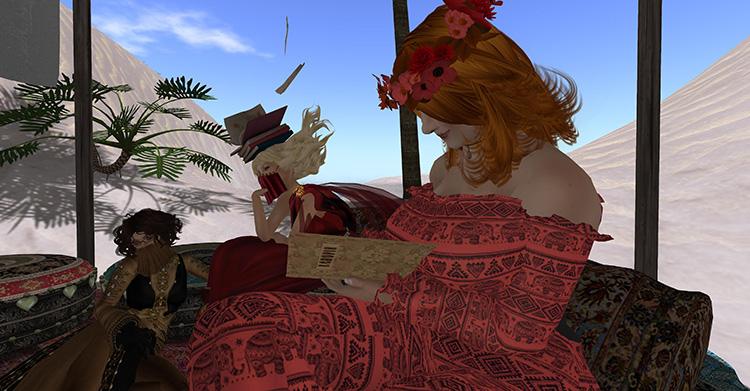 Our moderator was Dr. Pat Franks and our readers were: Alyse Dunavant-Jones. Bethany Winslow, Valerie Hill and Kit Mason.  Alyse was not only a reader but also responsible for the adaptation of this work for this SL performance. 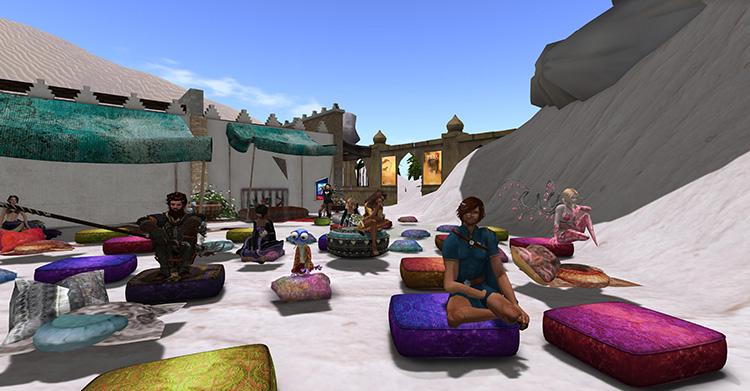 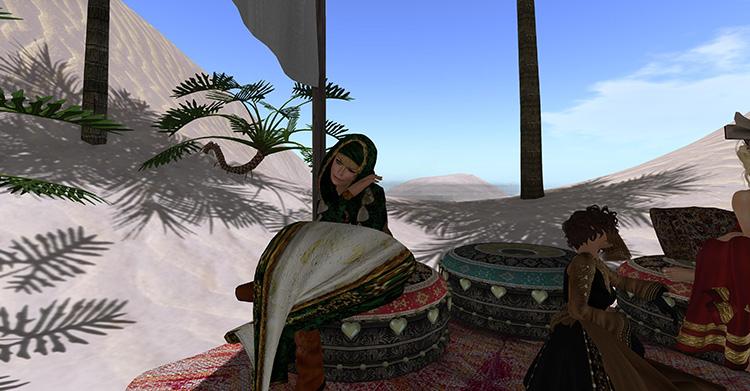 The introduction is reproduced here to entice you to watch for the YouTube Video, which will be available in a few weeks.

The Tale of the Trader and the Jinni began on Shahrazad’s first night with King Shahryar.

After both he and his brother were betrayed by their wives three years earlier (and after being forced to “dally” with a Jinni’s wife against his will), the King has lost faith in all women. After all, if even a Jinni cannot control his wife, what chances does a mortal man have?

So for each night until now, the King has married a virgin and forced Shahrazad’s father, his Wazir, to execute each girl the following morning. For he dare not trust any woman to remain faithful beyond a single night.

After three years of this barbarism, the only virgins left in the kingdom are Shahrazad and her younger sister Dunyazad. Unable to fulfill the King’s command without sacrificing his own daughters, the Wazir faces death.

Against his wishes, Shahrazad volunteers to share the king’s bed: “Either I shall live or I shall be a ransom for the virgin daughters of Moslems and the cause of their deliverance from his hands and thine.”

Of Shahrazad, it is said that “she had collected a thousand books of histories relating to antique races and departed rulers. She had perused the works of the poets and knew them by heart; she had studied philosophy and the sciences, arts and accomplishments; and she was pleasant and polite, wise and witty, well read and well bred.”

With her charms and brains, does Shahrazad stand a chance against this brutal and damaged king?

Against this backdrop of storytelling, conversations were taking place in the chat around current perspectives on this work:

Regarding: the portrayal of women in 1001 Nights: Based on today’s reading so far, do you think 1001 Nights is pro- or anti-feminist? Somewhere in between?

Today’s reading portrays violence, adultery, rape, and slavery. Thus far, do you find its portrayals offensive? Does the history and fame of 1001 Nights make a difference?

1001 Nights has a lot of adult content, yet many of its stories are known to children of all ages. How old should a child be to read this story? Do you have any favorite adaptations from 1001 Nights for children?

Return often to this blog to keep track of the activities taking place surrounding both VCARA and CVL as members adapt and learn to use new technologies like VR and AR while taking advantage of the benefits of virtual worlds such as Second Life for immersive experiences like role playing and storytelling.