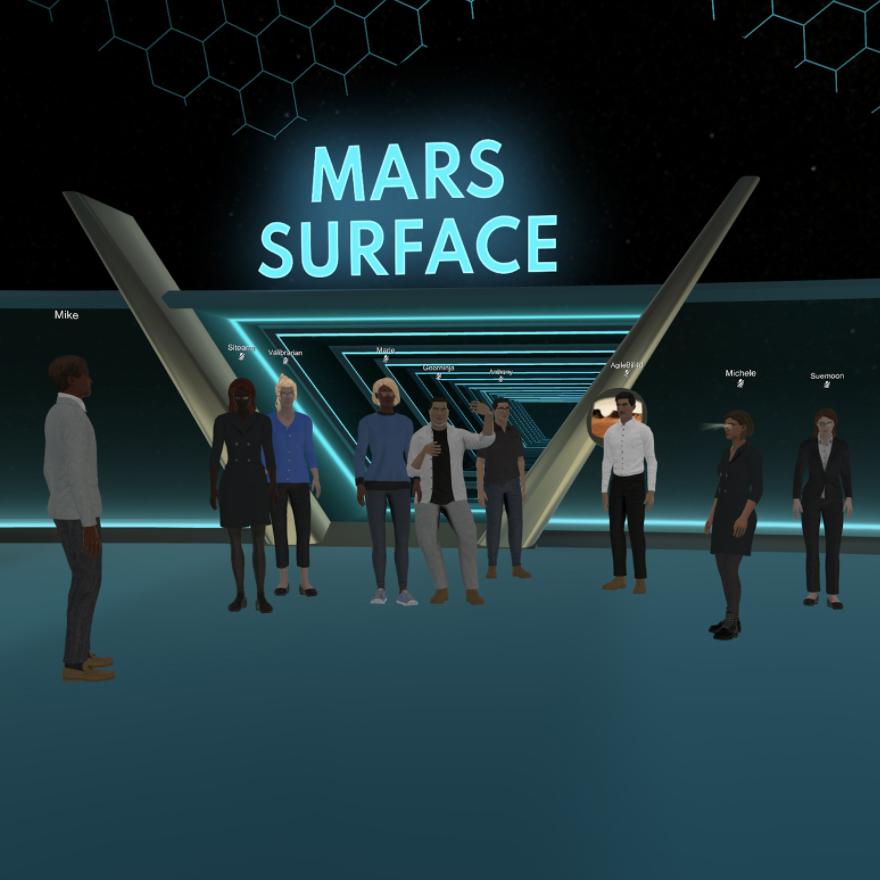 The Exploders gang met June 18, 2021, for another adventure! This time we went back to EngageVR. (The last time we had been there was March of 2020.)

For this visit there were 10 of us. We had the usual suspects and several new friends including Anthony (a colleague from SJSU’s eCampus), and a VR developer coming in from Uganda. It was 3am for Mike in Uganda, but that’s just the VR Exploder style of dedicated adventurer we love to have!

As always, it’s a little like herding cats to get good pictures when people sometimes get bounced out or are having trouble navigating themselves for some reason. Pictured above, we’re standing in front of a teleporter to the surface of Mars. I was a bit disappointed that I wasn’t able  to take a selfie this time in-world, but the flip camera mode would not include my avatar. Also, less than half the photos I took actually got saved.

Other things I noticed, some people had audio issues in-world (a fairly common experience) so we used Discord voice, but there didn’t seem to be any way to communicate via chat in-world. This is terrible for accessibility! I kept looking for a way to text chat, but we couldn’t even friend each other. EngageVR is billed primarily for educational use, so it really seems designed for a teacher to bring in students and sort of “drive” the experience. Marie also noted that we were no longer able to go to the Bodleian Library, a nice environment modeled after the library at University of Oxford. She reports it’s apparently available only with the paid upgrade version of Engage now.

One of the three environments we visited was an open area with a model of Stonehenge I’d been to before. Both Sitearm and I noted that is wasn’t very remarkable. You can walk around models of this in Second Life, and I’ve also got a model of Stonehenge at my OpenSim world Limiland. The sit feature was a little wonky, as you can see in the photo below. We sort of look like we were squatting in front of the benches! But wonky animations are not uncommon in Second Life and other places. Another issue was that this was a private environment, but Marie found it was limited to 8 people and we had a group of 10. So a couple people couldn’t get in! 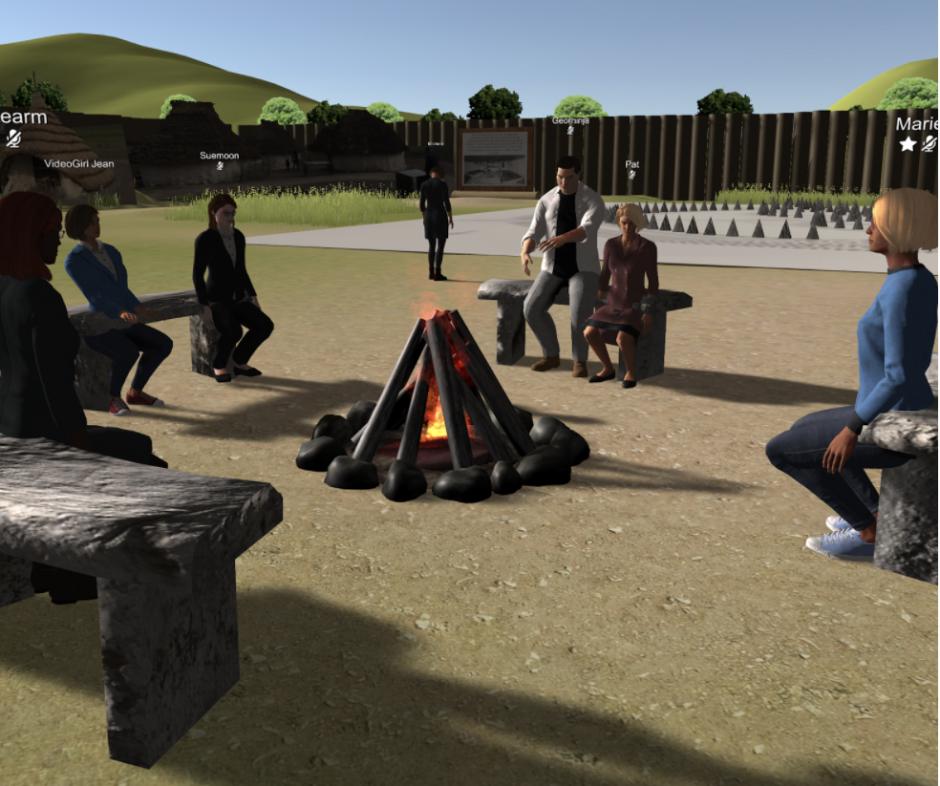 We ended up going to some public spaces; the space station and then the Mars environment. The space station is really nice, and the surface of Mars has a model of a rover with embedded audio and video. I was most excited about the teleportal though. You can walk around it and it looks different from both sides. From the front (not shown in the picture below) you can see that if you walk through it you’ll end up back at the platform in space. From the back however, you can see right through the portal. (And yes, if you walk into it from behind, it TPs you back to the space station!) 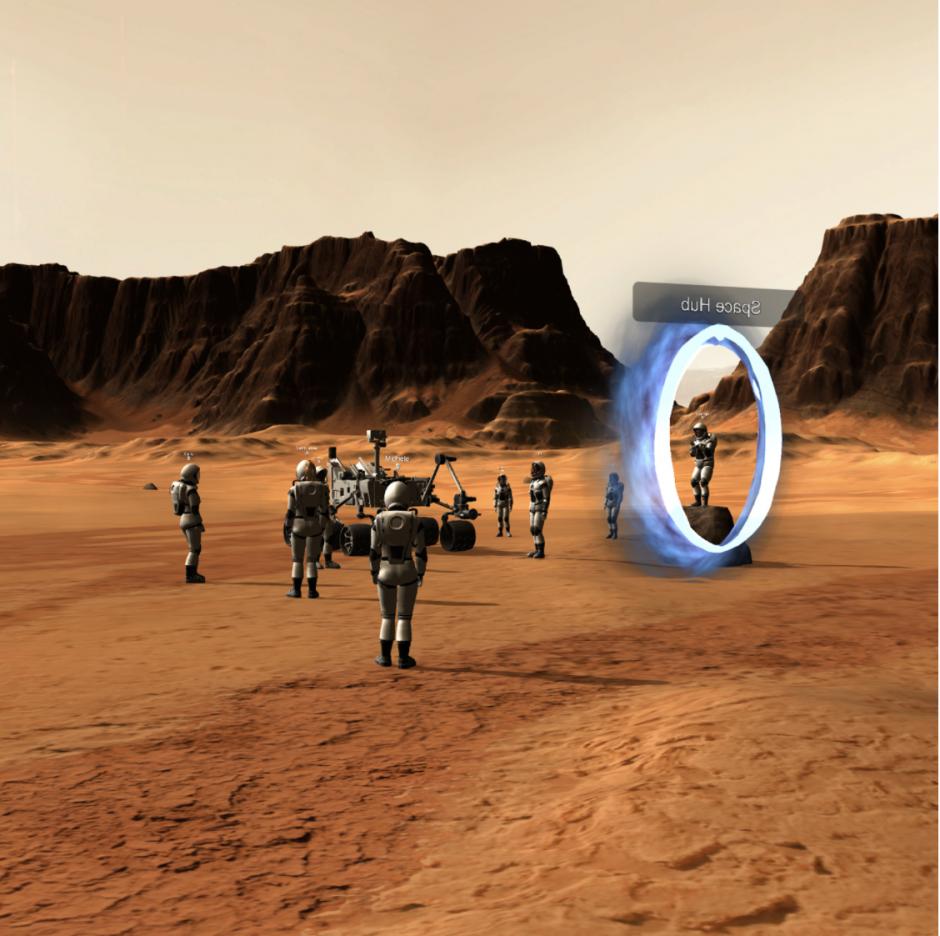 The VR Exploders usually meet on the third Friday of every month at 5pm PST. (In July we’re meeting on the 23rd though.) If you’re interested in joining us, email bethany.winslow@sjsu.edu and I’ll arrange to get you on the list. You might also follow my personal blog (Burning Man in Cyberspace). Since joining the School of Information, that’s my new blog where I’ll continue to write about conferences presentations and other in-world things I’m involved with, like these VR Exploder outings. I’ve also started live streaming these on YouTube which lets me easily capture the hour-long outings on video. If you’re interested, look for those videos on my blog.