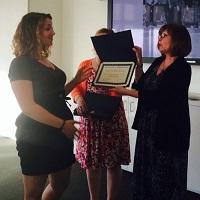 Taking to Twitter, the first cohort of the Institute for Research Design in Librarianship (IRDL) excitedly displayed their #IRDL certificates after completing the nine-day research program, designed to help academic and research librarians become skilled researchers and mentors.

Nicole Branch, one of the IRDL scholars and an alumna of the San José State University (SJSU) School of Library and Information Science, expressed that the institute provided a great opportunity to develop research skills and learn from the best in the field. “Over two weeks, our cohort was provided top-notch instruction on each phase of the research process and various methods for approaching research topics in information science,” Branch said.

Faculty members Dr. Lili Luo and Dr. Michael Stephens from the SJSU information school collaborated with scholars from Loyola Marymount University in planning the first institute, which was held in June 2014. The IRDL is funded by a three-year grant from the Institute of Museum and Library Services.

According to Luo, an expert in research design and one of the institute’s co-lead instructors, “The IRDL scholars were very motivated and interested in doing research.” She explained, “I truly enjoyed my conversations with the scholars. It’s nice to see how their research idea evolved during the two weeks, and I think by the time they left the institute, they all had a much more concrete plan about their research design and methodology.”

John Jackson, a reference and instruction librarian at Whittier College who attended the institute with fellow SJSU information school alumni Branch, Susan Hoang, and Jane Skoric, stated that the research-focused session helped him formulate “a targeted research question and specific objectives all supported by a carefully laid out methodology.” Jackson said, “IRDL gave me the knowledge necessary for conducting rigorous quantitative and qualitative studies, and it also helped me to see why such methods are necessary for moving our field forward.”

Luo believes that the IRDL participants “will help raise the bar for conducting research in LIS by producing quality research and disseminating it.” Indeed, sharing their knowledge is an important goal of the IRDL scholars. “Because of my experience in IRDL, I feel prepared to participate in our field in a new way, adding to the body of knowledge in information science,” said Branch, who works as a librarian for research and digitization at Holy Names University in Oakland, Calif.

Approximately 60 academic and research librarians will attend the IRDL during a three-year timespan. In addition to onsite instruction, institute participants will receive ongoing mentoring and support throughout the year, as they complete research projects. Luo, Stephens, and lead instructor Dr. Greg Guest will use feedback from the first cohort of scholars to prepare for the next two institutes, which will be held in June 2015 and June 2016.