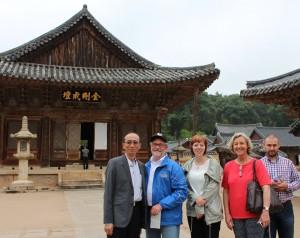 This is my third CIRI blog post and my second containing a focus on LIS developments in/from/about Asia.

My new book Transforming Young Adult Services was announced and promoted in the Summer 2013 ALA/Neal-Schumann catalog. And there it caught the attention of the National Library for Children and Youth in South Korea.

As it has for the past 6 years, the staff of the NLCY peruses the world’s new LIS publications, prioritizes the work they find that best addresses their current concerns and interests, vets the authors, and then invites five of them each year to Seoul to speak with the country’s youth specialist librarians at an annual two-day symposium.

SLIS’s former faculty, Dr. Adele Fasick, had been invited to speak at an earlier NLYC symposium.

I accepted the invitation to serve as the keynote speaker at the 7th annual symposium which took place this last June. The program included representatives from the Bibliotheque Nationale de France (Paris), the Russian State Library for Young Adults (Moscow), the Chinese University of Hong Kong, and the head of the British NGO Booktrust (London). I was also asked to deliver a second presentation concentrating on a more specific area of my own research in YA services.

Aside from extending world-class hospitality to our little group during the 4-day stay, and in addition to making our respective presentations before the symposium’s plenary body, our group of five invitees met with the Chief Executive of the National Library of Korea (who oversees the NLYC) as well as spent considerable time with the Director General of the NLYC. I took the initiative as well to conduct a one-on-one interview with the Director General to inquire about larger trends she detects in developing and delivering library service to Korea’s youth.

Due to my previous experience with LIS in Asia, I know that their library staff are educated and trained to the bachelor’s degree level. There are 32 library schools, for instance, in South Korea and none of them offer a master’s degree.

Thus, in preparing my keynote address I was aware that the symposium’s audience, youth librarians though they are, would include few people familiar with many of the theoretical and conceptual frames we study, research, and teach in graduate-level LIS programs in the United States.

My address was entitled “Libraries Meeting Youth Needs: Service Transitions in the United States.” My core question asked about an older “vision” of youth services and how it contrasts with what I characterized as a still-emerging new vision. My thesis, embedded in an historical analysis, attempted to document (through specific examples) the shift in U.S. libraries, particularly young adult services, over the past generation: to become more “user-centered.”

It is important to note that I did not approach my address or my audience as someone coming to lecture Korea’s youth librarians on so-called “best practice” or present successful “models” of superior service. I have seen this approach play out in many international venues in which practitioners from the United States simply assume that their practices, methods, skills, and techniques soar over those of other practitioners. I have seen this manifested in our LIS literature, as well as at IFLA conferences among others. Most of these assumptions are made without evidence or context.

My own aims in Korea were more modest. I attempted only to characterize the development in the U.S. from the earlier dominance of institutional goals as the driving force in youth services, to a more contemporary and progressive vision of youth services increasingly informed by the desires, meanings, and experiences of young people themselves.

But neither were my comments uncritical of our own work. While this transition to a more user-centered vision is not familiar to many places abroad, a user-centered focus continues to represents a clunkily-executed, challenging, and even still-frequently misunderstood transition in the west as well.

As I discussed in my talk, the transition to user-centeredness may sound like a no-brainer to many of us trained and currently practicing in the west, it nevertheless remains frequently and poorly executed in daily service. A study I recently completed documented that, despite decades of rhetoric about the importance of “involving youth in the development of YA services,” few institutions actually included youth in the design or renovation of library space to appeal to them. Instead, unreflective “legacy” practices continue to be perpetuated by institutional ritual, repetition, and culture.

Many examples highlight the unreflective practice continuing in today’s youth services. And after “setting the stage” (as it were) in my keynote address I called attention to several such practices in my second presentation, “Ask Not What Your Young Adult Volunteers Can Do for Libraries, But What Libraries Can Do for Young Adult Volunteers.” In this presentation I demonstrated that many libraries are not evidence-based, systematic, or creative in exploiting the service potential of the YA volunteer experience. Instead many remain committed year after year to unsupported or unsupportable claims about such things as Summer Reading Programs, ritual commitments to narrowly defining “outreach” efforts (and only with schools), as well as to privileging materials and such things as book prizes over the development of a comprehensive and professionally-developed service profile.

The audience found the presentation on YA volunteering most intriguing. That topic occupied a reported 60% of all of the Q&A time. If you would like to read the research from which that presentation was drawn see: Bernier, A. (Summer 2009). Young adult volunteering in public libraries: Managerial implications. Library Leadership and Management 23 no. 3, pp. 95-112.

This annual NLCY event is impressive for many reasons. There is, of course, the on-going and economical attempt to continually develop the skills and services of their youth librarians. Korea has only a fraction of the capacity of libraries in the United States and yet they maintain a strong commitment to exposing their staff to new ideas, practices, and concepts.

But what struck several of us in the visiting party was the international scope and nature of this conference. I am hard pressed to name a single library or LIS institution in the United States that actively scans the world for new research, presenters, or publications and then invites the sharing and dissemination of these insights with staff.

When was the last time you scanned an Asian LIS publication announcement (in any language) and pursued interest in it? When was the last time your search for new materials included authors, scholars, and research in French, Russian, Chinese, or even English materials from other countries? Do you know a national-level library, in the United States, that has sponsored and hosted people working in LIS (to say nothing of youth services) on a visit to share their work with us?

Of course, SLIS is doing more than its share in annually sponsoring our free 2-day Worldwide Library 2.0 conference leveraging the School’s online conferencing resources. This innovative effort brings together scholars, practitioners, and students in both real-time as well as recorded sessions to address a wide variety of topics and issues.

As SLIS continues to embrace an international student body, an increasingly international faculty, openly invites others interested in LIS, and offer an international Ph.D. experience (Gateway) it is clear that we are thinking more deeply about envisioning our work on par with the impressive Korean vision of LIS and librarianship.