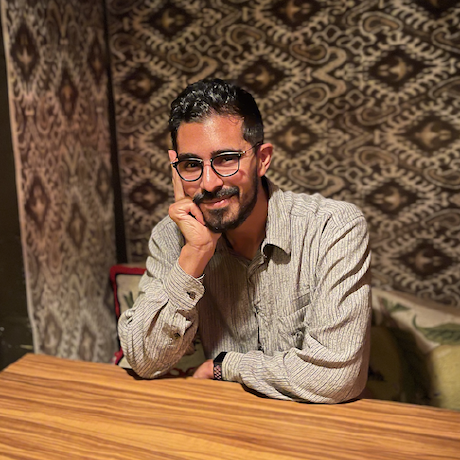 Chris Lopez started his academic journey with an undergraduate degree in Biblical Studies at Palm Beach Atlantic University, followed by attending Divinity School at Fuller Theological Seminary – and for much of that time, the idea of working in libraries was not even on his radar.

Chris describes himself as hungry for stories of all types and a lover of learning things. His initial journey into Biblical Studies allowed him to begin to consider where religion and arts and culture intersect.

“In my divinity school, [there was a] conversation around the theology of film and multiple art forms as well. So that’s where my initial jumping point into the next interest of storytelling, collecting stories and gathering people around these different narratives really began.”

During this time, Chris ended up working in the David Allan Hubbard Library branch that covered religious, psychology, and intercultural studies.

“In my time there, I was starting to see where my overlaps with interest-gathering communities, holding their stories and getting platforms to others to share their narratives, and seeing how that all really happened within librarianship. So I began to invest a little more energy and time and thought in my work as a circulation assistant and talking with the librarians there. And that’s when library school first had a blip on my radar because they were like, ‘you know, you can go to school for this.’”

Going to School for This

As someone who already had a graduate degree, they told him that it would work well in academic librarian spaces, where an additional Master’s is often required.

Chris feels that divinity school helped him hone his human-centered approach to work, which he feels translated well into a lot of the various pedagogical discussions around libraries today. While Chris originally thought he was going to pursue theological librarianship or something else connected to religious studies, his journey at SJSU helped expand his horizons as he discovered instructional design, technology, and ethics in librarianship. Part of his success came thanks to his finding the support of one particular SJSU instructor, Dr. Villagran.

“As a student in a virtual asynchronous learning environment, having her as one of the consistencies throughout my whole program was essential. Being able to update her on things was helpful because then she could say, ‘okay, you’re in this phase now of your journey. And here’s what you could be thinking about.’” From classes to portfolios and marketing himself as someone with a new MLIS degree, her advice meant the world to him.

Chris also recommends that students take a variety of classes to see what they’re most interested in, especially when it comes to learning about emerging technologies, which can really make them a more appealing candidate for your job search after school.

For Chris, that was coding and data science, which can easily be connected to digital humanities and are very attractive skills in school library spaces.

“Without that exposure, I would have never been really interested in collaborating with the data science librarians at UCLA on topics like data literacy.” This allowed him to ask questions like, “What if we made an intro to data literacy webcomic? And because I had a nice understanding of the concepts, not necessarily the understanding of the technical skills, but then when that was successful, people were interested. So you just never know what taking that outlier course can do for you.” 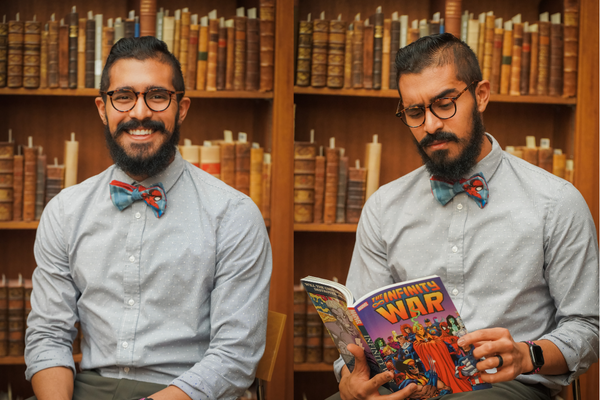 One of Chris’ special interests is comic books and comic book librarianship.

“Really, the religious studies and the culture and popular culture interests for me, are in comics librarianship. I’m interested in how libraries utilize the form of sequential art to communicate, instruct and use it as a mode for students to self-express, and create their own mini-comics. And then finally, being an advocate for comics in the classroom, as required Learning Objects and how to build on them.”

There are still a lot of people who do not believe that reading comics, for example, counts as reading.

“A lot of this suspicion or stigma around comics still kind of is stemming from the anti-comics crusade in the early and mid-50s,” Chris explained. Before then, there was a much wider range of comic book genres, but the age of McCarthyism came around with its fear of anything potentially anti-American or explicitly patriotic, and then comic books became heavily regulated by the federal government, causing only the most patriotic stories (specifically superhero comics) to survive. The 60s and later brought on more underground comic movements and changes that are only now fully appreciated for what they were, as that larger history of colorful, America-loving (and perhaps unserious) comics were seen as the norm, that even though there are now graduate studies programs developed around the comic book medium, the old stereotypes still exist.

“I think that shadow of the stigma of like, ‘it’s not really reading’ or ‘it’s just a gateway drug into reading’ or [is] still is there and it’s something that comics librarianship is always working against. We have a great space to really explore what we can do in that area, but it’s definitely something of a larger national, international level. Comics and librarianship are still growing.”

As a recent graduate, Chris admits that the job market can be tough, but finding grad study jobs at college libraries can be a foot in the door, something he did by working as a Public Services Assistant at the Charles E. Young Research Library in UCLA.

“In-house hiring is definitely something I saw happen to graduates. One person graduated from UCLA and the other person graduated from San José. Both were library assistants at UCLA and applied for open librarian positions around them. And both got those positions because they made themselves valuable and trustworthy. So if you can find a way to embed yourself early on in an institution where you are, I would.”

Then it comes down to playing the waiting game. For Chris, he did not see anything opening up for him at UCLA anytime soon, so he began looking towards the east coast, and back to where his family lived. A couple of months after moving back east, three librarian positions opened up in the humanities and digital humanities libraries, so you really never know what might open and when.

“It is tough at the start because we all have this need for living wages, but if you’re fortunate to find something that could keep you going, for the time being, building that relational investment in those spaces could pay off in that way.”

Luckily, for Chris, though he felt he had missed his chance to work in a library he had invested time into, he had his chance at the Borough of Manhattan Community College (BMCC).

Today, Chris works as the Student Success Librarian at the BMCC Library, a relatively new position that is ever-evolving and gives him room to decide where to put his focus.

It is not simply about working with students to succeed — as all academic librarians do, there is room for him to focus on topics important to him and the students he interacts with, like civic and social justice and even mental health and wellness.

“Another part that was really helpful was vocational clarity. So, we do have librarians that help with the individual, specific task-based research work, maybe like extended research projects, but [they also help] student’s sense of ‘what do I want to do with my life; where do I want to go?’”

Providing resources to help students begin to determine their paths, and even what he called “alternative academic success consulting”: finding additional paths to showing academic comprehension than the traditional research paper or assignment, from anything like comics to podcasts and videos.

Collaboration has been a large part of his work, too, learning to think beyond academic success as one thing and into student affairs.

Chris’ series of recommended books starts with Emergent Strategy Shaping Change, Changing Worlds by Adrian Marie Brown, which he feels really helps with problem-solving and taking an anti-colonial approach to pedagogy and librarianship.

His next recommendation is Work Won’t Love You Back by Sarah Jaffe, which is helpful, especially in this culture of burnout.

Then, for comic readers, and people hoping to get into comics, Chris recommends Unflattening by Nick Sousanis, a Ph.D. dissertation in the comics art format.

“It’s very dense visually, textually, theoretically, but it’s also in some ways amazingly accessible. I definitely recommend it if somebody is like, ‘you can’t be serious with comics.’ I’m like, well, let’s start with Unflattening and just have conversations after that.”