Christina Chavez Nelson On Finding Her Destiny in Library Work 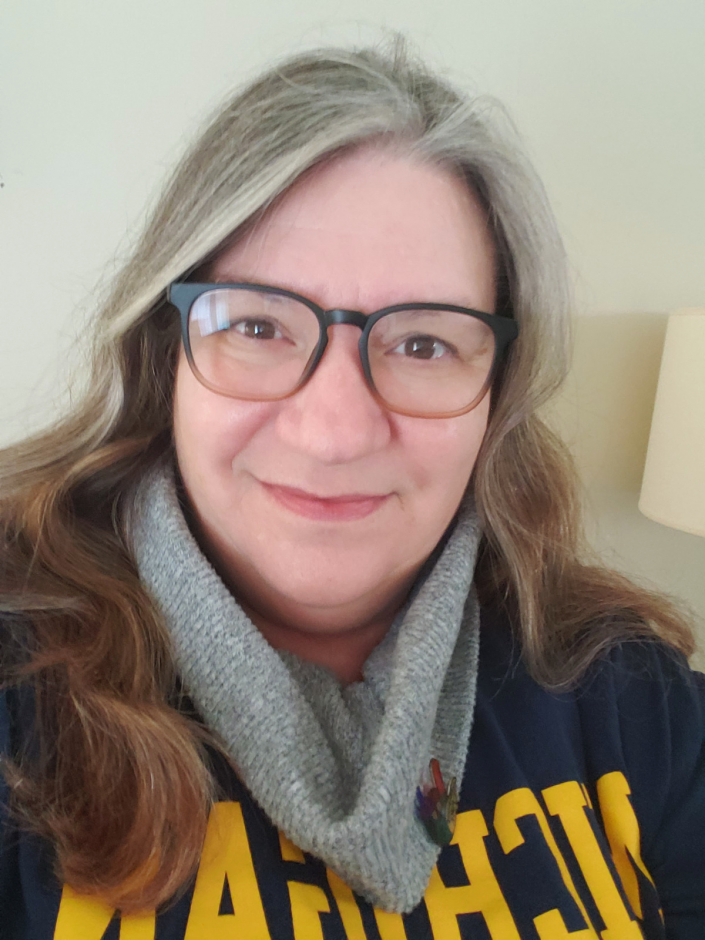 “I would definitely tell my younger self, don’t get married to the idea of the traditional journey. That’s not gonna be your life. You’re gonna do it in all different kinds of ways. And you know what, that’s okay, too. Just keep going with whatever is working for you. Life really is too short and you don’t want to sit there with your what-ifs.”

For Christina Chavez Nelson, her path to librarianship felt like unfinished business.

“It’s funny because I have been going to libraries my whole life. I cannot remember a time when I haven’t gone to libraries. I was the first granddaughter on my paternal grandparent’s side, and my grandmother was really excited that I loved books as much as she did and asked if she could be the one that would take me to the library. Some of my very earliest memories of libraries are my special date with my grandma going to the children’s room.”

As she got older, Christina would also walk herself to the local library and back, and, as a student, Christina remembers visiting librarians in elementary school that would spend time with the kids, both from the school library and the public libraries from nearby. But Christina didn’t consider a career in librarianship until she had grown up and finished her undergraduate degree and found herself at a hiring fair in NYC that led to unexpected opportunities.

“Once upon a time, I worked for the New York Public Library in New York City as a children’s librarian trainee in the early 1990s. I was supposed to go to Pratt Institute — I had been accepted for their Master’s in Library and Information Science. But I got married and moved back to California instead. There’s a line in the musical Broadway Bound: ‘Love is a definite career killer.’ In my case, it killed that career pathway. And it wasn’t so much a regret that I didn’t get to continue. It was more. It always felt like unfinished business in the back of my mind.”

As the years passed, her dream of actually attending graduate school remained. After talking with friends and doing her own research, San José State University surfaced at the top of her list.

Propelling her desire further, Christina had a near-fatal cancer scare which really helped shift her passion and priorities into perspective, so that by the time she was in remission and had found some promotional materials in her inbox about going to the iSchool, she decided to check it out more seriously.

“Once that happened, it felt like my life was taken off hold. Before, it was just waiting around to make sure that I was okay because it felt like it was so awful to start something again and not finish it. Then after that email, I [went to] some of the prospective students’ events that they had, and it just made me felt feel like it was the right time in the right place… even though I was concerned about being a parent of a teenager, working full time and then taking on a Master’s at an advanced age while dealing with chemo brain… so far, it’s been great.”

Not long after starting her program, Christina’s dad, an SJSU alum, was also recently diagnosed with pancreatic cancer, and she and her family rallied around him.

“That may mean slowing down on units [after this semester], but definitely will keep going until graduation happens before the deadline of 7 years.  My dad says he loves hearing me tell about what I’m learning, & the joy he hears in my voice makes him smile.  Another awesome way LIS professionals have given purpose to my life.”

In the beginning of the fall Christina began her program with INFO 203, as all new students do, and enjoyed the start of her grad program. The peer mentorship that came with this course allowed her to talk to another current student about her concerns about her workload and balancing her classes while also teaching middle school full time.

“There have been a couple of times where I’m like, I don’t know if I’m giving them what they want. And in 204, that’s happening more often but I at least have my team for my group project to work with and they’re awesome people. I [recently] got an assignment back and I got extra credit for it. The feedback all across the classes has been very complimentary, but also specific in a way that I know the track to go on for future assignments. So that’s been very helpful.”

As she takes on INFO 204, Christina admits that all of the talks about specific careers and pathways were intimidating at first.

“There’s a part of me going, ‘I’m getting older and I don’t necessarily need a career anymore,’ but I do feel like I got this second chance at life by beating cancer and I don’t want to waste it. I would just love to work in a branch again because public librarianship was awesome. It was fantastic work. But I really liked the idea of some of the specialty library possibilities too, and thanks to a close family friend in nursing, I’ve developed an interest in medical libraries, too.”

Reflecting on Her Heritage

As a Latinx woman, Christina has reflected on the way that the current culture in libraries has begun recognizing the diverse subcultures that make up the Hispanic community.

“What I would like to see more of in libraries is a discussion about those of us that are mixed. Representation, cliche as it sounds, does matter, but more importantly, understanding that Hispanic/Latinx people are not a monoculture. We come in all different shades of skin, different political stances, and different religious/anti-religious beliefs.”

Christina’s father is of Scandinavian descent, and her mother’s people came up and settled in what became New Mexico. Even growing up in a diverse city like Stockton, the representation for people of mixed race was fairly scarce.

“Kids used to just flat out come out and ask me what I was. Growing up in the 70s and 80s, people thought they had gotten past racist things. My best friend was a Chinese American mixed kid and my mom jokingly called us beigies (brown + white). Unfortunately, many people of different mixtures are not always welcomed by the larger group from which they spring.”

Promoting inclusivity and intersectionality are just two ways that Christina thinks libraries could help these diverse communities feel more united, even with their wide differences and backgrounds.

Though she’s just finishing her first semester, Christina has advice for anyone hesitating to give their own grad school journey a shot.

“If you’re second-guessing it, that’s totally normal, but it will be worthwhile. Don’t talk yourself out of it. If it’s something you really feel in your heart and in your gut that you want to do, just tell your brain to take a rest and go for it.”

Overthinkers, Christina feels, often talk themselves out of a good thing — avoiding falling into that trap (especially when people, jobs, or schools are already saying “yes” to you even with your imposter syndrome) can make all the difference.

“One of the good things is knowing I’m at a point in my life where I don’t have to climb some kind of ladder. In fact, the closer I got to 40 and then from 40 on, I realized I don’t have to be nice all the time anymore. So if something’s wrong, I feel much stronger about speaking up and advocating for others first. It’s still hard sometimes to advocate for myself, but I don’t have to put up with stupid stuff either.”

And even though Christina knows her path to librarianship does not look like most people’s, she also knows that is okay.

“I would definitely tell my younger self, don’t get married to the idea of the traditional journey. That’s not gonna be your life. You’re gonna do it in all different kinds of ways. And you know what, that’s okay, too. And the longer you live, the more people are on that same page. Just keep going with whatever is working for you. Life really is too short and you don’t want to sit there with your what-ifs.”

“It’s a very teeny tiny little book, but it’s filled with a lot of heart and it is about community. Every chapter is a different character and so you definitely see life through their eyes and then you get to see how they’re all tied to what will become a community garden. I’ve read it multiple times to different classes, and every time I read it, it’s like I see something new.”