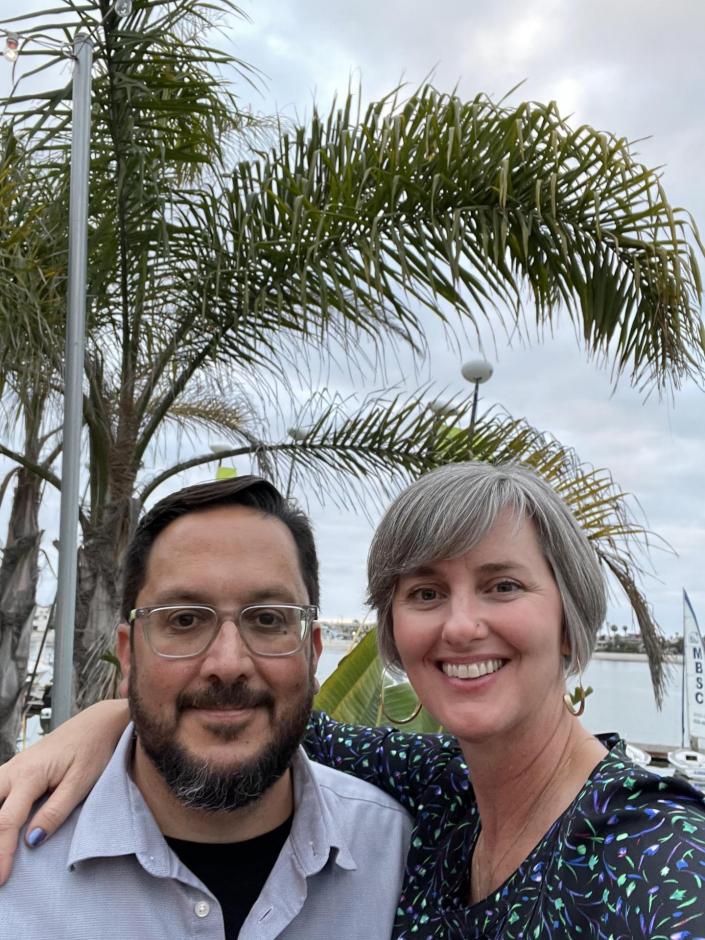 “Data impacts everyone. And that’s what this program is about – helping gear a person towards how to use that data and make sense of that data, protect that data, and leverage that data for health care and all kinds of industries.”

Keith Fernandez entered the IT industry when things were just getting started. At just 20 years old, Keith was a community college student set on getting his computer science degree when he had the opportunity to work in IT as a student worker.

“Back at that time, in the late 90s, a lot of those positions were so new, they weren’t real sticklers for you having your college degree, you would just do the work and understand it,” Keith explains. “And I was able to just figure things out and kind of move up the chain and then do okay, within the industry.”

Thanks to these new opportunities, and his ensuing marriage to his high school sweetheart, Keith’s college journey was put on hold while he was introduced to the technical world of IT security and network engineering through the back door.

Keith is at a place in his career where he manages engineers, but to continue moving on up, he needs a specialized degree that would equip him with the unique skills required in today’s information landscape. With his goals set high, Keith made the decision to go back and finish his education at the School of Information at San José State University.

Going Back To School

As a transfer student from Grossmont College, Keith is one of the first students to experience SJSU’s Bachelor of Science in Information Science and Data Analytics (ISDA) program and expects to graduate in the spring of 2023.

Keith expressed that it was the unique nature of this program that really drew him to SJSU and the iSchool specifically, especially compared to most other computer engineering or business administration degrees:

“This was a really interesting alternative, one that had information science and data analytics combined instead of just all the old stuff that most of the other programs cover.”

Another decision point in choosing the iSchool was that a lot of data analytics programs are only offered as master’s degrees — and while Keith intends to pursue graduate studies after finishing his bachelor’s program, his background and level of interest in this field propelled him to look for something that would allow him to more immediately follow his curiosity.

“My take on it for the degree is that someone could start a career in data analytics, and deal with big data sets, or big pieces of data and be able to help a business or government kind of make decisions or be able to interpret the data or kind of help with like machine learning or potentially even artificial intelligence down the road is being able to kind of curate, I guess, data, which was kind of interesting to me.”

One unique draw of joining the iSchool was that he was able to help encourage his wife Alyssa to pursue her lifelong passion of going to library school. Since beginning his studies she applied, was accepted, and will start her Master of Library and Information Science program in the fall.

Having met at West Hills High School in 1990, Keith can remember messaging Alyssa after she was accepted to her program to say, “Hey, we haven’t been in school together since we were kids.”

When asked if returning to school felt like a big adjustment after his time away from school, Keith explained that he had not ever stopped his academic journey, not really. Thanks to remote and asynchronous learning options, Keith was already used to taking virtual classes even before the pandemic – something that allows nontraditional students to pursue their education on their timeframes and gives students like Keith a chance to find their own success.

Keith admits that his academic journey has not always been easy for him.

“I never did extremely well in school in the past but I have a renewed interest in it and it’s all very interesting. I found that I’m much more engaged with this degree program than I’ve been in the past, and also I have a lot of experience in these areas and in this field. So a lot of it comes kind of naturally to me, but it’s also been very challenging.”

This last spring was the first time Keith had to reach out to get tutoring to keep up with the course load and expectations, but it paid off: Keith finished the semester with a 4.0., making the President’s List.

“I don’t really have a good roadmap for it…,” Keith says, “Other than just hard work.”

As someone who has kids in college himself these days, he holds a different perspective than most traditional students and credits some of his success to SJSU, which has made it easier for him to stay engaged in courses, know what is expected of him, and find the resources he needs when he needs them.

He also cannot help but approach the field of information science differently than his peers who do not have the same amount of experience he brings to the table.

“I’m used to information systems in information technology, but the classes I’ve taken have been really interesting to see historically how books or data has been classified. Being able to draw a correlation between a piece of your data from your iWatch that’s up in the cloud somewhere with like, what they used to do with clay tablets, in Ancient Greece or something has been so interesting to me.”

Advice For The Future Of Data Science and Security

The last decade has allowed the field of data science to explode in a major way, and Keith says that thanks in large part to our smart devices, society generally is just creating and generating data to an unprecedented degree, and Keith anticipates SJSU’s unique ISDA program will hold a draw for other students hoping to get their foot in the door of this industry.

“It impacts everyone,” Keith says. “And that’s what this program is about – helping gear a person towards how to use that data and make sense of that data, protect that data, and leverage that data for health care and all kinds of industries.”

All you have to do is look at government mandates and news coverage over the last few years to see data science in action – the COVID-19 pandemic has been one very real demonstration of how data is collected and how people try to make sense of it and leverage that information statistically.

For students and other individuals with an interest in data science, Keith recommends reading The Signal and the Noise: Why So Many Predictions Fail but Some Don’t by political forecaster Nate Silver. It covers how data science has been used historically all the way to the 2016 U.S. election and what a lot of pollsters got wrong about collecting data.

At the end of the day, it is a science degree, and Keith warns prospective students that getting ahead with coding languages like Python or Linux is one way to keep from becoming overwhelmed and falling behind.

For Keith and others in his field, they can only see data science continuing to grow in popularity as time goes on: “As more businesses and government agencies learn the value of a lot of the data out there, I think it’s going to keep growing and growing.” Comparing data to the oil industry in the 1800s, Keith feels that we’re only just beginning to scratch the surface of just how powerful holding and controlling data truly is.