Essraa Nawar embraces her diversity to foster dialog and support for underrepresented communities.

Essraa Nawar is passionate about using her diverse background as an Arabic, Egyptian, American, Muslim woman to make the world a better place. She envisions the library as a space to provide support for all members of the community, and to share knowledge about different worldviews, with the hope that more talk equals better understanding.

Born in Egypt, Nawar has worked in Qatar and Washington, D.C., and is currently in Southern California, where, as the only Muslim woman on campus, she’s become an essential part of the Chapman University library team. Nawar didn’t always know she wanted to be a librarian, but now she can’t imagine life without LIS.

Libraries All Over the World 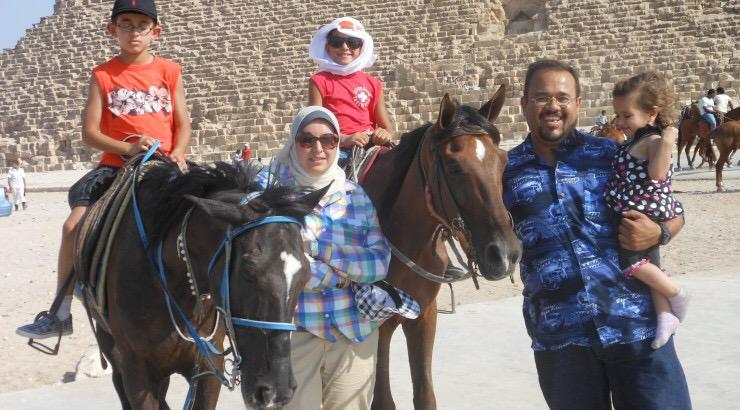 In 2002 Nawar was in Washington, D.C., working for the Royal Embassy of Saudi Arabia. At the time, with a BA in Commerce and an MBA, Nawar was pursuing accounting, until she realized that’s not what she wanted to do at all.

Nawar (picured above with her family) returned to Egypt and got a job at the Bibliotheca Alexandrina, one of the biggest public libraries in the city, where her education and international work experience made her the perfect fit for work in acquisitions and gifts.

But when her husband got a got an offer to join the Chapman University faculty, Nawar and her family left Egypt and moved to Southern California. “My heart was breaking leaving my job, family, friends and colleagues,” Nawar remembers. But then she connected with Charlene Baldwin, dean of Chapman University libraries, and things started to fall into place. 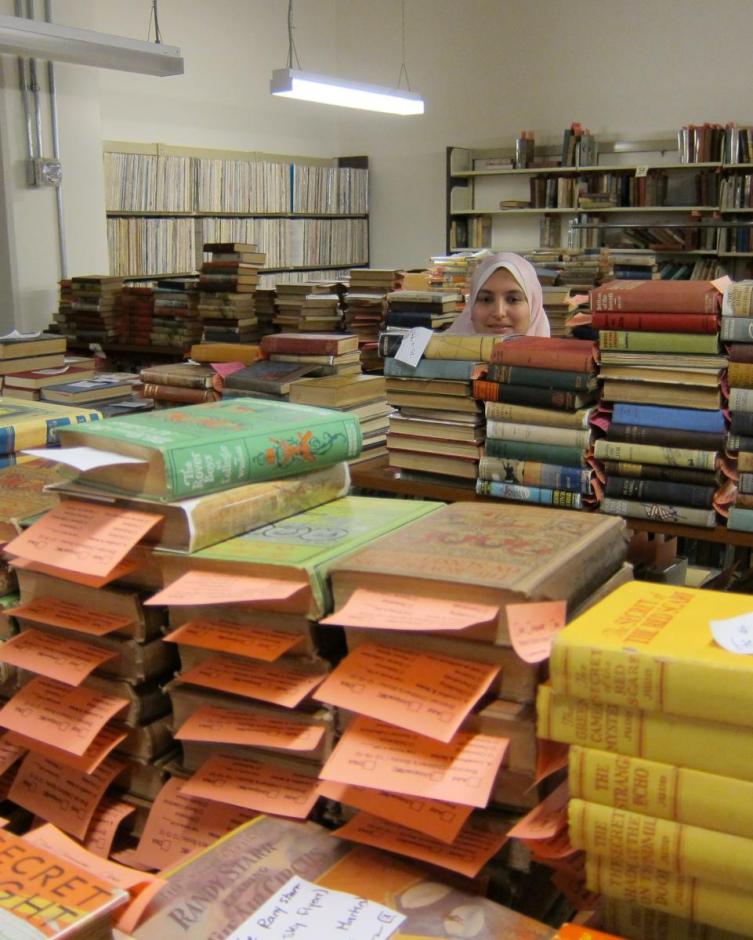 Due to her dedication and work ethic, Nawar soon moved into a temporary job sorting through 7,000 vintage children’s books stored in the basement of Chapman’s Leather by Library, preparing them for cataloging. Nawar was grateful to get her foot in the door, and realized the opportunity she had. When a job as assistant to the dean of communications and marketing opened up, Nawar was hired and soon became an integral part of the Chapman library team.

“That was in 2011,” she says, “and since then my job has expanded; opportunities just opened for me in ways I didn’t expect. I call that the story of climbing the ladder and moving from the basement to the fourth floor, from a volunteer to the administration team!”

Nawar used her experience in Alexandria to jump-start the library’s marketing plan, and was able to show the university how important marketing, outreach and fundraising are to the library. She now reaches out to other Arabic and international students and works with the campus interfaith center, which cosponsors cultural events with the library.

“In 2011 when Arab Spring was taking place across the world, the dean wanted to do something,” she recalls, “so I helped put together an exhibit that honored the Egyptian revolution. The outreach has helped so many people at the university and it was a wonderful experience, a partnership with other librarians and people across campus.”

“Having that diverse background actually helped me on the job,” Nawar emphasizes. “I really thank the dean and Chapman for allowing me to use that background in a positive way, rather than hiding in my office and thinking, I’m so different from everyone!

“I’m only the only Muslim woman on campus, so I am representing diversity. All these experiences added up to who I am today, and what kind of work I will be able to do and contribute to the library profession. They made me who I am.”

Bringing it Back to Books 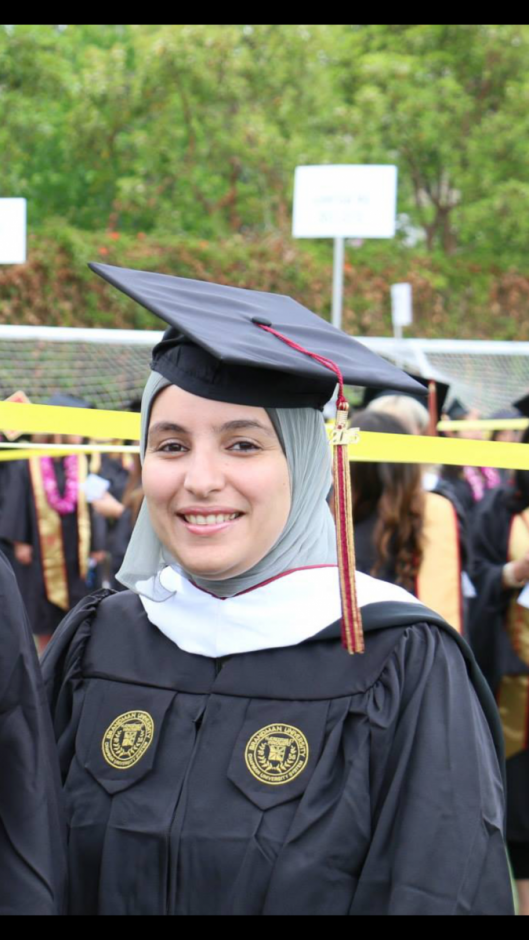 Nawar has always seen herself in leadership positions, using all facets of her diversity to bridge communities. During her first years at Chapman, she enrolled in the Master of Arts in Organizational Leadership program at Brandman College, Chapman’s online offshoot, and was soon promoted to the library’s coordinator of development, overseeing a team of three. It was when she completed the MA program that Nawar realized what she really needed was the MLIS degree.

“I really feel like I need the education in library science,” Nawar says. “I know how libraries run, I’ve managed budgets, I do all the events in the library, I know how to do collaboration; but I still need to have the LIS terminology and the background, and I already see the difference in how I do my job on a daily basis.”

She turned to the San José State University School of Information for its convenience and cost, diving into the Leadership and Management Career Pathway with a focus on programming and outreach. “I’ve been used to online education, and it’s extremely convenient for someone who works full-time, is a full-time parent, full-time wife, and engaged in the community,” Nawar explains. “The iSchool is one of the most affordable programs, with a high quality of education, and the reputation it has all over the country is that it is the best program, nationwide.

“It’s very crucial that I continue learning in order to be able to understand the information cycle, information communities, databases, and why they’re important. And it’s not just important to learn that to be a librarian, but to be a fundraiser, to be able to articulate that vision, the importance of libraries to donors—it’s just crucial. If you don’t have that knowledge you won’t be able to articulate that well.” 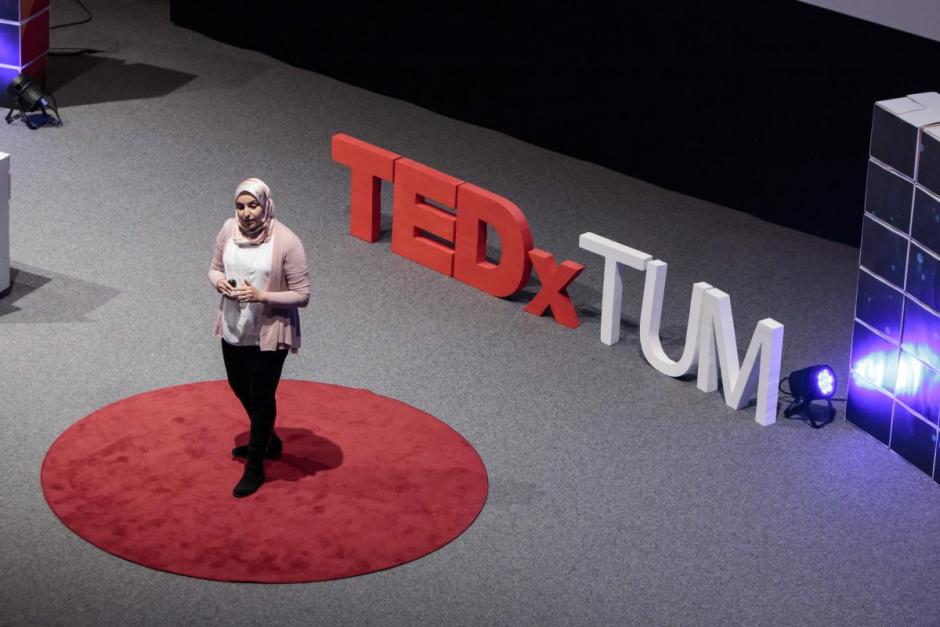 Nawar has never seen her diverse background as a challenge to achieving personal and professional goals. She began writing a column for the Huffington Post in 2014, sharing stories like “What I Learned When Moving to America” and “What Nobody Tells You about Muslims and Arabs.” When she saw how her words resonated with readers, she was inspired to do even more: in 2015 Nawar realized another big dream and gave her own TedX talk on “Feeling Welcomed and Empowered.” “I feel like every single person who works in the library has something to offer,” Nawar states. “I feel like these diverse perspectives and backgrounds bring something to the job. When people share these things, as librarians, we’re just being part of that conversation and change. And with the push of diversity on campus, on libraries, in corporations, people are looking at diverse backgrounds and being globally minded. Libraries can be at the forefront of all of these things.

“I felt like there’s a narrative that needs to be shared, and mine is a very positive story.”